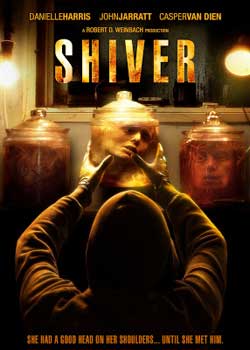 After surviving an attack at the hands of a vicious serial killer known as “The Gryphon” Wendy thinks that her ordeal is over. In reality her problems are only beginning as her attacker soon begins stalking her, determined to stop at nothing to finish what he started and killing anyone who gets in his way. Can Wendy stay one step ahead of him and escape with her life in tact or is she destined to be just another one of his victims?

Based on the novel of the same name by Brian Harper, Shiver is just an all around excellent movie. It is fast-paced, interesting, and has an awesome cast that does a great job of bringing the characters to life. Before I watched it I thought to myself Here we go, yet another cookie cutter serial killer movie just like the last five or six that I’ve seen recently but I’m happy to admit that I was wrong. I ended up really enjoying this movie and think that it has a lot going for it. In a lot of ways it reminded me of the awesome old suspense/thrillers from the 1990’s (which is the biggest compliment that I can give it as I believe that this was the greatest period for these types of films) and I had a blast watching it in general.

One of the things that I liked most about this movie was the fact that it moves at an extremely fast pace and doesn’t beat around the bush. There is always something happening for the biggest majority of the movie and since I have an extremely short attention span at times and tend to get bored easily I was satisfied. Things start off pretty quick with a brutal death scene right off the bat and the action doesn’t slow down for the remainder of the film’s running time. There comes a point when The Gryphon kidnaps Wendy and takes her hostage and I was worried that we were going to be have to suffer through a bunch of botched escape attempts on her part that went on for way too long before she successfully discovered a way to get away but thankfully this didn’t happen (I really don’t care for movies that are made up entirely of someone trying to escape a demented tormentor who has taken them captive as I find them to be redundant as hell and just plain boring). I was surprised (and very happy) that he only holds her prisoner for a relatively short amount of time before help arrives and am glad that Robert D. Weinbach (who wrote the script) decided to go this route because it is different and it works. 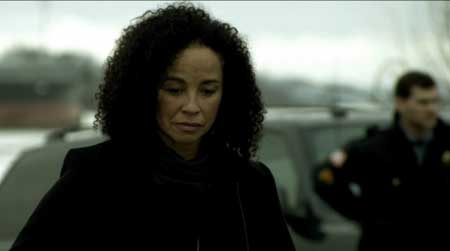 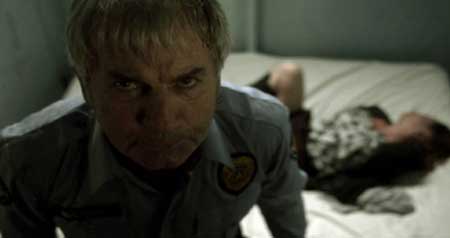 I also really enjoyed the film’s cast as well. I have always been a huge fan of Danielle Harris (I met her a couple of years ago and she is a real sweet person in addition to being awesome as Hell) and she kicks all sorts of ass this time around in the role of Wendy. There is something about the character that is a little sad and depressing at first because she seems to lack confidence (to the point that she won’t ask her boss for a raise), but by the end of the movie she is a changed person who isn’t afraid to fight for her life and stand up to her bitchy, overbearing mother. In a way being attacked and then stalked by a serial killer is a good thing for her because it changes her in a positive way to an extent. I’ve also always dug Casper Van Dien too and he does a great job as the detective who is on the trail of The Gryphon. Of course John Jarrat is excellent as the killer who obviously has a great deal of mental problems and issues with women. The guy is a cruel, sick, and twisted bastard and I couldn’t wait to see him get his just desserts (and he eventually does). I like the fact that he always leaves a calling card after he kills someone (which every good villain worth his salt needs to do, you know) and thought that he was just an all around great character. In general everyone involved in the film does a great job and since I liked the characters it helped me really enjoy the movie. 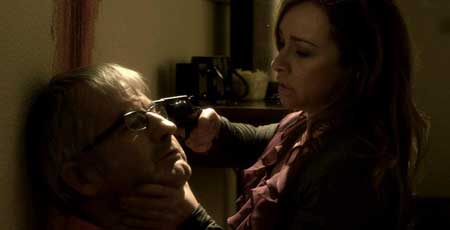 I was also happy with the fact that the movie actually contains quite a bit of blood and gore. Most suspense/thrillers are pretty light on the bloodshed, but that wasn’t the case with Shiver. We get several decapitations, a stabbing or two, and a scene that involves The Gryphon going around blowing people away with a shot gun that is pretty graphic and disturbing. Being a hardcore gore hound I was both thrilled and surprised by how gory the film was at times (especially toward the end when the film’s killer gleefully shows off his warped collection to a shocked and terrified Wendy) as I really didn’t expect it. 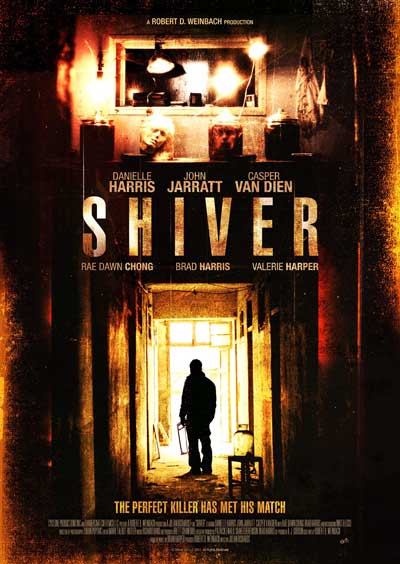 I thought that Shiver pretty much ruled. I enjoyed it and thought that it was one of the best suspense/thrillers that I have seen in a very long time. I really don’t have any complaints about it and think that anyone who enjoys a nice suspenseful movie will really love this film. Check it out if you get a chance, you won’t be let down.