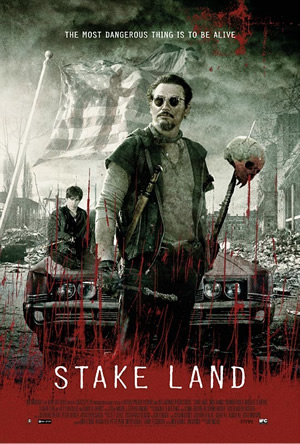 In an instant, Martin’s teenage world is turned upside down. Before he and his family can escape the ravages of an apocalyptic world overrun by viscous, hungry vampires, Martin’s entire family is slaughtered. The only thing between him and certain death is a mysterious vampire hunter named Mister (Nick Damici) who takes Martin (Connor Paolo) under his wing. Together they travel North across the American wasteland heading for safety in Canada – the rumored New Eden. This is…Stake Land.

Stake Land is director Jim Mickle’s toothy take on Zombieland, replacing the zombies with far-from-human, bestial vampires. Mickle’s vision is also heavy on the serious and bleak as hell. While it can be amusing at times, the word “comedy” will never be used to describe Stake Land. The characters suffer horribly, there’s little hope to be found and the fear of death is much more real. This is a grim, hopeless film but no less engaging or entertaining. The acting is superb, not only from the two leads, but also from the supporting cast including Danielle Harris (in one of her better roles) and Kelly McGillis bringing serious acting chops. The art direction is better than the budget should allow and the effects are equally superior. The film’s only faults are its uneven pacing and its depressing, solemn tone which is exhausting and unrelenting. However, the film sticks with you and has its share of unique twists and turns on the vampire myth and legends. 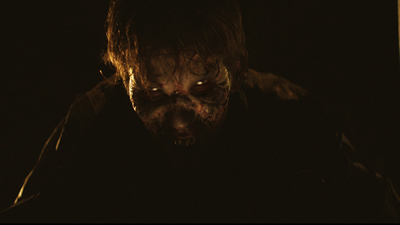 Connor Paolo and Nick Damici as Martin and Mister are structurally similar to Jesse Eisenberg and Woody Harrelson as Columbus and Tallahassee in Zombieland, a film Stake Land will always be compared to. Their relationship even follows the same type of beats with Mister being less of a companion and more of a teacher who’s goal is to transform Martin into a vampire hunter. Both Paolo and Damici are strong in their performances but their bond isn’t as conflicted as Columbus and Tallahassee’s camaraderie. Damici is able to show both a quiet strength and a subtle soft side when needed. They’re a memorable pair. Kelly McGillis makes a surprise appearance in this film as Sister and brings a lot of weight (to an already heavy film) and moral center to the role and the plot. She’s able to convey much of her character’s sorrow and loss with just a look and with the sadness in her eyes. It’s a fantastic supporting role. Danielle Harris turns in a strong performance as Belle, a pregnant bar keep who’s searching for safety and a future in New Eden. She’s both distant and attached to Martin and Mister. She is visibly scared of what the future might hold but is also incredibly determined to reach New Eden. Michael Cerveris is appropriately slimy and obscene as Jebedia Loven. There’s also something likable remaining just below the despicable surface making the character more complex than is should be. 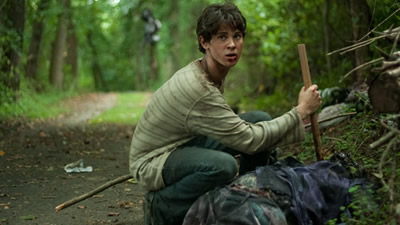 Stake Land’s director, Jim Mickle, has crafted a bleak, unforgiving film.  He has chosen a washed out pallet and a gritty approach, perfect for the subject matter and a strong contrast to the colorful and bright Zombieland. There is very little humor to be found during this film’s run time. But still, this is a road picture and, due to that, Stake Land has an uneven pace with one too many lulls. As a result, a number of characters end up underdeveloped, such as Sean Nelson’s Willie, and it’s difficult to get a grasp on exactly where the characters are. The scenes rarely look any different and without the few signs to cue the audience to illustrate geographic progression, the characters seem to be going in circles. This is exacerbated by the implausible multiple reappearances of the human foes known as The Brotherhood. That aside, Mickle is consistent with his tone and atmosphere. 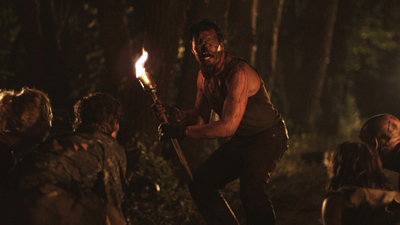 The effects in Stake Land are extraordinary for the budget. The vampires are viscous, oozing with disgusting grit and grime. Looking more like rabid, infected humans from 28 Days Later, the vampires are not the sparkling vampires from Twilight or even the vampires from Dracula or similar legends. At times, they bare a questionable resemblance to zombies. But they are scary and threatening. They also come in varieties which is both visually distinct and well explained in the script. There’s a good amount of blood and gore in Stake Land as well. In one remarkable scene, The Brotherhood are dropping hungry vampires from helocopters behind secured lines into a group of humans celebrating their freedom. The CGI effects are quick and paired with great sound effects to hammer home the thuds of the landing vampires which is followed by the vampires leaping out at the scattering renegades and families, tearing and riping at them. 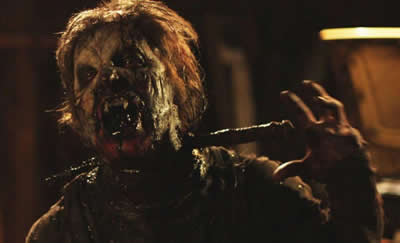 Stake Land is not a fun film. It is bleak and depressing, from beginning to end. The characters are strong and memorable with great performances from the entire cast. The film rises above its budget and overcomes a few early stumbles and missteps. Even though the pacing is erratic, the story is engaging and tense. The vampires are nontraditional and frightening. Much like the film it will always be compared to, it has a strong pair in the leads who earn the audiences concern and compassion. While definitely not a “feel good” movie, Stake Land is still a horror film worth seeking out.