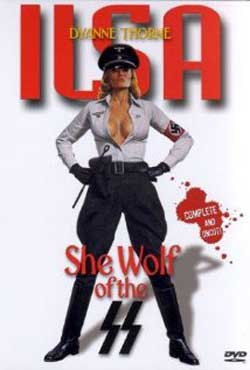 Ilsa is an evil Nazi warden at a death camp that conducts “medical experiments”. Ilsa’s goal is to prove that women can withstand more pain and suffering than men and therefore should be allowed to fight on the front lines

If you looked up “exploitation film” in a dictionary that has lots of pictures and pop-culture references, you might find a picture of the movie poster for Ilsa: She Wolf of the SS. This is a legendary piece of cinematic history that still lives up to all the hype, nearly forty years later. It has spawned sequels as well as emulations for years and years, including a recent resurgence of the Nazisploitation genre with movies like Iron Sky, Dead Snow, The Frankenstein Theory, and many others, not to mention the most obvious homage being paid by Rob Zombie’s fake trailer for “Werewolf Women of the SS” in the Grindhouse double-feature. I’d go so far as to say that it is, still today, a film that falls into the “must see” category for any die-hard horror or exploitation fan. 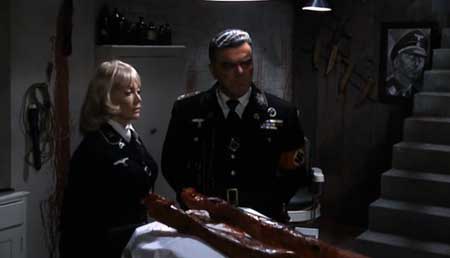 The movie opens with a warning that what we’re about to see is based on facts, followed by a statement from the producers dedicating the film to the hope that none of these things will ever happen again. In the background, the audio of a Hitler speech plays. Then we cut straight to the sex. Ilsa (Dyanne Thorne, who played Ilsa throughout all four installments, a role for which she is best known for, but one that made it difficult to find work for a long time) and a man are in bed having sex, and she begs her partner not finish yet. Unfortunately for her (and later him), he can’t hold off. She takes a shower, then comes back in full Nazi uniform, where she has him taken away by two guards. The next time we see him, he is tied to a table and Ilsa proceeds to castrate him. This quick one-two punch of boobs and blood sets the stage for everything else that follows. 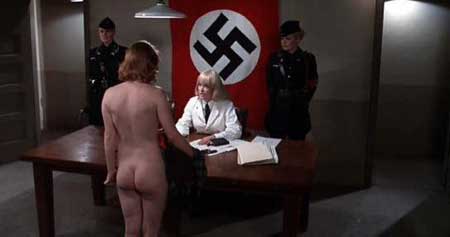 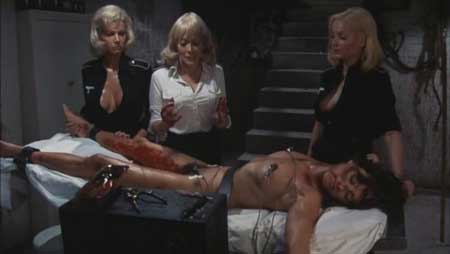 We quickly learn that Ilsa works at a Nazi death camp where prisoners are brought in for experiments. Officially, the men are put to work in the yard, whereas the women are either sent to “serve” the soldiers or for medical research. Ilsa, however, conducts some private research of her own. By day, she is working on proving her theory that women are stronger and tougher than men through a series of experiments on the female prisoners. But by night, she is like a black widow, having sex with male prisoners and then castrating them afterwards.

Then along comes Wolfe (Gregory Knoph), an American prisoner to whom Ilsa takes a liking. He is warned of her routine by a fellow prisoner. When his turn comes along, he employs a special power he says he learned at a young age, that of being able to “sustain” all night (for real, he explains this to his roommates when he returns). And so they go all night. Needless to say, Ilsa does NOT have him castrated, but instead insists that he return to her often. She later has him have sex with her two guards while she watches just to prove to her that he is for real.

Outside of the sex (which there is a lot of) there is also the torture. There are deformed women who have been infected by diseases for experimentation purposes. A woman has her toes torn off, one by one. One woman is boiled in water while another is submitted to high pressure (Uschi Digard, a Russ Meyer favorite, in an uncredited role). There are electroshocks given to women’s genitals as well as genital surgery without anesthesia. At one point, Ilsa pulls out a large, electrified dildo, and while its work is done off-screen, it is still a very disturbing thought. And of course, there is Anna (Maria Marx; fun fact: she is Mario Van Peebles’ mother), the woman is the test subject being used to prove women are tough, who is all but destroyed in Ilsa’s quest to prove her theory. 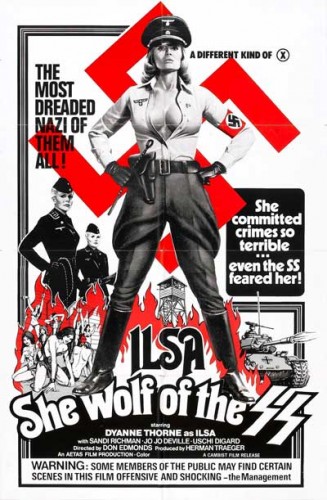 Rather than just being a series of torture and/or sex scenes, there is a storyline following the men and women prisoners plotting an uprise and escape, with a somewhat surprising ending. But that’s not what Ilsa: She Wolf of the SS is remembered for. It is both a women in prison film and a World War II film (shot on the set of Hogan’s Heroes), both softcore and torture p*rn. There are so many sexual connotations to the movie that Freud could have a field day with. And all of this thanks to the collaboration of director Don Edmonds, writer John C. W. Saxton (as Jonah Royston, who also wrote Class of 1984 and Happy Birthday To Me), and producer “Herman Traeger,” who is actually David F. Friedman, co-conspirator with Herschell Gordon Lewis on some of his classics as well as a legend in the genre. 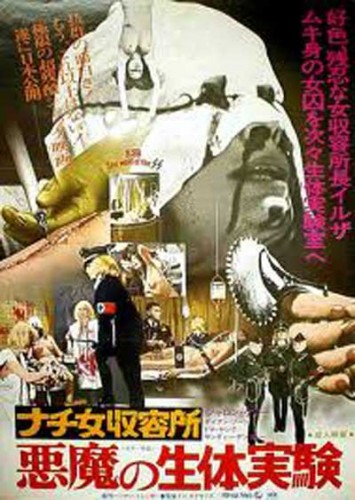 Ilsa: She Wolf of the SS is a Nazi exploitation film that somehow never mentions Jews or gas chambers. There are inexplicably nude or half-nude women throughout the movie. The blood is thick and red like paint, and the guns don’t synch up with the sound of their firing. Many of the actors either never went on to make another movie or acted here under pseudonyms. The story itself is somewhat ridiculous, but even more ludicrous is the idea that there are three sequels (teetering on spoilers, so I’ll just say watch through to the end and you’ll understand). All of this taken into account, this is one of those movies, much like Bloodsucking Freaks or Cannibal Holocaust, that you just have to see, if for no other reason than to recognize its place in the history of your genre. And I think you’ll come away from Ilsa a changed person. Maybe not necessarily for the better, but changed nonetheless. 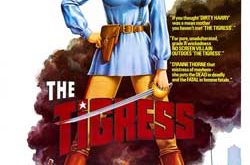 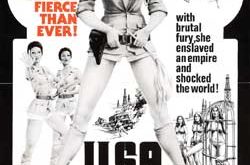 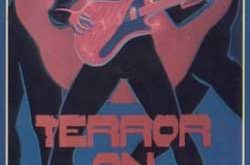