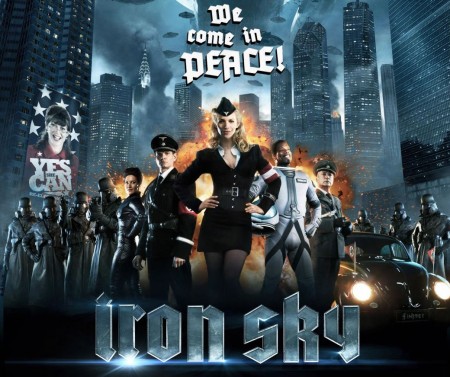 The Nazis set up a secret base on the moon in 1945 where they hide out and plan to return to power in 2018.

After watching the trailer for “Iron Sky”, my expectations went through the roof. Just knowing that the film actually existed was enough to make me a bit giddy. The premise alone is just plain brilliant. I was expecting the film to just be B-movie bliss. That isn’t exactly what we get though there are plenty of crazy moments that brought a few smiles to my face as well as make me feel a bit uncomfortable for laughing. There is much more at play here and the film is much smarter and inventive than I had originally envisioned it. The film is most definitely a satire with a strong message that is delivered in one of the most inventive narratives I have seen in quite some time. I mean really, Nazis hiding out in the dark side of the moon waiting for the right time to launch an assault on Earth. That just makes me want to yell “Hell Yeah!!!” These Finnish filmmakers were not afraid nor do they ever shy away from the political satire, tearing apart recent US foreign policies, amongst other things. And oh yeah, the film has Udo Keir!!!

In 1945, a group of Nazis take flight to the dark side of the moon to build a compound (in the shape of a swastika), where they have found themselves a new leader, Kortzfleisch (Udo Kier). They have preserved their way of life and thinking there. It is now 2018, and Klaus Adler (Gotz Otto) has a few new plans for them. He is ready to conquer Earth. Their scientist Doktor Richter (Tilo Pruckner) has built a gigantic space carrier that is filled to the rim with flying saucers ready to unleash their assault. But they are unable to power the machine with the technology they have on the moon. When an American spaceship lands, they think the astronauts are spies. They learn that there is technology on Earth they need to power the battleship so with the reluctant help of Washington (Christopher Kirby) the American astronaut, and Renate Richter (Julia Dietze) his perfect genetic match, as well as an earthologist head for Earth. With their plan in place, who is there to save the rest of the human race?

My main gripe for “Iron Sky” is the fact that it is weighed down so heavily in the political satire that it almost forgets how much fun the rest of the story is. The film takes constant swings at the American government (which is mostly deserved), though I don’t agree with many of our policies, I’m still an American and some of the harshness was a pinch much. There were a few missed opportunities to go completely crazy with the story but may have been held back a bit.

That doesn’t mean you shouldn’t watch the film. Visually, it has a very distinct design that should have the steampunk set eating this up. The film is perfectly cast though I wish there had been more Udo (I’m greedy!!). Mr. Kirby, who plays the American astronaut was terrific. A brave performance and the things his character has to go through are terrible and funny. The music in the film is great, after watching the film I bought it right away from iTunes. The entire film was scored by Slovenian industrial-metal-avant-garde group Laibach (I’ve been a fan a long time). 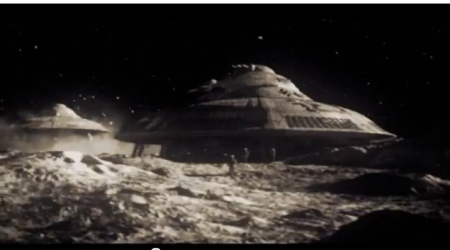 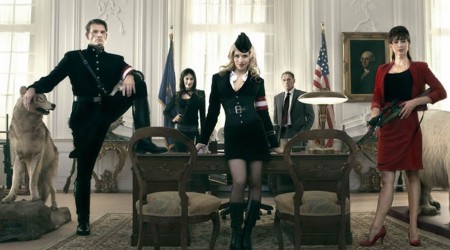 “Iron Sky” is a brilliant idea that hits most of the important marks though at times it gets muddled down and sometimes tries too hard to be politically relevant. It doesn’t ruin the movie though, there is much to enjoy and the overall look of “Iron Sky” is something to really enjoy. From what I have read, much of the film was fan-funded so that is just another added reason why this is worth a look. I still have no clue when it will be released in the U.S., when it does, have some fun with it. **** (out of 5) 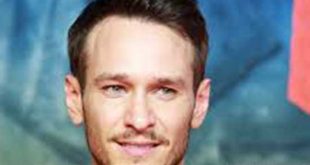