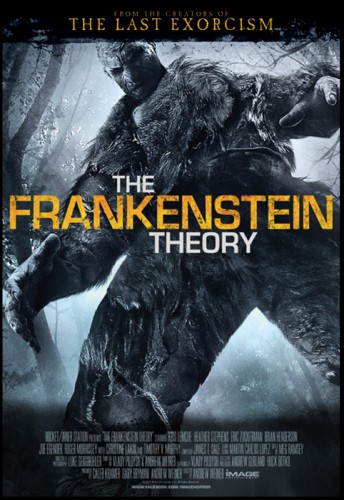 A young, brilliant scientist, Professor John Venkenheim, hires a film crew to document his journey into the Canadian wilderness, deep in the Artic to prove his mad theory, to find evidence of a man-made monster living in the wild for centuries. The theory, that the work of Mary Shelley was based on fact not fiction, that Frankenstein was inspired by the accomplishments of his grandfather’s great grandfather. With years of research behind him, based on the number of missing person cases and unsolved murders in small communities, Venkenheim believes the creature migrates south during the winter, close enough to population, to civilization that he can film an encounter. This is The Frankenstein Theory and this is his adventure into horror.

Writer-Director Andrew Weiner, along with screenwriter Vlady Pildysh, craft a refreshingly original premise for their found-footage film, The Frankenstein Theory. One that regrettably has very little extraordinary ideas to elevate above an oddly curious 87 minute modern day version of Leonard Nimoy’s In Search Of series from the 70’s. What could have been a minor masterpiece of originality and cinema-verite horror ends up being a under-cooked variation of Bigfoot or Yeti, think Legend of Boggy Creek in the frozen tundra, instead of a meaningful what if the Frankenstein Monster really existed. To its credit, the film makers strive for authenticity, a real life presentation on the theory of a large, hungry, man-made monster roaming in the remote wilderness. It plays more to the Blair Witch Project execution than to the Paranormal Activity or Cloverfield style wow-factor. Unfortunately this undermines the effect of the creature, his existence and his presence; it could easily be just a hungry bear, or a homicidal local madman. The only thing out there to convince you that it is actually the Frankenstein Monster is Professor John Venkenheim played by Kris Lemche, even after they come face-to-face with the creature. The film does have ample amounts of other impressive qualities that help the viewer remain invested in the film: the direction is sure handed and focused, the acting is top-notch and convincing, the cinematography is well done taking advantage of the wilderness, the night vision and the remote locations. The Frankenstein Theory is a terrific idea of a film that needs a little more imagination to its final act to make it stand out among the crowded found-footage horror output. 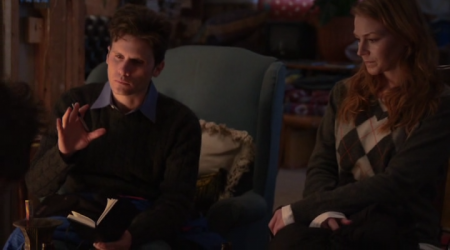 The script for The Frankenstein Theory sets up the film’s events quite effectively and quickly. In the opening scenes, a film crew begins recording the theories and history of its focus, Professor John Venkenheim. Relationships, vocations and conflicts are rapidly introduced. Annie (Christine Lakin) is the interviewer, an attractive and serious film student who also knows the Professor personally. Brian, Eric and Luke are the film crew, with the camera man being the silent one and the sound-man and producer being the obnoxious disbelievers. Together they embark on a journey to the Canadian outback where they meet their brusque and surly guide, Karl (Timothy V. Murphy). Karl escorts them on snow mobiles 70 kilometers off the beaten path to a hunter’s yurt, a small wooden cabin known as Potter’s Gulch. Between the isolation, Karl’s horrifying stories of wild bears and the sounds of a creature imposing enough to scare off a pack of howling wolves, the cast begins debating the presence of the creature. Is it a bear, a local maniac or the Frankenstein Monster. From here the film begins to struggle as it tries to unveil the creature without diving to deep into the fantastical. This makes for a realistic encounter with the beast, but falls short of providing much entertainment or excitement. A little more fantasy, supernatural or anything extraordinary is needed at this point to propel the film into heart racing mode. It’s a respectable choice the film makers make to keep their film grounded, but without more evidence or physicality surrounding the beast, the results are weak and uneventful.

The film is fortunate to have a strong, credible cast. The film crew is the kind you would expect, one believes, one distrusts, one is scared of everything. The sound-man and the producer are a little too immature for their role in a serious documentary, perhaps, but their banter is witty and amusing and keep the film moving and light during the first act and building the second act. Chrisinte Lakin is grounded as the group’s on-screen interviewer with her inquisitive but guarded nature allowing the audience to connect with her the most. Timothy V. Murphy is the film’s best asset as Karl the Canadian wilderness guide. He is gruff and grim; he is the Sam Quint from Jaws of The Frankenstein Theory. So much so, he is even afforded an extended monologue similar to Robert Shaw’s famous Indianapolis speech. In this film, Karl shares the story of a downed aircraft who’s survivors encounter a hungry, angry polar bear. Murphy does a terrific job with this opportunity to illustrate, not only the dangers of the surroundings, but his own experience, tenacity and valor. A testament to his performance is that, once his character completes his arc, the remaining film sorely misses his presence. Kris Lemche is an interesting choice for Professor John Venkenheim as a very young, intelligent and determined character. The youth of the actor, while adequately explained in during Venkenheim’s introduction, is oddly fitting for a character that screams for someone more aged, experienced and authoritative. To it’s advantage, the decision to make the character more youthful allows for his actions be more careless. 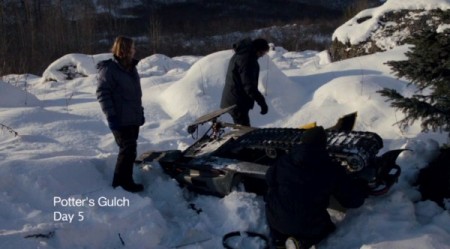 Being a found footage film, The Frankenstein Theory brings with it some of the contrivance and stereotypes of the sub genre that hurt the film as much as it helps it. Most of the roles in the film are the film crew and that set of characters are becoming tired and trite. This is part of the reason why Karl quickly becomes the most interesting character of the film. What Andrew Weiner takes the most advantage of is the scenery, the snowy, isolated locations. The surrounding woods are intimidating, hiding secrets and danger. The hunter’s yurk is desolate and unaccommodating. The cold and weather itself is as dangerous as the wolves, bears or monsters in the wild. The found footage nature of the film captures that fairly well. It also means that most of the scares early on are almost entirely audible, the soundtrack for the film is paramount in establishing the danger, fear and horror. It does a good job of it but never takes that extra step to being that fear home resulting in the group coming off a bunch of whining ninnies. Thankfully, the film never relies on overused tricks such a night vision and shaky cam; it uses them, but only when necessary. Found footage is the film’s strength in many ways, but it still fails to make the most of it at the same time. 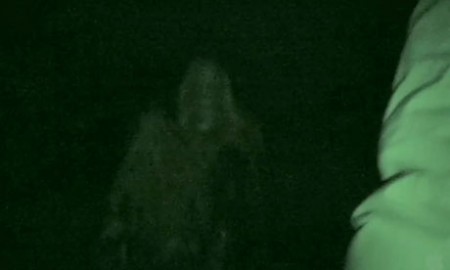 The main interests in watching The Frankenstein Theory is the creature itself, the possibility of the Frankenstein monster in modern times, still roaming the countryside causing chaos and mayhem. The film goes out of its way in efforts to keep the events “real” to dilute the possibility of such a beast. It has trouble committing to it, giving too many options with bears, madmen and such. On top of that, Venkenheim is not convincing enough to sell the creature’s existence all on his own. By the time, the conclusion arrives, having the beast be a bear or a more realistic alternative is almost preferable or more entertaining. Very little evidence of the creature is provided, barely a footprint, no pieces of clothing or housing are unearthed leaving only the growls to provide clues to its existence. Any and all background to the creature, its habits, its nature, its disposition, is left entirely up to Venenheim’s exposition, maps and historical evidence. To be fair, the final act is exhilarating and much of the encounters with the beast are smartly executed based on the approach the film has taken towards its antagonist. The final scene is chilling and frightening, but somehow leaves the audience unrewarded. 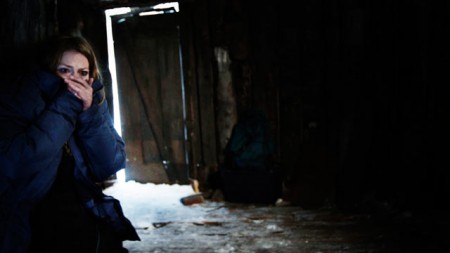 The Frankenstein Theory is missed opportunity, it’s a brilliant set up that spins out of focus by its own decisions. The film is well directed by Andrew Weiner with a solid hand that is both weary of the confines of found footage and is capable of taking advantage of the sub-genre. The cast is more than adequate where even the obnoxious role is due to the character not the actor which is more difficult than is seems. Timothy V. Murphy stands out as a foul-mouthed Canadian wilderness guide giving the other characters a little something more to fear than the weather and wolves outside. The idea of the Frankenstein Monster living in the wild in modern times is a intriguing and exciting idea that the film never fully capitalizes upon even during its conclusion. It is a victim of expectation on its own premise. What is provides for that expectation does not necessarily meet audience expectation of what that core setup should deliver, the monster itself. To be fair, the film’s title is The Frankenstein Theory not The Frankenstein Monster, but the monster is what the title and the film’s search infers and entices; and, to that, the film falls just a tad too short.

The Frankenstein Theory (2013) is now available from Image Entertainment