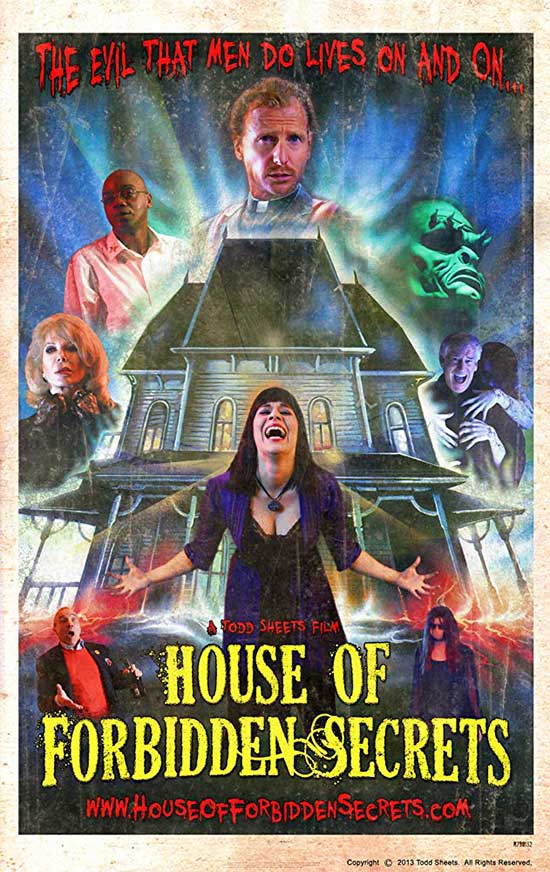 Jacob Hunt has had some very bad breaks in life. His wife left him, his friends have all abandoned him, and his children barely see him! Jacob has been given an amazing gift and the chance he needs to get back on his feet and start anew. Jacob has landed the job of overnight security officer at the old ShadowView Manor. It has now been turned into a commercial office and retail building. Jacob is about to learn nights around the old Manor contains many secrets. A dark past that is breaking through the boundaries of time, leaking into this dimension. As luck would have it, Jacob’s first night on the job is the anniversary of a dark tragedy that has stained the building.

House of Forbidden Secrets is a supernatural horror film by writer/director Todd Sheets. While it has just been released on Blu-ray and DVD by Unearthed Films, it is hardly Sheets’ newest film. In fact, it premiered on the festival circuit back in October, 2013, and the filmmaker has finished a number of projects since: Ouija Death Trap (2014), Bonehill Road (2017), as well as the Unearthed Films-distributed Dreaming Purple Neon (2016), not to mention a number of shorts included on a variety of anthologies. Nevertheless, House of Forbidden Secrets does mark the beginning of the second phase of Sheets’ film career, as well as his triumphant return after a lengthy health-related hiatus, and when all is said and done, it might just be one of his best movies yet. 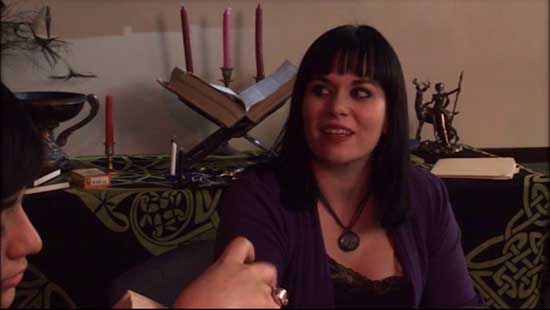 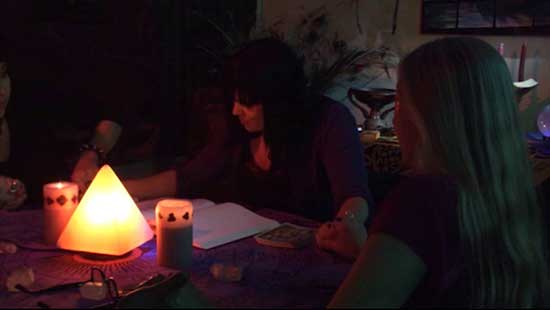 Jacob Hunt (Antwoine Steele, longtime Todd Sheets film regular; Dead Things, Dreaming Purple Neon, Clownado) has just started a new gig as an overnight security guard, and this is where our story begins. While getting the tour of the building by the resident maintenance man, Jackson Kincaide (Bryan David), the pair gets roped into helping with a séance by Hannah (Michaela Paxton Tarbell; Kiki Meets the Vampires) and Cassie (Nicole Santorella; Hi-8) of Tarot Times, one of the businesses that calls the building home. Coincidentally, Jacob’s first night is also when local Channel 5 news has sent a team (cameraman Wayne Harris, played by Brad Westmar, and reporter Tamera Davis, played by the lovely Millie Milan [Bonehill Road, Dreaming Purple Neon]) to cover the Tarot Times séance. What all this means, in the big picture, is that there are plenty more victims when Cassie’s séance, meant to connect with Dorothy’s (Iris Runyon) dearly departed husband, goes wrong and opens a door to a realm of ghosts and demons that haunt the building. 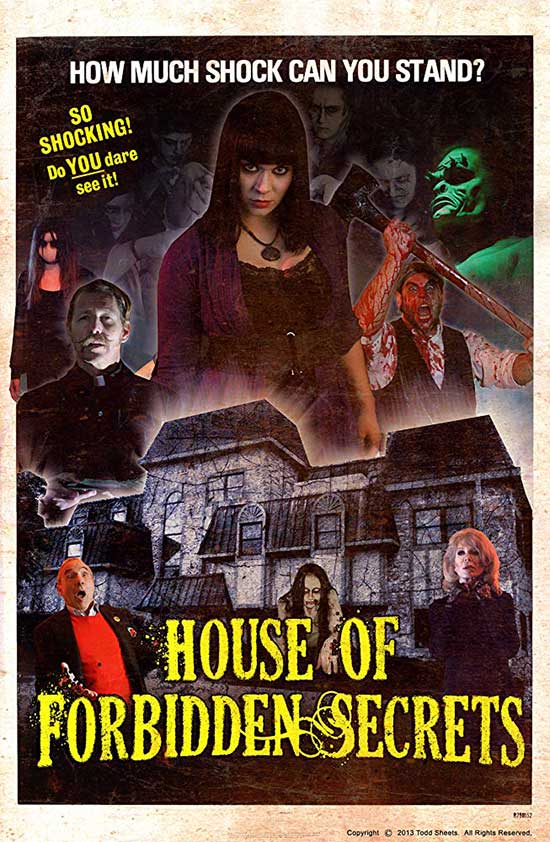 While House of Forbidden Secrets opens in medias res with a quick glimpse of the violent middle of the story before going back to the beginning, most of the first 20 minutes or so are dedicated to introducing the audience to the characters and the building in which the violence takes place. But once strange things begin to happen, and Cassie begins speaking in tongues, and the first face is ripped off, it’s pretty much non-stop action and bloodshed. Sheets takes an Italian-style approach in his horror storytelling. There are often vivid blues and reds on screen, a nod to the Argento/Suspiria lighting. There are many Fulci-like elements as well, from the broken wall and flooding of the basement to the various undead roaming the building. Fans of Italian horror films will also no doubt recognize much of the music as that of Fabio Frizzi, composer for many of Fulci’s films, including Zombie and City of the Living Dead, as well as Pieces and Puppet Master: The Littlest Reich, among others. Sheets also added music by Toshiyuki Hiraoka, composer for many of the Sleaze Box films (the Death-Scort Service series, Chaos A.D., etc) among others. 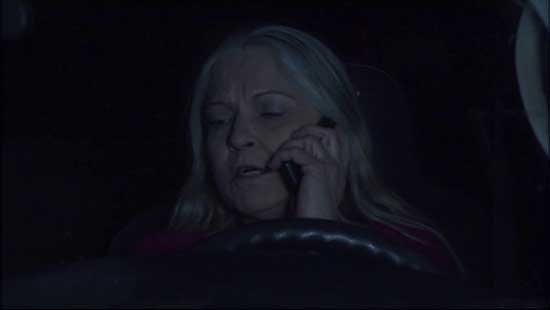 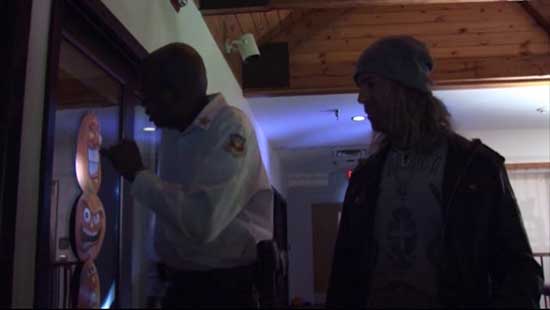 In addition to all of the work put in off screen to make what’s on screen look and sound its very best, Sheets also brought in a number of cameos that will make the die-hard horror fans smile. There’s Ari Lehman, the original Jason Voorhees from Friday the 13th, as a building crewman (his role is brief, but listen carefully for a great line of dialogue), George Hardy (Michael Waits from Troll 2) as Jacob’s boss, Mr. Cane, Allan Kayser (Brad from Night of the Creeps/Bubba from Mama’s Family) as Brad, the resident tech guy, and Jill Sixx Gevargizian (an up-and-coming director to watch, see Call Girl and The Stylist) in her first acting role as a “killer siren”…and those are the smaller roles. The “big bad” of House of Forbidden Secrets is Elias Solomon (the underrated Lew Temple; The Endless, The Walking Dead, and Adam Banjo from The Devil’s Rejects), a reverend from back when the office building was a house of prostitution, who has found his way to the present to continue his reign of terror. Speaking of the past, a section of the movie is dedicated to a flashback to the old days, showing us what happened that has cursed this building. It’s in this flashback that we get to meet the madam of the house, Greta (the legendary Dyanne Thorne; Ilsa, She Wolf of the SS), and her man, Klaus (Dyanne Thorne’s real-life man, Howard Maurer, from 3 of the 4 Ilsa films). And, of course, no one could miss Lloyd Kaufman (head honcho of Troma) going overboard as Cassie’s father. While all of these (aside from Temple) are minor characters, they add a little something special to the story, providing the hardcore horror audience with a little “Hey, I know him/her” happiness. 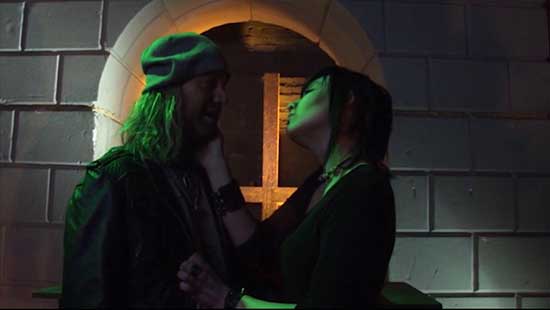 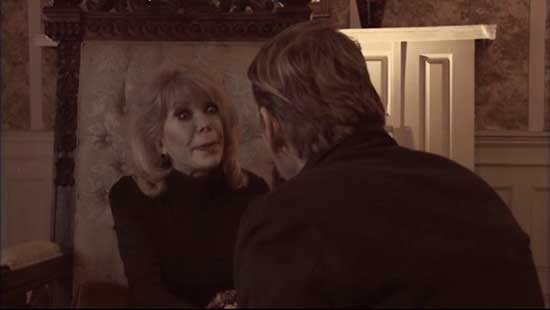 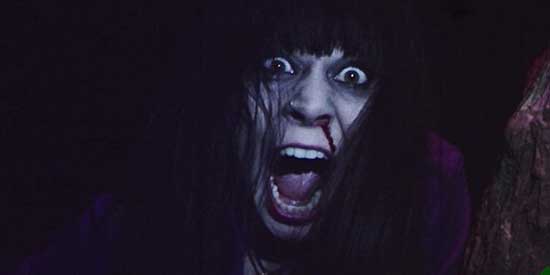 Todd Sheets is a literal legend in the shot on video horror world. Since 1985, he’s released just short of 50 movies, most of them full-length features, and that’s including a twelve-year period from 2001 to 2012 where he only released one movie. It could easily be argued that he is only getting better with age: Dreaming Purple Neon and Bonehill Road feel monumentally different from movies like Sorority Babes in the Dance-A-Thon of Death and Zombie Rampage. House of Forbidden Secrets ranks among Sheets’ best, and might be the best. The plot is interesting and engaging, the gore is on point and the scares work, and most importantly, the story succeeds. This is a low budget movie, so of course everything isn’t perfect – the actors won’t be winning Golden Globe awards, and the effects and settings are the best available for the money on hand. But this is a damn entertaining movie, with hints of the Italian horror films of yesterday alongside a fresh story and interesting, original characters. If you like the work of Todd Sheets, you’ll love House of Forbidden Secrets; if you’re not familiar, this might just be the perfect entry point to his catalog. Highly recommended.