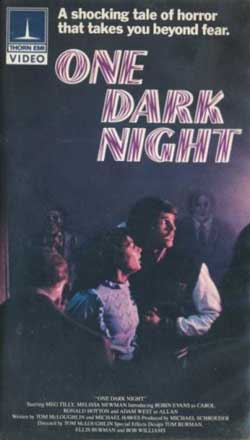 As part of an initiation into a club called the Sisters, a young girl must spend the night in a mausoleum.

At a quick glance, One Dark Night might be mistakenly lumped in with Phantasm (1979) as more evil funeral home fun. Given its general premise, it could also be assumed that this is another low budget slasher knock-off. Again, that would be a mistake. One Dark Night is truly one of those movies that is a category of its own, but I’ll get to that later. As the film begins, six women have been murdered while their killer, dead of a heart attack, even after death seems to possess eerie powers (sparks shoot out of his hands, that’s how we know). It turns out the murderer was a famed Russian psychic, interred in the mausoleum complex where most of the film will take place, his daughter Olivia and her husband (Adam West of TV’s Batman) are one of the few mourners on hand to pay respects to the dead man. Meanwhile, an obnoxious “club” of three (3) satin-jacket-wearing teenaged popular girls plot the initiation/humiliation of their wholesome new pledge Julie (played by Meg Tilly, later of The Big Chill and Psycho II, both from 1983). Because their mean girl leader Carol used to date Julie’s current boyfriend Steve, this guarantees an especially sadistic night that Julie has ahead of her and that’s before the dead bodies start getting up and walking around. 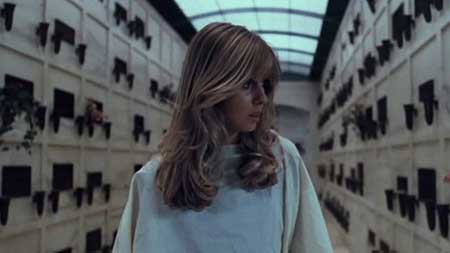 Up to this point in the set-up, One Dark Night seems pretty standard fare and we pretty much know who’s going to get knocked off and who’s not. Director Tom McLoughlin (Friday the 13th Part VI: Jason Lives and the underappreciated Sometimes They Come Back) features enough offbeat touches to transform the standard premise into a unique 80s horror movie that every horror fan should see at least once. Instead of just letting the dead serial killer  psychic just get up and start killing once it gets dark, One Dark Night invokes telekinesis and gives its big bad the power to move things with his mind, even from beyond (just like Steven Spielberg).

A psychic vampire, this man feeds on the fear and energy of others to increase his own powers (necessitating his murder of the six women at the beginning of the movie). We get him put away in the mausoleum, his coffin slid into the wall, and then along comes Julie and “The Sisters,” as the girls like to call themselves (they wear purple satin jackets and they feel too much like a low-rent version of the Pink Ladies from Grease, but I’ll go with it). Julie is locked into the mausoleum overnight and tries to remain brave as the sun goes down. 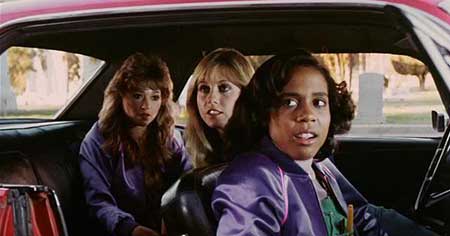 That’s when Carol (Robin Evans) and her fellow member Kitty (Leslie Speights) break into the mausoleum and start playing spooky tricks, all of which serves to disturb and embolden the dead psychic in his tomb, our Final Girl type pops a Demerol, and it’s all downhill among the dead from there. It seems that our dead psychic can use his powers to reanimate the dead and after all, they are in a mausoleum filled with coffins hosting rotting corpses, leading into a daffily gruesome final act. Will the dead psychic’s daughter figure out what’s going on and save the kids? Will the lunkhead boyfriend (who wears a letterman’s jacket and rides a motorcycle, talk about laying it on thick) find his Demerol-addled girlfriend in time? 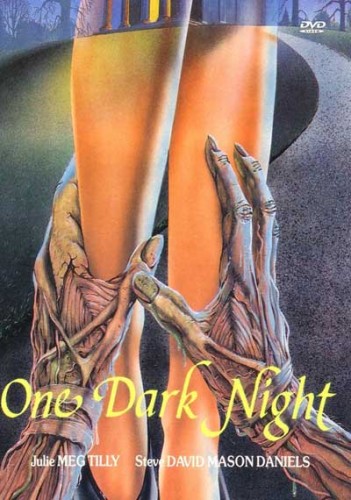 One Dark Night is, at times, a pretty weird movie with director McLoughlin’s offbeat choices and sense of humor relying on the same brand of wacko charm that powered the director’s Friday the 13th Part VI: Jason Lives (1986). Atmosphere and setting also play a tremendous role in why the film “works” even thirty years later. Prefiguring atmosphere-heavy films like The House of the Devil (2009), One Dark Night is full of lingering shots on the vaults within the mausoleum and the notes, cards, and flowers left behind by grieving loved ones. Steadicam shots are used to maximum effectiveness as the camera glides through the silent halls of the mausoleum, forever suggesting the lurking menace and delivering in spades in the memorable gruesome conclusion. 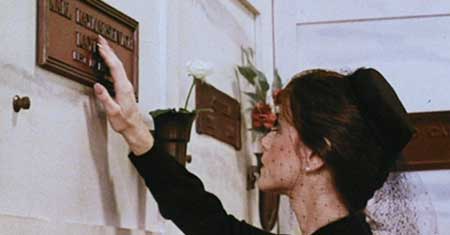 As a result, the film’s setting has a personality of its own and it helps elevate what might have other been a muffled misfire by a first-time movie director. McLoughlin uses trappings of supernatural horror and gothic, but the telekinesis angle, the aforementioned wacko charm, and enjoyable performances by its young cast. This is especially true of Elizabeth Daily, playing reluctant bad girl Leslie who ditches the group, refusing to be part of the grim prank, and sadly disappears from the movie; she went on to star in Pee Wee’s Big Adventure and to voice the titular pig in Babe. 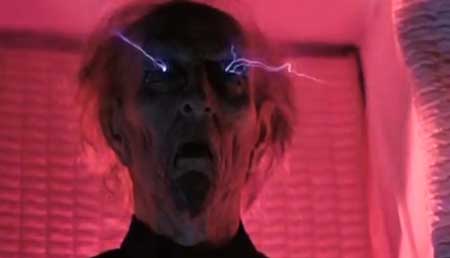 Perhaps my only real gripe with One Dark Night is that, until the conclusion, there seem to be at least three subplots going on (the girls planning their prank, lunkhead Steve searching for Meg Tilly, and the dead psychic’s daughter learning of her father’s evil). That means several locations and as a result it can be a little difficult to remain fully engaged in all three, a problem that the recent Insidious: Chapter 2 (2013) also struggled with. It’s a small matter, though, and in no way interferes with my recommendation of One Dark Night, which turned out to be much more suspenseful than I had expected given its somewhat conventional set-up. For a double feature of early 1980s horror, pair it with The House on Sorority Row (1983). 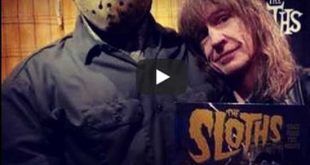