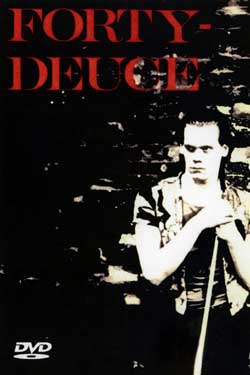 A young hustler tries to get drug money by selling a boy to a middle-aged man; his plans are disrupted when the kid dies.

Forty Deuce, based on the off-off-broadway play by Alan Browne, should probably be put in the U.S. National Film Registry for its historical significance in displaying just how damn filthy 42nd Street was in the early 80’s. Graffiti, P*rn theaters, run down apartments, everything we wish NYC could still be. Directed by Paul Morrissey, Warhol Factory member known for discovering The Velvet Underground and making a number of films starring drug addicts and transgendered inexperienced actors, the films holds the gritty grimy atmosphere and unredeemable characters fitting his MO. Most notable is Kevin Bacon stealing the show in this pre-Footloose role. 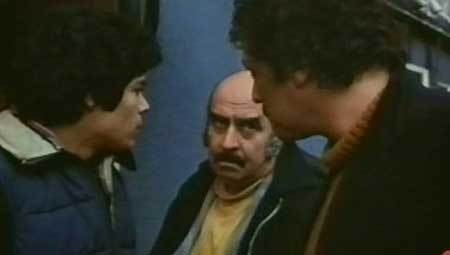 The movie begins with a pimp finding a naked 12 year old boy in his bed. He then storms out of his apartment and chews out a group of junkies that prostituted the young boy out of his apartment the night prior. Later on through further investigation these dope fiend male prostitutes discover that the 12 year old boy has died from a drug overdose. But they already scheduled him for a session later that evening with an old pervert! And they need the money! What should they do!? Yeah you know, that old story.

The knucklehead addicts figure they can still lure the man to the facility and get his money. They will explain that the kid is passed out and once the act is in operation they’ll walk in the room, proclaim the boy is dead and blame it on the customer. They go about with this plan, bringing an older but nicer dressed man with somewhat of an intellect into the room (Dude reminded me of William S. Burroughs). They smoke a joint with the guy and convince him the boy is just passed out. Still, the man appears to have cold feet. What follows is a 15 minutes conversation with hustlers trying to convince the guy to take advantage of the boy using very graphic descriptions meant to turn him on. Never seen anything like it. Wrong. So wrong. 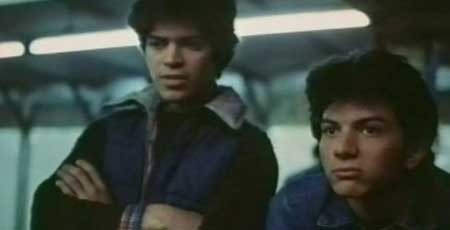 This is a dialogue driven movie which is good in some ways, not in others. New York accents, raging fast chit chatter, and street lingo from 30 years ago makes the dialogue a little hard to process at times. It took me about 20 minutes to get use to the style of conversation. Much respect to the great cast of actors for seamlessly pulling this off. The acting is superb and Kevin Bacon as Ricky really stands out. It’s easy to see why he went on to become such a big star. He is such a sleazy scumbag creep, it’s like the role was written specifically for him. This is an actor’s movie and the cast makes it work and they deserve all the credit.

What prevents this film from becoming a cult classic can also be blamed on the dialogue. Most of the scenes go on for way too long, especially the last 20 minutes that take place in the apartment room with the naked dead kid. Conversations drag on and run in circles with no end in sight long after the purpose has gotten across. The dialogue is enriched with one filthy line after another but usually does it to overkill. The shock value of it ends quickly and it comes close to having me call it the dreaded “P” word that rhymes with contentious. Oh yeah, the “N” word and tons of other bigoted babble is all over this flick as well. The dialogue is nowhere as funny or clever as it wants to be. Much like my reviews. 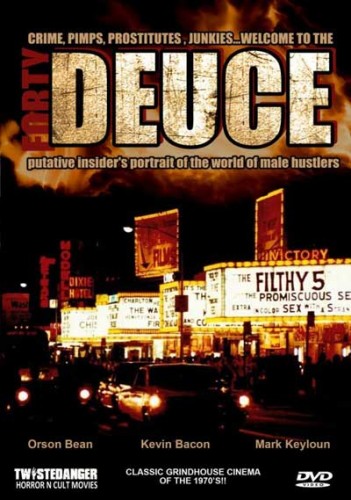 If you’re a fan of Kevin Bacon and insensitive jokes about the sexual abuse of minors, you definitely need to see this film. You will get bored when they ramble on so feel free to nod out like a junkie whenever the feeling falls over you. When the movie ends I suggest you take a shower and keep scrubbing until the skin bleeds.