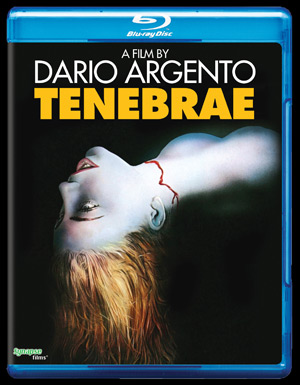 An American writer in Rome is stalked by a serial killer bent on harassing him while killing all people associated with his work on his latest book.

“Tenebrae” is the story of popular mystery author Peter Neal (Anthony Franciosa) who is visiting Rome on a promotional tour for his latest best seller “Tenebrae”. Upon his arrival he is informed that someone was murdered & pages of his novel were found stuffed down her throat. Of course, Neal has an alibi since he was in transit to Rome when the murder occurred but he is told to be careful since his novel seems to have been the catalyst for the murder. Peter is accompanied by his personal assistant, Anne (Daria Nicolodi) who has been in his employ for six years & is basically his right hand (Wo)man. They are met at the airport by his agent, Bullmer (John Saxon) who has a slew of interviews & television appearances set up for Peter to help promote the book, which is already a big hit.

The police have no idea as to who committed the murder & are even more confounded as the murders continue. Peter, being something of an expert on murderers & their motives takes it upon himself to investigate the murders on his own with the help of Gianni (Christian Borromeo), who assists Anne while in Rome. 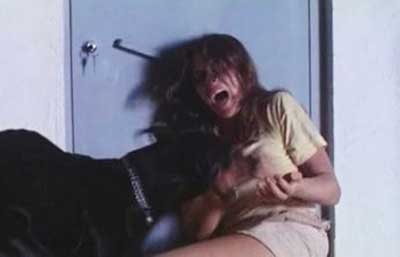 First things first, I found it odd that Dario Argento decided to title this movie “Tenebrae”. The title itself means “Darkness” or “Absence Of Light” and there are few scenes in the film that take place in the dark. Most of the film takes place in brightly lit rooms or in broad daylight. This, in & of itself is a change from the usual “Giallo” films that came out of Italy in the 70’s. This is not a criticism mind you. The film is so much more effective because of the fact that a lot of the murders take place in brightly lit rooms or (In one case) broad daylight in a plaza filled with people.

During the film we get some odd flashbacks of a young lady wearing Red heels on a beach, luring three men to follow her seductively as she slowly reveals one breast to them with the promise of more to come. These Flashback scenes are filmed hazily as if they are part of a dream. In fact they are just that, parts of a dream & since they come at intervals of the film we can’t put together their meaning until the last part of the dream is revealed to us. But the Red pumps are a clue. Cannily, Argento does not reveal who is having these dreams or why, which leads the viewer to wonder what significance they have to the plot.

And Argento’s script is one of his better ones. The mystery behind the murders only deepens as the film continues. There are so many red herrings in this movie that it’s enough to make your head spin. I know mine did more than once. At one point in the film Peter is interviewed by a reporter on TV who seems to have an axe to grind with him. His questions seem to lead to the idea that peter is some kind of pervert who hates women in general. Once the interview is over, Peter admits his befuddlement over the reporter’s questions to his agent. Which leads us to wonder…why is the reporter so insistent on branding Peter a pervert? Is it his opinion or is it something personal? 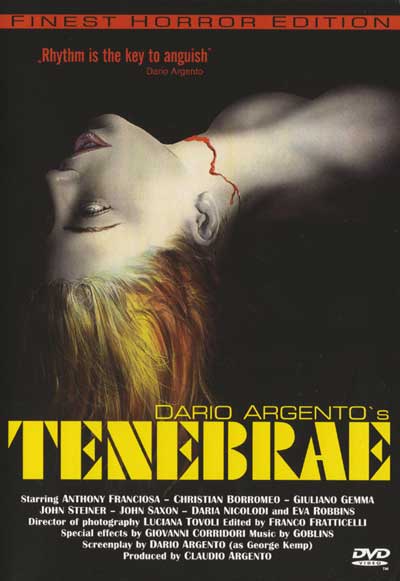 Peter is also followed to Rome by his former lover Jane (Veronica Larrio), who apparently still carries a torch for him & is angry over not being together with him any longer. She cuts up his luggage at the airport in NY before he leaves for Rome actually. He arrives at his hotel to find all of his belongings in his luggage destroyed. Oddly enough, after the initial shock of finding his belongings destroyed he simply shrugs it off & goes about his business as if nothing is wrong. Jane is seen by both Peter & Anne outside of his room on a few occasions but always gets away before she can be caught. Which leads them (& the police) to believe she is the murderer. But is she?

While “Tenebrae” doesn’t have the bright almost garish colors that mark Argento’s work it does have some amazing camerawork. There is a scene where the camera begins on one side of a house & slowly crawls up the wall, over the roof and down the other side in one smooth shot. It’s a thing of beauty to behold & while a bit unnecessary, still shows that Argento watched a lot of Hitchcock/Welles films before he began making his own films. The music by Goblin, is one of the weaker aspects of the film I thought. I didn’t feel the tension that I thought it should have brought to certain scenes, rather i felt like I was listening to some ersatz disco music most of the time. The tension for me came from the camera set-up’s and the insane build up’s to the murders. Some of which are completely out of left field. In fact, each murder eliminated a suspect for me until there were none left. Yet still people are being murdered by someone, but who?

There is a line from one of Sir Arthur Conan Doyle’s “Sherlock Holmes” mysteries that’s used in the film that might help explain who the killer is to those of you who haven’t seen the film yet. “When you have eliminated everything else as impossible, whatever remains, however improbable, must be the truth.” Although I must admit, I was still a little surprised when the final reveal came to light, even though I used that line in trying to figure out who the actual killer was. “Tenebrae” is one of Argento’s finest achievements, perhaps his best after “Suspiria” in my opinion. It is a sleek, sexy & most importantly engrossing thriller that will have you guessing throughout it’s running time. All of the murders are superbly bloody & one in particular made me wonder if the film had any influence on Asian filmmakers of this era. I’ll let you figure that one out on your own. Anthony Franciosa excels in the role of Peter.

He has the air of what I would imagine a popular author would have about him. He’s also very believable when he decides to investigate the murders on his own. It’s sort of like a “Murder She Wrote” episode he’s acting in. For those of you who may not know what I’m referring to, “Murder She Wrote” was a popular television series in which Angela Lansbury played a retired mystery author who solved real life mysteries. Never once did I not believe in Franciosa’s performance as the author, a great performance. John Saxon also deserves credit for playing his agent as a bit of a hustler.

He doesn’t look the part but he plays it well. I did have a bit of an issue with the way some of the female roles were written though. I can’t blame the actresses too much as they were just reciting Argento’s script but some of the time I just had to wonder “Why would she do that?” in certain situations that ended up with a woman being murdered horribly. One bravura sequence that features a young girl & a very athletic Doberman is very exciting & excellently played out is ultimately crushed by coincidences that just made no sense to me. That plus the fact that the girl could not only scale more than one fence like an Olympic athlete but she could also outrun a very fast dog, all to no avail in the end. It’s an exciting sequence to be ure but it rang false to me and seemed to be put there as a plot contrivance to move things along.

But overall, “Tenebrae” is a fine example of what a good “Giallo” should be. It’s exciting, bloody, intriguing & mysterious all at the same time. And it looks great as well. In the end The Black Saint give it 3 1/2 shrouds. I might have scored it a bit higher if I enjoyed the music a bit more or wasn’t bothered by some of the plot contrivances. But it’s still a fine film & should be seen by any lover of a good murder mystery.

Tenebrae is now available on bluray per Synapse Films