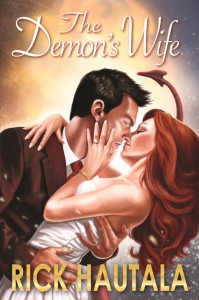 When Claire McMullen has succumbed to the mediocre misgivings in life her defenses ultimately come down. Despising her job, putting up with a questionable roommate and realizing Mr. Right may be just romantic dream, she embarks upon the bar scene with her friend Sally. A mysterious stranger named Samael enters the fray and Claire’s world is suddenly turned upside down. While it seems they bring out the best in one another, something is dreadfully amiss her gentleman suitor. Could their union be a match made in heaven or will their world become hell on earth as they know it?

On March 21 of this year, the literary world bid farewell to a brilliant wordsmith in Rick Hautala after a fatal heart attack. His majestic imagination and creative prowess will live on for generations of readers and fans to admire. With over twenty novels since his emergence in 1980, Rick leaves behind a legacy of adventure and enchantment for our endless enjoyment. It’s no surprise this author was granted the 2011 Bram Stoker lifetime achievement award.

For reader’s unfamiliar with Rick’s endeavors; what better selection to begin with than The Demon’s Wife? The plot premise is refreshing, instantly engaging and a most welcome change of pace from the saturation of genre titles simmering in vampire, zombie and serial killer overtones. Society will always be enthralled with the mystique of the afterlife and damnation. This author seemed to recognize the psychological ramifications and capitalized on this plot in spades.

The premise, as peeled back in layers is thought provoking in its own right. Be forewarned, there are some scenes are shocking and may unsettle some. Some most memorable interaction takes place between Claire and Samael and how the demon expresses intimacy.

The interpersonal relationship between the couple is highly amusing and satirical at times. It’s comical how Claire knit picks, nags and belittles her demon counter-part. Samael back pedals and utters a foray of excuses making their dialogue infectious from syllable one.

Hautala’s voice and style is fluent, indicative of a seasoned author. I can safely speak for other readers of his work in that his story telling prowess is not merely absorbed or digested as it is slipped on, like a comfortable glove prior to a euphoric journey. Most new readers of his work will have difficulty putting it down.

There are some character flaws in Claire which poses some initial difficulty in investing in her character. Her obsessive chuckling is reminiscent of a halfwit or a woman on the verge of hysteria. Then again her reactions may very well emphasize how a regular, ordinary, everyday person may react within the company of a demon. I’ll let you be the judge.

The descriptions particularly depicting the disciples of damnation are hauntingly vivid. Each preys upon the psyche and will invade your subconscious rationality. In several instances Hautala sets up the scene to accentuate the true terror for the reader to be exemplified in what is not in the surface. When a story teller achieves the ability to tap into the darkest regions of our minds, bloody good horror is created and sadly is more of a rarity than one may suspect.

Perhaps what’s most endearing is the romance between Samael and Claire. The Demon’s Wife can just as easily be described as a love story as a horror or supernatural fiction.

I look forward to investing further into reading the works of Rick Hautala. His efforts have captured an odyssey of boundless imagination and ultimately appeals to the unrequited romantic from within.