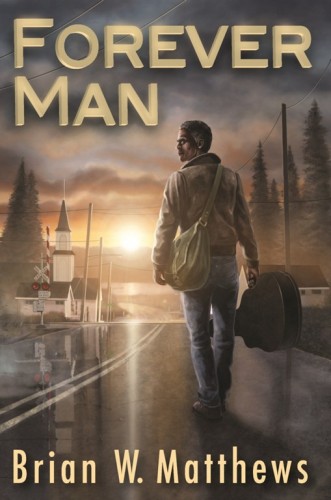 The quaint town of Kinsey, Michigan has been overthrown to chaos as a young boy is found mutilated in the local woods after a high school dance. His date remains missing. After Police Chief Izzy Morris has been dispatched to the scene she realizes the very real terror no parent should have to face. The missing girl is her very own seventeen year old daughter Natalie. While Chief Morris races against time and the odds to find uncover her missing daughter, another mystery presents itself in the form of a drifter’s arrival Bartholomew Owens. When a second stranger arrives in the midst things begin to get very bizarre in a hurry with further missing persons. Could the town’s banker Jack Sallinen and his autistic son be the very key to unlocking the door to Natalie’s safety?

Forever Man is a highly imaginative, original tale of suspense, and the supernatural. I highly enjoyed the central conflict of the paranormal versus ESP. Author Matthews composes a most gripping, multi-layered tale capable of transcending unto a universal audience regardless of the era.

There are numerous characters, especially within a two hundred ninety some odd paged novel. The author creates interesting, engaging protagonists and antagonists; no easy feat considering the parameters and restrictions surrounding the novel’s length.

The average reader can identify from the get go the dysfunctional relationships within the central characters. Instantly we identify with their plight and can easily empathize with each of their circumstances. These aren’t perfect, cookie cutter characters and we as the audience appreciate their follies and faults every bit as much as their attributes. They seem more human, more realistic somehow. We want to get to know them and find ourselves cheering them on throughout their quest for good to prevail against evil.

Most notably is how refreshing it is to see an African American as the lead character in Bart Owens. I need not remind even the most novice of horror fanatics that the lead characters are almost always painfully and stereotypically white, Anglo-Saxon men and women. Far too often whenever an African American is cast within our chosen genre he or she ultimately faces their inevitable demise within the first few pages or minutes within cinematic grandiose. Author Matthews takes a bold leap into breaking the norm and I highly commend his efforts for thinking outside of the box.

Without divulging too deep into the abyss of plot spoilers I will say that the special gift contained within lead character Owens is worth the price of admission into this tale. Matthews innuendos and elusiveness in plot development along with rising tension opens the reader’s imagination ultimately leading us down a path of plausibility and rationality. Just when we least expect it, a detour is thrown via plot twist, keeping us guessing until the very end.

Some of the interactions between Owens and Chief Morris are perhaps questionable and likely would not exist in ‘real life’ police protocol. This may frustrate some readers, but then again this is fiction and let’s try to remember that things will not always transpire as expected. I admire Matthews venturing from the mundane and predictable. After all isn’t it a little chaos and calamity we all look forward to in a good, fun supernatural tale?

The final act presents somewhat of a potential segue into a sequel, which this critic would highly anticipate. I found a great deal of mystique and intrigue surrounding the evil tendencies and presence. Perhaps in this case the questions spawned as a result of the supernatural activity will resonate long after the reader’s final page is digested. If any author succeeds in provoking the golden question, ‘what-if’ on any level, then I would suggest that is an author well worth following.

-A tremendous read for fans of the strange, unexplained or paranormal