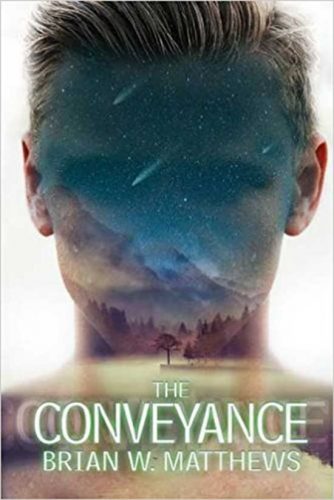 The sleepy hollow of Emersville is not quite as serene and uneventful to the unsuspecting eye. Dr. Brad Jordan, a psychologist struggles to help determine the mental malady of a childhood patient named Doug. As the psychological layers are peeled back one mystifying circumstance is unfolded after the next. Could Doug hold the very key to solving an ancient mystery hidden from the rest of the world? Or could a device in which he’s become attached to be the very talisman responsible for the destruction of earth as civilization knows it?

I’m not proud of the fact of just how long I have been sitting on this review. A signed paperback was issued to me at the beginning of this year from the author as a birthday gift. I have created a genuine disservice by failure to submit and I hope I’m not excluded from the future birthday list. To read The Conveyance can be best described as living vicariously in virtuoso escape. Awaiting my own pivotal moment in life, I took great semblance in devouring each word, paragraph and page. A most welcome distraction, The Conveyance created a fantasy backdrop within the cerebral cortex that could be matched to no other.

It has been an honor and thrill to witness Matthews continue to flourish and flex his diversity from his other previous novels The Forever Man and its sequel. It is a thrill and sincere pleasure to consider him colleague and friend. I wish this highly gifted author nothing but continued success.

Matthews prose is down to earth and approachable. The story’s pace carries much like an old friend conveying an anecdote. His way with words is infectious and he embraces his audience in compelling fashion.

Realistic, believable characters are drafted enhancing a plausibility factor. Dr. Jordan’s wife and her darkened past along with Doug’s mother are each prime examples of the inhuman, human condition. Their follies breathe a breath of fresh air into the tale making us as the audience empathize much more readily. The townspeople are captured in most eerie fashion. This is exactly the stuff nightmares are spawned from.

One of the carnal rules of writing states, write about what you know. Matthews being a psychologist himself once again reinforces the believability elements within the story. Each of the components surrounding mental health and therapy are accentuated flawlessly and with ease. We never second guess the authenticity of the tale making this even spookier than one can imagine.

Embracing a theme of aliens is fresh and innovative. Coupled with the conspiracy variables it is refreshing to see a plot take a detour from the usual in today’s releases. To lift an obvious outer space reference, Matthews boldly goes where few have gone before. Alright, I’m paraphrasing.

The conspiracy and cover up themes will no question beckon a vast audience of paranoia or conspiracy theorists. Upon further exploration the readership ponders the what if question over and over. The obvious subtext in rising conflict correlates all the meanwhile with man vs. himself, his own worst enemy and psychologically speaking or otherwise there is little argument that this is easily the most horrific subtext imaginable.

From a publishing perspective JournalStone continues to flex an undeniable strength in its stable of authors. Cementing a legacy within the horror realm, it is indicative that this press is here to stay. I would be ecstatic to explore any further endeavors from this gifted author or any other under this press.

Matthews’ releases are timed with expert precision. He keeps his audience high in demand with intrigue awaiting the next novel. Many contemporary writers of today fall into a pitfall of over exposure where this author knows how to play on your last nerve awaiting until you can practically take no more.

Perhaps most noteworthy is the author’s dedication to unleashing unnerving content unapologetically. Rejecting a cookie cutter formula his actions mould a very real life of its own into the fray. Sometimes good does not prevail and there are apocalyptic consequences. Matthews’ refusal to coddle the reader is easily one of the most admirable traits in The Conveyance, a certifiable future classic.