The master of all things werewolf Mr. John Landis is at it again this time coming on board as Executive Producer on a new flick titled BAD VIBES. Interested? Then here are the details.

This one will be coming at us from SPRECTREVISION the new company helmed by Elijah Wood, Daniel Noah and Josh C. Waller and they are filling their production slate with genre fare. BAD VIBES are one of those projects. Directed by Dave Gebroe this one is going to take us all back to the “free love” days of the 60’s.

STYD reports the following synopsis: (The story takes place during the] psychedelic rock scene of the late ‘60’s, where Sunrise Majesty is at the top of the charts with their message of ‘free love’ for all. But after an encounter with a strange groupie, bandleader and mastermind Max Cassidy is left with a gift that can’t be cured with a shot of penicillin. Max has been touched with the curse of the werewolf, transforming him into a dark and brooding nihilist whose new sound is almost as disturbing as his new plan: to hold a huge love-in at the band’s ranch where he and the group will infect all their fans, unless Cynthia, Max’s girlfriend and the last untouched member of the band, can stop them.

Landis commented: “Based on the impressive slate of genre films that Elijah Wood and SpectreVision are producing, I am very excited that Dave Gebroe’s clever and scary Bad Vibes has found the perfect home.” so he’s sounding pretty happy with things. 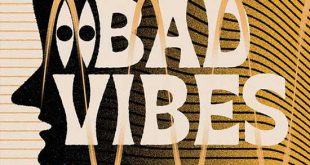