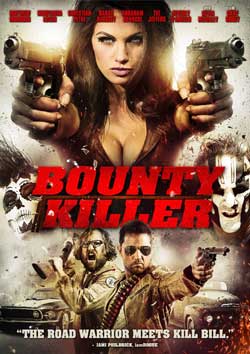 It’s been 20 years since the corporations took over the world’s governments. Their thirst for power and profits led to the corporate wars, a fierce global battle that laid waste to society as we know it. Born from the ash, the Council of Nine rose as a new law and order for this dark age. To avenge the corporations’ reckless destruction, the Council issues death warrants for all white collar criminals. Their hunter’s – the BOUNTY KILLER. From amateur savage to graceful assassin, the BOUNTY KILLER’S now compete for body count, fame and a fat stack of cash. They’re ending the plague of corporate greed by exterminating the self serving CEO and providing the survivors of the apocalypse with retribution.

Directed by Henry Saine and written by Saine, Jason Dodson & Colin Ebeling, “Bounty Killer” was one hell of a surprise for these jaded eyes of mine. In the near future, white collar criminals have essentially destroyed the entire world and the titular Bounty Killers are formed to hunt them down for “Fat stacks of cash” and ending the “Plague of corporate greed” that led to the globe’s ruin. And their are no rules that apply here either, so lots of blood is shed as the hunt continues. It’s a wonky nail to hang it’s hat on but the script is so over the top and the film so manically paced that it leaves you little to no time to stop and think about how plausible any of this actually is. And in the case of this film that’s not necessarily a bad thing… 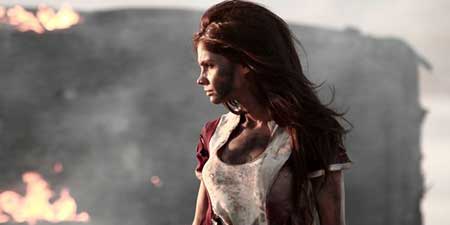 Bounty Killer opens in a strip club (W/holographic strippers) where a couple of dastardly (& nerdy looking) white collar criminals are reveling in their collective glory when they’re waylaid by Drifter (A stoic Matthew Marsden) & the impossibly sexy Mary Death (The stunning Christian Pitre), who emerge from the shadows with pistols blazing! It’s a frenetic & blood soaked opening that immediately sets the tone for the rest of the film. The Bounty Killers are superstars to an adoring public and are treated as conquering heroes whenever they return with their targets, dead or alive (Mostly dead though). Through circumstance it turns out that Drifter is actually a wanted man and Mary is determined to capture him so the rest of the film plays out like an extended chase sequence with a gaggle of cameo scenes from some faces that might surprise you (Beverley D’Angelo, Eve) and some that might not (Gary Busey) but all of them seem to be enjoying themselves and make the film go down a lot easier. But the heart of the film is Barak Hardley as Jack LeMans, who aspires to be nothing more than a gun caddy for Drifter but he really isn’t as good as he claims to be. Hardley gives a really funny & heartfelt performance here and he really endeared himself to me as he clumsily tries to be more than an accessory to Drifter. He’s awkward, goofy, hilarious and I enjoyed him so much I’d love to see a sequel to this film just to see more of his character. 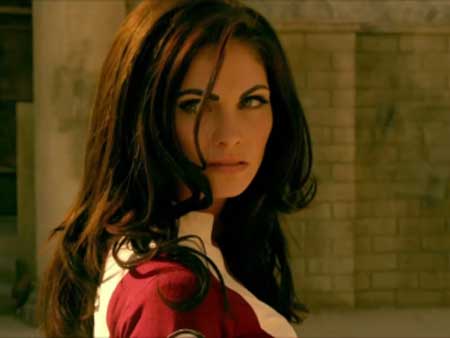 Bounty Killer doesn’t shy away from it’s violent scenes either. Heads are split open & guts are spilled all over the place but it never feels gratuitous, it’s extremely graphic but not in an over the top sense. The film was based on a comic book so a lot of the look of the film is extremely stylized. At times it looks and feels like a no budget Sin City but director Saine is obviously having a ball here and apparently nobody told him that some of the shots he managed to pull off would be impossible on the budget he had to work with. The film looks and sounds great and is edited in such a rapid fire way that a lot of it’s budgetary shortcomings are barely noticeable (But they are there…) 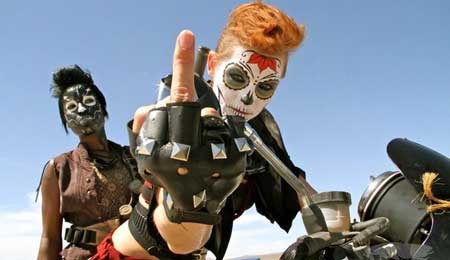 The world that Bounty Killer exists in is a nutty one for sure but it lends itself to some extremely nice visuals and some awesome vistas that make it seem a whole lot bigger than it actually is. There’s an extended chase sequence that takes place in the desert that is an obvious homage to The Road Warrior but still quite unique since the vehicles used in the sequence are so different and the violence on display is way over the top. The badlands sequence is the one sore spot in the film for me because it tried too hard to look like a comic and it comes off as cheesy and poorly executed, but it’s not that big of a deal in the end. 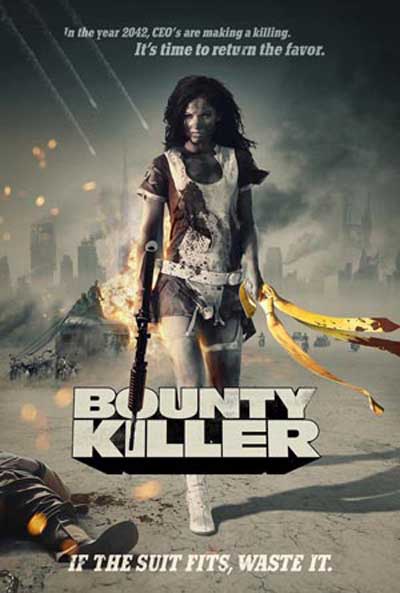 Bounty Killer is a hyper stylized, hyper violent, hyper frenetic action movie that surprised the f*ck outta me! It never stops for a second to let you catch your breath and while it’s script is a bit scattershot and all over the place, it never failed to do anything less than entertain me. Good performances, good visuals and some well choreographed action scenes belie its obviously low budget. It really is a hell of a fun movie and I would love to see more of Drifter, Mary Death & especially Jack LeMans in a sequel! 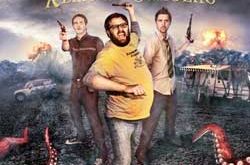