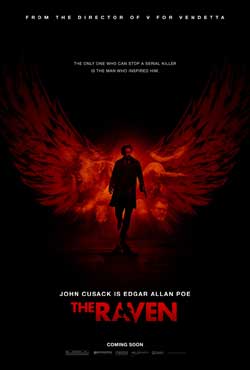 When a madman begins committing horrific murders inspired by Edgar Allan Poe’s works, a young Baltimore detective joins forces with Poe to stop him from making his stories a reality.

I’m no student of Edgar Allen Poe, I admit that fully & without fear of prejudice from anyone reading this review who might take umbrage with some of my opinions. I’ve read “The Raven” and “Annabel Lee” though and I’ve seen all of Roger Corman’s classic film adaptations of Poe’s work like “The Pit And The Pendulum” and “Masque Of The Red Death” (A personal favorite). But although I respect the man and his work, I hardly thought of him as some sort of action hero. Yet in James McTigue’s (V For Vendetta) latest film that is exactly how we’re supposed to envision the man. And while “The Raven” does have some moments of true suspense & a fair amount of grue as well ultimately it fails on a few fronts that just made it feel like more of a well produced cable movie for me. let me explain… 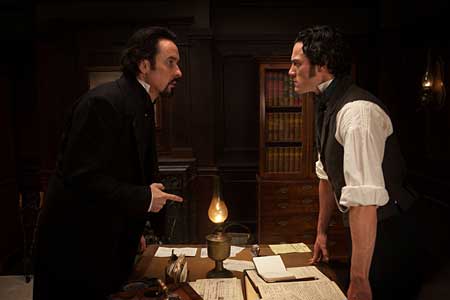 “The Raven” posits that there is a madman on the loose who is murdering people exactly as Poe has murdered them in his published work. Lead detective Fields (Luke Evans) recognizes the similarities and enlists Poe to capture the murderer. The murderer leaves clues at the scene of each murder and who better than Poe to interpret the clues and (Hopefully) figure out the killer’s next move and capture him before he murders someone else? The murders (Those that are featured onscreen anyway) are quite graphic & gory, surprisingly so in fact. But we are actually witness to one in all it’s gruesome glory, the others are shown after the dirty deeds are done but they are still exceedingly gruesome to look at.

Poe (John Cusack) immediately deciphers the first clue he’s given as being related to “The Masque Of The Red Death” and as there is a gala masquerade ball taking place the following night Fields convinces Captain Hamilton (Brendan Gleeson) who is running the event to allow him to put station some of his men amongst the revelers to capture the suspect as it is believed that he must arrive in a costume representing death in one way, shape or form. Well they get a man who bursts into the ball on a horse wearing a skull mask but not only is he not the suspect but as he created a diversion, Hamilton’s lovely daughter Emily (Alice Eve) is abducted & is now being held captive by the villain. The decoy on the horse has a message from him as well, one in which he challenges Poe to figure out where Emily is before she too is murdered. Although Hamilton despises the very sight of Poe (Who was to announce his intent to marry Emily at the ball), he must allow Poe to become part of the investigation since everything the killer bases his crimes are come from Poe’s written work.

“The Raven” starts out slowly, showing us how far Edgar has fallen. He is an extremely opinionated drunk who suffers no fool and has no issues with critiquing other writers of the day whose work he finds inferior. There’s a great scene early in the film in which Poe is gobsmacked when he finds out that a piece he had written for the local newspaper was not used & replaced by a poem from Longfellow (Longfellow? LONGFELLOW?) whom he despises. As Poe, Cusack initially turned me off. His decision to portray Poe as a bug eyed, bellowing drunkard might have been historically accurate but he really chews up the scenery with an energy that reminded me of Nicholas Cage at the height of his, for lack of a better word, “Caginess”. But as the film progresses, he calms down since he has to pour all of that wanton energy into finding the woman that he loves. What started out as a “UH-OH” type of performance for me turned out to be a very nuanced one in which Cusack really displayed his range as one of the better (And criminally, unsung) actors of his generation. 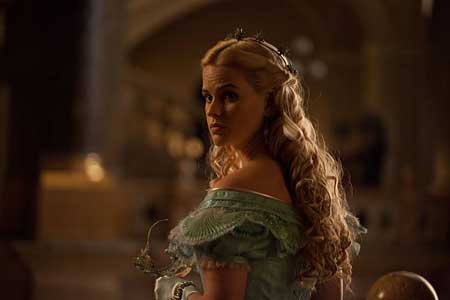 All of the performances in the film are well cast and help to convey the period the film takes place in (Baltimore, 1879). I did find it odd that there were some English accents strewn about among some of the characters while others seemed to sound like they came straight out of a episode of “Jersey Shore”. It was a bit disconcerting for me to say the least but hardly a deal breaker. I also had a problem with the manner in which the crimes were disseminated by Detective Fields. Now I am no expert on police procedurals of the 1800’s but it seemed to me that Fields was a lot more competent than I would’ve thought a detective of that time might be. Sometimes he sounded like he was in an episode of “CSI” circa 1879 and while I (Admittedly) know nothing of how detectives investigated murders back then, something tells me that they weren’t this good. As Fields, Evans brings a bit of panache & determination to the role that was refreshing if a bit too modern sounding. Alice Eve & Brendan Gleeson are suitably convincing as father/daughter also. Ms. Eve has a near porcelain quality to her skin and is also suitably busty enough to wear the dresses of the era and Gleeson is appropriately gruff yet displays his feelings towards both Emily and Poe without leaving any doubt in the audiences mind. 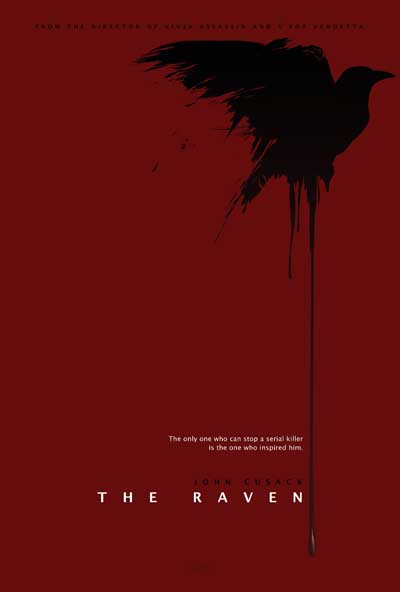 The film looks amazing as well with excellent production design/cinematography throughout. A lot of thought went behind how this movie was going to look and it shows. In a film like this poor design and lighting would kill it before the opening credits have finished rolling but not here. Kudos to Roger Ford (Production design) & Danny Ruhlmann (Cinematography). It was shot in Belgrade and the look & feel of the backdrops are spot on. James McTeigue’s direction shows a strong understanding of the material & despite Cusack’s wild acting in the opening scenes of the film the film never drags and gets stronger as it moves ahead.

So what didn’t I like about “The Raven”? Well for starters, it’s about 20 minutes too long. Listed at 111 minutes in length it felt 30 minutes longer. Ten to fifteen minutes could have been shorn from it’s total running time with no noticeable difference. And the use of a Raven (Or Ravens) in nearly every other scene became extremely heavyhanded and obvious. The audience already knows what the name of the film is, we didn’t need to be reminded every other scene or so. and it’s fairly well known that Poe was something of an odd bird already, the inclusion of a raccoon as Poe’s pet seemed a bit over the top to me. It was a unnecessary quirk that seemed tacked on to make him seem even more peculiar.

There is a scene in which Emily seemingly becomes one extremely tough woman which seemed to be the polar opposite of the character we were introduced to in the beginning of the film. I won’t go into detail but you’ll know what scene I’m talking about when it arrives, I thought it was stupid and contrived. Some of the editing seemed to be scattershot as well. In one scene, we see Poe surrounded by policemen yet in the next scene he’s all alone in a foggy forest being shot at by the killer. And the bullet comes at him as if it was shot from a gun that existed in “The Matrix”, in slow motion with a shiny veneer to it. And does Poe take cover afterwards? Nope..he just sits there waiting for another slow motion slug to be shot at him. And when the killer is revealed, he tells Poe of his next target…Jules Verne! I’d love to know how he was planning to recreate some of Verne’s more elaborate creations, was he planning to build the “Nautilus”? 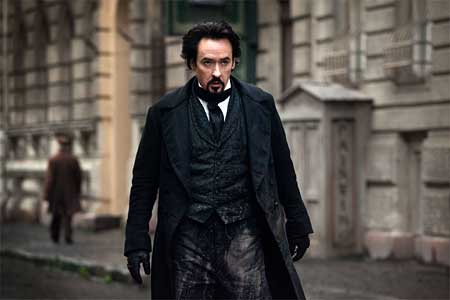 “The Raven” smacks of an attempt to recreate the success of Guy Ritchie’s “Sherlock Holmes” films. The attempt to make Poe some sort of action hero doesn’t fail entirely but it doesn’t quite succeed either. John Cusack’s Poe doesn’t radiate the machismo that Robert Downey Jr’s Holmes does but the role wasn’t written that way so it’s not a killer blow to it’s success. The film ends with Poe sitting on a park bench just as it begins, how & why he ends up there is the meat of the story and it’s a pretty satisfying one but something is missing here. I wish I could put my finger on it but right now all I can say is that while I enjoyed it…It still left me feeling a bit empty when it was all said and done. But it’s hardly a bad film and it is an entertaining one so “The Raven” merits a three out of five on my Shroud-ometer. You don’t have to drop whatever you’re doing to see it on opening weekend but it is worth a watch when you have a couple of hours & $12 bucks to kill. 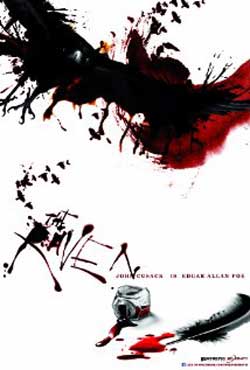