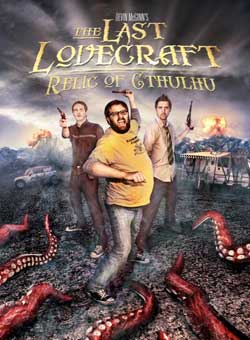 Jeff is an ordinary guy that is stuck at a dead end job with a boring life, but when a strange old man gives him an Ancient relic and tells him that he is the last bloodline of H.P. Lovecraft, He and his friends embark on an mission to protect the relic piece from falling into the hands of those that wish to reunite the relic and release Cthulhu back into the world.

How’s it hanging acolytes? (I mean how are you guys doing you friggin’ pervs). The Black Saint is back with a tasty bit of celluloid to chew on for 90 minutes or so. It’s called “The Last Lovecraft: Relic Of Cthulu” & I’ll be damned if I didn’t have a ball watching this movie because I sure wasn’t expecting to.

The film opens with a quote from H.P. Lovecraft stating that “The world is indeed comic, but the joke is on mankind”. With all of the goings on in Libya & the disaster in China I wonder if Lovecraft knew something we didn’t way back when. But that’s besides the point. The movie then takes us to the Qattara depression in North-Western Egypt where some black hooded men are digging in search of someting very rare, an ancient relic that will help bring the great god Cthulu back to Earth to reign terror on us all. They find it & as they brush some dust off of it it “Bleeds” water & strange rays of light emanate forth from it’s eyes. From here we’re switched off to a yacht floating 60 miles off the western coast, where two buddies are relaxing with some brews & doing some fishing. As one of them goes down to get some beers, the other one gets attacked by something we don’t see & When his bud goes up to investigate whatever got his friend gets him too in one of the films gorier scenes. Up to now I don’t know what’s going on quite frankly but it is pretty cool I have to admit.

We’re then whisked away to Miskatonic University. Where professor Blake is giving a lecture when he is interrupted & asked to leave the classroom. He is led to the bowels of the university where he is told that the “Sister’ relic has been found (The relic that was found in the beginning). He is then told that if it is rejoined to it’s other piece then mankind is in for a “Short & Devastating” war. Apparently Blake is a member of a society that has been protecting the other piece of the relic for centuries. His mission? To find the last of Lovecraft’s bloodline & give him the relic. He is destined to battle the forces of evil to protect the Earth. He balks initially, claiming that he is too old & has no weapons training but eventually relents & agrees to deliver the relic to the last Lovecraft…..

The problem is that the last Lovecraft is kind of a dim bulb who works for the “Sqrly (Their spelling, not mine) Squirrel” gift basket company. His name is Jeff & his best friend is a wise guy named Charlie who works alongside him in adjoining cubicles. Together the two of them daydream of better jobs and sex with their way out of their league co-workers. Charlie is dreaming of creating a comic book but he’s only completed two pages after six months & their prospects for the future look to be dim. Meanwhile, the black hooded cultists that found the relic are reporting to the “Cult Of Cthulu” lair where they are on bended knee to their leader. It is here that we notice that some of them have gills & some of them are out & out fish people. Their leader is known as “The Starspawn” & he sorta looks like the “Red Skull” of Capt. America fame only with two tails. Upon asking the cultists who their leader is, one stand up & replies “I am”. He is promptly given the old “Tail through the head” move & dies instantly. The others are then informed that there is only one leader & that leader is Cthulu. The other piece of the relic must be found to release Cthulu from his underground lair & begin his reign.

Meanwhile, Jeff & Charlie arrive at their home to find Professor Blake waiting for them. After threatening to call the police, Blake asks if they’ve ever heard of Lovecraft. Jeff hasn’t but comic book nerd Charlie has & then tells the tale of how Cthulu arrived on Earth & of his attempt to take it over. This sequence is told through some pretty cool flash animation as Charlie narrates the tale. In Charlie’s version, Cthulu was on the verge of taking over before the great ice age began & trapped Cthulu in his underground lair. But slowly over the years his legend grew & so did his followers. Now all of them are anxiously looking for the other piece of the relic to complete the cycle & bring Cthulu back. Soon the three of them are beset upon by the Starspawn & followers of Cthulu who have traced the relic back to them. As Jeff & Charlie escape, Blake & the Starspawn do battle but it is short & sweet. But Blake buys them enough time to get away regardless. They decide to go to the one person they know who might be able to help them. His name is Paul & he lives in his Grandmother’s basement. He is the ultimate Lovecraft nerd (He even answers the door wearing a Lovecraftian monster headpiece. They show him the relic & he of course doesn’t believe them, as a matter of fact he has the same relic, just one manufactured by a company that specializes in Lovecraft memorabilia. He tosses theirs into his aquarium where it starts to glow with an eerie blue light & he’s convinced as well. He suggests that they go see “Captain Olaf” who has experience with the “Deep Ones”, some of Cthulu’s minions.

From here on in it’s a mad race to protect the relic they have in their possession from the Starspawn & keep Cthulu from returning from his watery tomb to conquer mankind. The film is a pastiche of a couple of different films. “Shaun Of The Dead” & “The Dunwich Horror” are the most evident ones but I also saw some “Trekkies”, “Lesbian Vampire Killers” & even some “Fanboys” influences in here. What’s surprising is that it all comes off pretty well considering the miniscule budget they had. I was especially dubious when I saw that Devin McGinn (Charlie) also wrote & produced the film as well as acted in it. That to me is a big red flag. Especially when it’s a low budget film we’re talking about. Woody Allen can pull that off, Clint Eastwood can pull that off But Devin McGinn? Well, he performs admirably on all counts. He even has a hand in one of the songs playing over the end credits, a true “Jack Of All Trades”.

Some of the humor is extremely heavy handed & some of the effects are pretty cheesy but by & large the jokes & effects are adequate. I laughed out loud at some of the antics going on & the CGI was pretty well done. The makeup effects run the gamut from Cheesy to good but nothing that we haven’t seen before in other films. I especially liked the relationships the three adventurers had throughout the movie. They really seemed to be friends & they embodied their stereotypes in a very convincing fashion. I appreciated the care that the script gave to their relationships. I really cared about all of them and I didn’t expect that from this film at all. All of the performances are convincing because of the well thought out script. It even ends with a most satisfying cliff hanger of an ending (If there is such a thing) that I think Guillermo DelToro would get a big kick out of.

“The Last Lovecraft: Relic Of Cthulu” gets 3 1/2 shrouds out of five from The Black Saint. It’s a funny, exciting & well directed (by Henry Saine) movie that would be an great movie to watch with your buddies over some pizza & some brewski’s. Movies like this are fairly common I suppose but how many of them have Cthulu as the central character with the fate of the world in the balance in them? Can you think of any? Fucking right you can’t!! Go rent this as soon as you can, it’s worth the effort. And with those words, The Black Saint is off to find some more acolytes to build my army with. This Cthulu cat has given me some ideas & I can’t wait to use them….Sleep well my little ones & say your prayers to me. As always, I will be listening…. 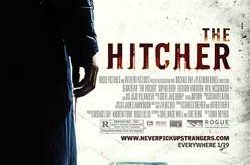 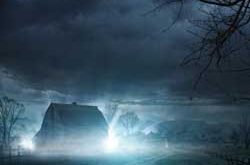