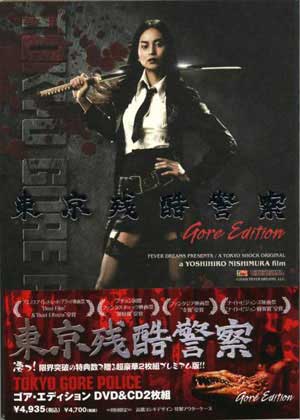 A mad scientist known as Key Man has created a rampaging virus that mutates unsuspecting humans into nightmarish abominations of nature, and in order to dispose of these repulsive monstrosities, the Tokyo police have created a special squad of fearless freak fighters. Chief among these brave officers is Ruka, a sword-swinging dealer of death who has a special knack for dispatching with Key Man’s hideous creations. Despite the fact that they operate on opposite sides of the law, Key Man and Ruka have both dedicated their lives to one common goal: seeking vengeance against the crooked cops who killed both of their fathers many years ago. By which I mean it is chock full of spraying blood and flying penis mutants.

Directed by the bizarrely entertaining Yoshihiro Nishimura also responsible for the film “Tokyo Gore Police”, this film actually begins 63 minutes after. While the film itself is constructed of shorts and only lasts 45 minutes, it still is nothing short of over the top visual pyrokinetics. The first 7 minutes is a recap sort of trailer from the previous film. If you forgot what the “Tokyo gore Police” film was about , this will surely bring you up to speed with the best of collage. Heroes, shooting in the air with bazookas, heads exploding, gut wrenching knife cuts, spatter galore, acid boobs, fists machine guns, a sword wielding gimp, alligator pelvises and a recap on the fight against the ones who call themselves the “engineers”.

These bio organic monstrosities are created from a organic key which does something to the DNA makeup to produce half human half creature warriors that can fire at will or emerge weapons of destruction from their bodies.

Pretty cool eh… Well when I sat down to check out 63 Minutes later, I noticed that the copy I had lacked subtitles. Though in this case these kind of films rely more on visual experiences and so reluctant to move forward I did without being able to understand what was said. I found though once I got into to it, it really didn’t matter. The visual chaos sells itself and delivers with …..subtitles or not. So while I may have lost some of the conversation exchanges it’s still entirely reviewable with it’s presentation aspects. 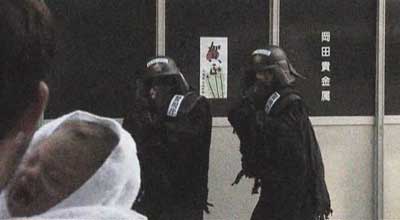 A flash card shows us “short story collection”. The first being Tokyo Gore Dakota. We find a man who seems down on his luck and works hard while his coworkers appear to mock and ignore him most of the time. While I found it repulsive, they also seem to dine on bowlfuls of worms. Go figure!

Approached by an ivy covered naked man with a strange bone from mouth to nose he is awoken . Even the odd looking man seems to be able to find love while this man waits in the bushes. In flashback form the man remembers his tragedies and now sleeps in poverty. 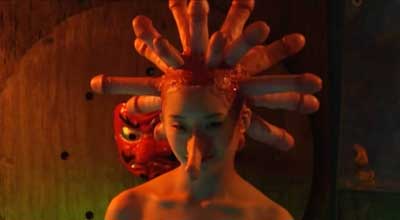 While following a school girl home he is approached by her and receives a kiss. Though the kiss leads to a skull splitting encounter for the purpose of placing an engineer key inside. Like a scene from Godzilla he turns into a pickaxe wielding demon of sorts with extended lips, deformities and the pickaxe fused to his hand. A battle begins between him and his co workers and bloodletting chaos ensues. 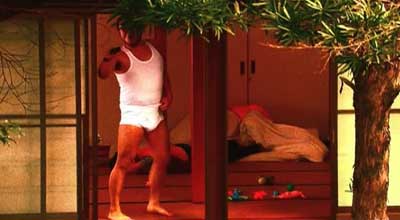 In a way these transformations remind me of Asian versions of Hellraiser Cenobites who are also engineered with these features. Though short and sweet it still is a pretty fantastic little piece. Other segments make fun of the culture with odd little commercials, One boasts using human flesh recycled as lampshades and furniture decor.

My favorite and the most disturbing comes in the way of a young girl who is attacked by a small gang of neighbors when coming down the sidewalk. Instantly it jumps to a rather bizarre ritual that has a group feeding her arms and legs into a grinder and grinding off them off into pencil points. Though in her case bone.

Then as she lays helpless on the ground they mix her grinded flesh parts in a pan with blood , piss in it, and force fee it down her throat….class a stuff..eh? To finish her off they mount pencil tips to each limb and train her to walk. Cut back to the present and she is kicking ass on this gang with her mounted pencil limbs. 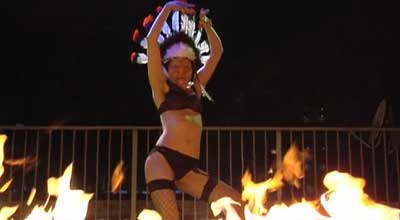 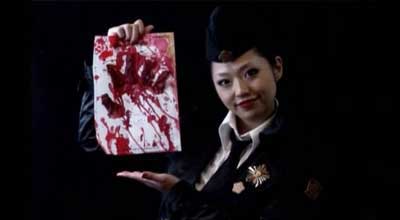 Lastly as we flashback to a scene from TGP, we are approached by a girl with a penis for a nose. As she is challenged by one of the TGP, she reveals a hair full of penises under her cap. They fire, and extend as weapons. Yep an erect extending penis sword. Well the battle continues as she fights against a girl with a male Indian face who lunges axes at her. To retro that attack a torch pops out of her face and retaliates…….. Gosh I love this stuff. So I’m not sure if this piece was an included extra film or an isolated film, but its surely worth checking out.

I’d say it does get any crazier, but that’s only until the next film by these guys. Check it out! – its short but effective!