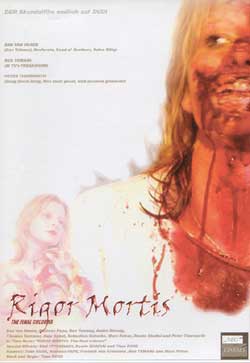 A new computer virus falls into the hands of Norman, a wheelchair bound mentally handicapped man, after a person covered in blood gives it to him. The group of men who are behind the development of the virus want it back, and will do anything to get it back.

Rigor Mortis is not a horror movie about zombies or the otherwise undead, despite what the title may lead you to believe. Rather, it is more a crime story about a powerful computer virus and the lengths that some criminal bosses would go to in order to get their hands on it. It was written and directed by Timo Rose. Yes, the same Timo Rose that gave us that clunker Mutation. But before you dismiss it completely, note that Rigor Mortis was made four years later. And what a world of difference four years can make, especially in this situation. Rather than relying on a story that is too large in scope to tell and filling it with poor CGI, Rose has instead decided to focus on character and fall back on one of his team’s strengths: special effects. What results is a fairly well done, shot on video movie that surprises with its strength via simplicity.

We open with Norman (Sebastian Gutsche), the victim of a car crash which killed his parents and left him disabled, being pushed in his wheelchair along the street by Nadja (Anja Gebel), his brother’s girlfriend. As she steps away to talk on the phone, a bloody mess of a man looking a lot like the hermit from Cabin Fever runs up to Norman and pushes a computer disc into his pocket. As the walk resumes, we see a shady guy lurking in the woods and watching the two. From then on, the movie becomes a group of violent criminals trying to get the disc back, and the lengths they’ll take to do so.

Timo Rose does a couple things in Rigor Mortis. He introduces us to his small group of characters, primarily focusing on Norman and Richie (Andreas Pape), while giving us brief character sketches of the criminals. He builds his characters enough to the point that we care about them, something of a rare commodity in the horror genre, whether independent and large budget. The characters are the strength of this movie. He then has them brutally tortured, really focusing on nastiness through the abilities of his effects crew.

The story itself has Richie searching for his kidnapped brother while the gang of thugs and criminals holding him begins to slowly implode. There is distrust, disagreement as far as tactics and approach, and a general shady element among the “bad guys” who appear along the way, all of whom are in for only two things: the money and themselves. Agreements are betrayed, partnerships are double-crossed, and tempers flare, all resulting in more and more bloodshed. By the end, our criminal element looks completely different from when we started. 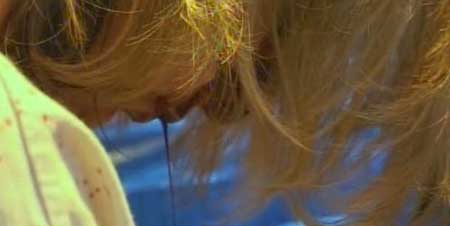 As far as the gore, horror fans will not be disappointed. Hammers and axes to faces and heads, dripping, gushing, pouring blood everywhere, and did I already mention torture? There is a specifically nasty scene early on when Doc stops interrogating Nadja and instead simply has his way with her. He slices and carves with a variety of sharp implements, complete with nasty squishing sound effects, all the while imagining that he is painting a beautiful masterpiece upon her nude body. The actual result is far less artistic.

The acting is pretty good, the cast mainly consisting of Timo Rose regulars. Each of the thugs is given their own personality, their own little idiosyncrasy (i.e. Mr. Sick loves pills, Honk hates the smell of smoke and keeps spraying his clothing to keep it off him, etc). While the names could have used some more thought, the differences between even the slightest of characters is much appreciated. The only big problem with Rigor Mortis comes back to the very beginning. We are introduced to a movie called Rigor Mortis – The Final Colours, then immediately learn about this computer virus, and in the end we are left still holding the bag, wondering about both. What does rigor mortis have to do with the story? And what is the virus for? The problem with Mutation was that Rose tried to fit a story of epic proportions into ninety minutes of movie. With Rigor Mortis, he cuts the running time to just over an hour, cuts the scale of the story down to a tell-able size, but then doesn’t tell us. All in all, it is a decent movie, with good gore and well-written characters. Throw in a somewhat surprise ending, and Rose has greatly improved on his past mistakes.