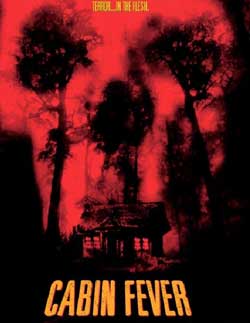 A group of five college graduates rent a cabin in the woods and begin to fall victim to a horrifying flesh-eating virus, which attracts the unwanted attention of the homicidal locals.

Recommended by Peter Jackson (most known for directing epic films such as The Lord of the Rings trilogy, King Kong and, most recently, The Hobbit: An Unexpected Journey) and Quentin Tarantino (most known for directing actions movies like Reservoir Dogs, Pulp Fiction, Kill Bill and, most recently, Django Unchained) alike, Cabin Fever really has got everything going for it. There’s a fine balance between humour and horror, sex and violence, the believable and the unbelievable – all of these aspects complimenting each other though, and not in a competitive, chaotic mess.

Most of us are familiar with the basic term ‘cabin fever’ – that is, the feeling of being trapped and isolated for a long period of time. However, the characters in Cabin Fever have to endure more than just this, what with a highly infectious, flesh-eating virus in their midst. It starts out innocently enough, as these things always do, with a group of college graduates who decide to have their own little ‘private’ vacation to let their hair down. We all know what this means though – sex and drugs and alcohol all round, with a small dose of mingling with drifters and shooting squirrels. This hedonistic party does not last long though, once they start to contract this deadly virus one-by-one and witness its horrifying effects on each other. A strain on the relationships takes place and it eventually succeeds in tearing them all apart (starting with their skin first!). There’s a heavy sense of futility surrounding this film, as the characters seem pretty much doomed to their fate, as no possible means of escape becomes available to them. The car doesn’t work, there are no phones or mobile phones to use, and for some reason there doesn’t seem to be anybody around nearby who can help. Typical horror movie stuff!

Unfortunately, the audition scene for one of the actresses was one in which she compares her hopeless situation to being stuck on a plane which is going to crash. Can anyone guess what day these auditions happened to fall on? That’s right, September 11th, 2001. Ouch! Despite efforts made to call off the auditions, they went ahead as planned. The acting is fairly good in general, with much of it a bit ‘tongue in cheek’, and Cabin Fever is even remembered rather fondly for the random ‘pancake’ karate scene. I actually really enjoyed the silly, exaggerated feel to the film, simply because it reminded me of some brilliant classic horrors from the 80s – it definitely had that style down to a tee. 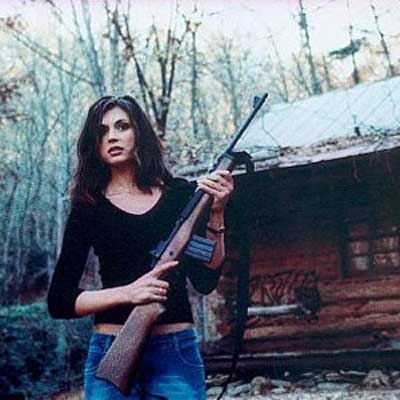 Apparently, the idea for the film originally came from director, Eli Roth (famous now for his Hostel franchise), who suffered from a skin infection when he was working in Iceland. He claimed that he broke out in sores which bled when he scratched, and his skin even started to peel away when he shaved his face (much like we actually get to experience in the movie itself!). He says that, ‘It’s a deeply personal film on many levels, but everyone’s had that experience where they notice a spot on their hand or neck and say “What is that?” Until you know what it is, you imagine the worst. That’s a very human thing to do, and that’s one of the reasons I think people really connected with the film.’

It is interesting to point out how closely death and sex are linked within this movie, and this is perhaps yet another horror trope to be explored. As the cult classic film, Scream, once boasted – sex in a horror movie equals death! This was illustrated by the editing of the scenes between something ‘sexy’ and something ‘gruesome’. There’s even one part where a man and a woman are having sex, and he grips her back so hard that we see the sores start to appear, thus mixing the two themes within the exact same shot! 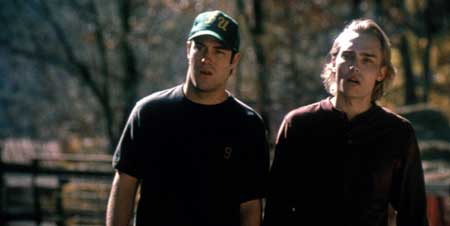 I think the most suitable conclusion would be to end with the words of Eli Roth himself, who describes Cabin Fever as ‘an homage to those 80’s kids-in-a-cabin splatter films like Evil Dead, but very much in the spirit of The Texas Chainsaw Massacre, The Thing, and Dawn of the Dead. It’s scary, but it’s also funny and very weird. I set out to make a roller coaster ride you could watch while getting drunk with your friends, where you’re laughing one minute, and screaming the next.’ This seems to sum up the film wonderfully, and I definitely think that Cabin Fever is a very entertaining horror to watch. It is indeed hard to belief that Eli Roth has to spend six years raising money for the film – every studio, Production Company and producer that he encountered rejected the script.

However, when Cabin Fever was shown at the 2002 Toronto International Film Festival, it became the highest selling movie of the festival. A bidding war ensued between a whole bunch of studios (many of which had earlier rejected the film!) and it ended up being bought by Lions Gate Films for an undisclosed sum in the ‘high seven figures’ (the most money that Lions Gate has ever spent buying a film!). Reaching a whopping $22 million at the box office, Cabin Fever was the most profitable horror film released in 2003 – now that’s a tale of horror success if ever there was one. 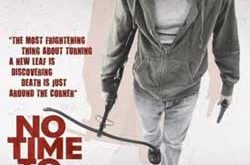