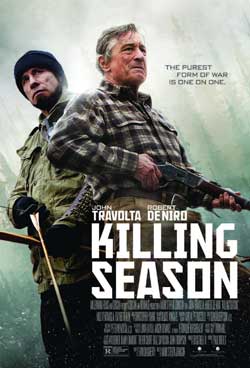 Each Benjamin Ford, an American Colonel and Emil Kovac, a Serbian soldier is haunted with memories of the Bosnian war. Several years later an inability to cope with the terror brings the two sworn adversaries together for one epic final showdown.

I’ll be the first to go out on a limb and state that I think Killing Season was a highly entertaining, enjoyable film and a rare delightful cinematic surprise. Despite all of the online message boards and dime a dozen bloggers that criticized the picture, I believe if one were to approach Johnson’s endeavor with an open mind, you too will be tremendously intrigued. With all of the negative press Travolta has received in recent months and the stock pile of lack lustre productions both DeNiro and Travolta had signed on for a preconceived notion of what Killing Season will be all about develops within the average person psyche placing an unfortunate blemish on the product before the initial credits have even rolled. 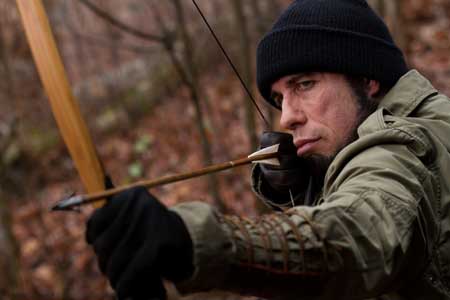 Make no mistake about it, I’m far from what one considers to be a war film aficionado and did feel a significant amount of dread when clicking the play button. The mantra of ‘not another war picture’ recited over and over within my mind. I wasn’t expecting another Deer Hunter or Saving Private Ryan but just couldn’t justify the necessity for another war film. Then something cinematically magical transpired.

Some most effective cinematography was utilized in the early scenes capturing the brutality and aggression between the Serbians and Americans with a dust laden filter emphasizing the grit, dread and unease. The lack of colour and drab hues placed the audience in the midst of the turmoil heightening emotion and anxiety. Instantly we’re invested into the plot determined to discover what could possibly unfold for an additional ninety minutes. 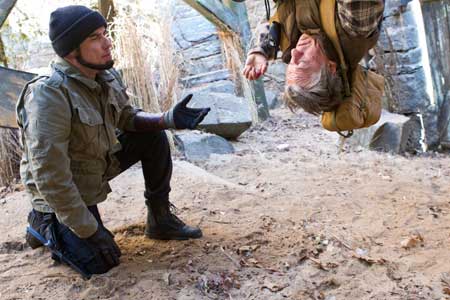 As the camera fades out and in once again we’re treated to some breath taking aerial shots of an American mountainous landscape. The visuals are of National Geographic or Discovery Channel caliber. It’s no wonder as to see why and how the character of Ford played by Robert DeNiro has become a wildlife photographer. It’s very subtle character development in its finest. Within a matter of seconds we see that he’s traded in his assault rifles and grenades and does all his contemporary shooting with a Nikon instead.

The basic premise of the plot is original and will capture the attention of many. Trust me this is not your ordinary run of the mill war film. The central theme of the Bosnian war will resonate among several generations of audiences being recent enough to not forget and distant enough to haunt us once again. 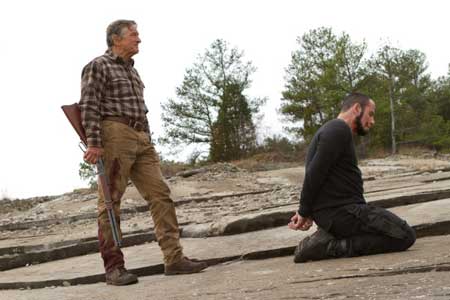 Performances are top notch and Oscar worthy as we’ve come accustomed to from DeNiro and Travolta from the earlier parts of their careers. The wide range of emotion is mesmerizing evoking an invested intrigue from the viewership. With their collective names on the marquee it should be enough of a draw to make this production a hit.

For fans of gore and extreme violence there is a little something for everyone. Some scenes will tantalize and satiate horror fans. Others at the same time will undoubtedly squirm and flinch from the sheer brutality. 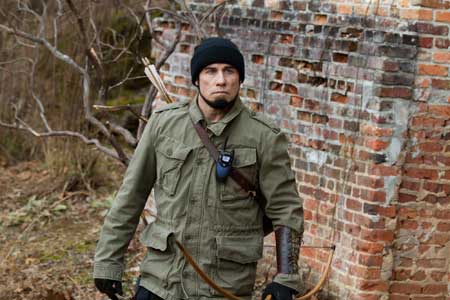 The story line within itself takes some interesting twists and turns. The term see-saw battle comes to mind. We also are treated to some comedic relief, a much welcome interlude and distraction from the blood and hatred. Imagine Travolta’s character of Emil Kovac singing Johnny Cash in a drunken, and arguably questionable Serbian accent.

Without divulging in any plot spoilers, it is noteworthy to mention some memory dialogue takes place between DeNiro and Travolta. As each reflects upon their own personal hell from the war we’re privy to a very human response to a traumatic, soul altering experience. 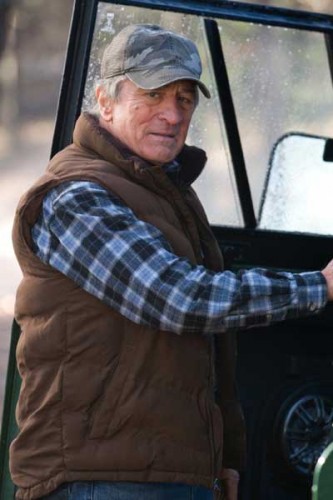 The final act is unusual, and against the traditional outcome one may suspect from a war-themed film. My most sound advice any avid film goers is to catch Killing Season, keep an open mind, sit back and enjoy the ride.