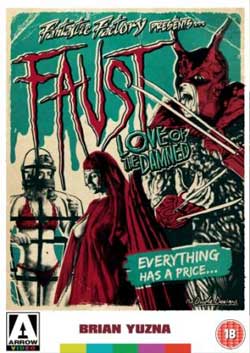 An artist, John Jaspers (Mark Frost) sells his soul to the mysterious M (as for Mephistopheles) (Andrew Divoff) in order to avenge the death of his girlfriend. However, the deal has an unexpected price, and he is periodically transformed into a horned demon with a passion for killing. He discovers that M plans to release a giant monster called the Homunculus, thereby opening the gates of Hell, and sets out to stop him.

This selection falls squarely into the category of “wanted to see this for years, but didn’t due to bad reviews” films. Though the film is largely hailed for its FX work and is based on a comic book by the same name. In fact the film “Spawn” a quirky favorite of mine, got some of it’s original ideas from this Brian Yuzna directed piece. Add to that the younger acting talents of Andrew Divoff and Jeffrey Combs (2001) and by all standards it sounds like a great package. Hell, even the synopsis is enough to draw you in.

So what’s the deal, you ask? Why so critically bashed in the media.? To be honest this film is a good reason why you shouldn’t believe everything you read because I found it to be alot of fun. I will comment on the flaws but lets get into the story.

The legend of Faust is very simple. The tale involves Faust selling his soul to the devil. This idea has been re-interpreted several times over in several Faust named films. The film and the comic leverage off that idea to it’s own take.

Our story begins with artist John Jaspers (Mark Frost) who is wrongfully assaulted by a group of thugs who kill his girlfriend in the process and destroy all his paintings. In result of the incident, Jaspers heads to the local bridge with the sole intent to end his life. Before he gets the chance, a brooding blond haired man who calls himself M offers to give him the means to vengeance in exchange for his soul. M is short for Mephistopheles, a powerful agent of the devil.

Jaspers excepts, signs and is given a set of self extending blades that emerge from his wrist devices at will to annihilate his enemies. Since we are all to accustom now to comic book abilities, the comparison to Wolverine’s adamantium blades and Freddy Krugers kill aids are expected. Though as simular as they are they still offer some slight differences. Regardless, Jaspers uses these things to slice though villains and policeman like butter. That alone is visceral in itself presenting the acts like something straight out of a Asian horror film. A love interest develops between Jaspers and his music toting psychiatrist Jade de Camp (Isabel Brook), though I found that less important to the plot which is based on action segments. Let’s just say that after Jaspers disappoints M, he is buried and transformed into a knife-toting anti-hero.

M who is played by Andrew Divoff, hits the screen with one of the better and believable roles of the devil. Well, ok not “the” devil, but close enough. His low toned soft spoken intensity is unmatched by many often resembling that of a evil Clint Eastwood presence. M is given plenty of screen time to show off his powers to those who oppose him. In one instance a failed opponent is consumed by a monster extrusion that pops out of M’s stomach to meet an untimely demise. Though a much remembered highlight has to go to the scene of M’s partner Claire who tries to up him one. As he waves his hand her breasts and ass grow to enormous slimy proportions turning her into a temporary mess of fatty flesh and goop. Let just say, it has to be seen.

Jeffrey Combs plays a much hipper Lt. Dan Margolies who is the protagonist on the case to get to the bottom of M, Jaspers and the whole underground operation. Why I say hipper is that our usual performance by Combs is much darker and enigmatic. His performance here is a lighter more action film equipped presence than usual. Though by the end of the film we get to see the Combs we know.

So where does the movie fail then you ask? Much has been reported about the overacting mainly from actor Mark Frost who comes across way too suffered at times. I think that aspect can be overlooked for what it is as his realization of “Faust” is comical, violent, and entertaining. The Faust transformed outfit comes across very “Spawn-like” but is still fun to watch. The film itself is very comic book like filled with a number of cutting edge FX work citing FX artist Screaming Mad George …. as one of the major contributors.

All in all, I still run into several reviews that absolutely hate this film, called by many the worst ever …however, I’m just not going to subscribe to that way of thinking. I did enjoy it, enjoyed the mix of performances and feel its definitely worth a look. I suppose comic book purists who read the original story find greatest faults, but I’ve never read the books and don’t intend to. So next time you pick this up and shake your head, give it a whirl. A few moments are bound to put a smile on your face.