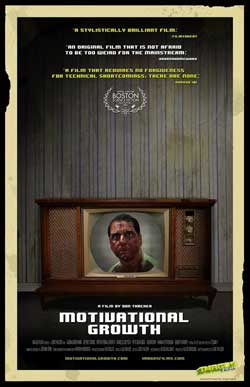 Ian Folivor, a depressed and reclusive 30-something, finds himself taking advice from a growth in his bathroom after a failed suicide attempt. The Mold, a smooth talking fungus who was born of the filth collecting in a corner of Ian’s neglected bathroom, works to win Ian’s trust by helping him clean himself up and remodel his lifestyle. With The Mold’s help, Ian attracts the attention of a neighbor he’s been ogling through his peephole, Leah, and he manages to find a slice of happiness despite his unnatural circumstances. But Ian starts to receive strange messages from his old and broken down TV set that make him realize that The Mold may not be as helpful as it seems to be, and strange characters combined with stranger events cast Ian’s life in the shadow of an epic battle between good and evil that Ian is only partially aware of.

Motivational Growth is a 2013 independent film following the trials of a man who had been shut up in his apartment for six months only to have his television break down, fail at suicide and have a sentient mold in his bathroom convince him that life can go on.

The film begins with the television named Kent owned by our main character Ian Folivor, played by Adrian Giovanni, breaking down after six months of isolation in his apartment. It becomes shortly clear that Ian is a shut-in who has given up on the outside world due to fear and disgust of how it is outside only to experience fear and disgust after the only thing keeping him grounded breaks down.

He is shown going through grief and trying to cope in a sped up montage before he finally breaks down and talks to the camera about how he has been living his life and viewing the world. As he does this, he begins to gather cleaning supplies to fill his bathroom with a lethal gas that will kill him.

The whole series of events is surreal and hilarious in a dark way, showing the worst of the human condition in a modern secluded environment. Everything is a string of thoughts one might have if separated from society and the monologue of Ian shows that in gross detail.

This kind of humor is subjectively enjoyable as it does breed an aire of the pathetic and needs to be taken with a grain of salt and a healthy understanding of why it’s wrong.

The second part of the film, the majority of it, is what follows. Ian moves to shut a vent in the bathroom to prevent the gas from escaping when he slips and is knocked out. Everything quickly becomes more confused as both Kent, who is broken in his living room, and a obscenely huge chunk of mold voiced by Jeffery Combs gain a form of sentience and start to fight over control of his attitude and actions.

The Mold, as he constantly reminds Ian to call him, is a smooth talking salesman type who spends the film working as Ian’s motivational coach, moving him towards getting his life together while Kent wants Ian back on the couch giving him attention.

For the most part, Ian ignores The Mold for the first third of the film and continues to monologue while trying to fix Kent. This leads to Ian slowly interacting with the outside world and dealing with the condition his life has progressed to.

The absurd amount of conflict that builds through all these events includes Kent becoming furious at Ian for ignoring him, The Mold berating him for not following his every word, Ian’s landlord demanding the rent and the girl across the way becoming an obsession for Ian.

The film gains some amazing things from this concoction of madness by keeping the audience entertained with a constant barrage of stimuli, strange characters that all stand out from one another by how they act alongside Ian and the bizarre visuals the come from Kent the television that mimic old 80’s commercials while talking to Ian and demonstrating what goes on in his mind every time he is knocked out on screen.

The clear problem drawn from all of this is that the film is absurd and all the negative things that come from something with a strained attention span of its own. The plot, for what plot there is, has been jammed in between one weird character and event after another. The Mold has its own reasons for trying to make Ian a stable member of society and Kent can only communicate through commercials so the two not only compete for screen time and Ian’s devotion but they also compete for which one is the least understandable.

Still, nothing is more oddly entertaining that Jeffery Combs as a mass of decay trying to talk in double-speak to a half-intelligent head-case.

The film has elements of camp, independent quirkiness and an almost Lovecraftian sense of dread which when combined can be entertaining but to such a narrow audience that it can only be recommended for those who have a true love for the surreal.