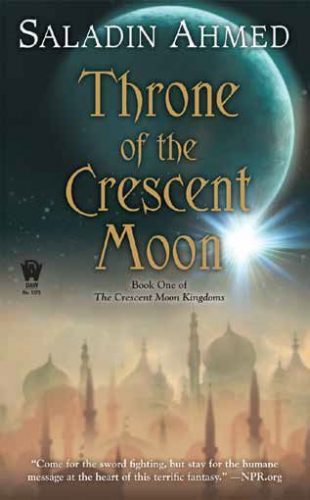 By and large, fantasy bores me. The biggest issue I have is that there so rarely appears to be any actual fantasizing involved anymore. For every shinning jewel of Abarat, there is some trite tales of elves, dwarves, dragons and wizards. Plus, I could not give the slightest fart in the wind about the maneuverings and machinations of the great. Kings, Lords, Lordlings and all can rot in my not remotely humble opinion. Luckily for you and I, Throne of the Crescent Moon does something different.

The Crescent Moon Kingdoms are in a time of upheaval. The Khalif is an iron fisted ass and a self-styled Falcon Prince is stirring up rebellion in the streets. Then there is the recent rash of supernatural murders, leaving victims torn apart, hearts ripped from their chests. Through this turmoil, a tired and aged Ghul Hunter, a young and self-righteous Dervish, the only living remainder of a mutilated Badawi band, a withering magus and his lithe Alkhemist wife are trying to find a way to survive and maybe hold their part of the city of Damsawaat together.

From the start, Ahmed had me pulled in with a mythology derived not from the staid old standard European tradition but instead pulling from the rich well of Arab and Persian culture. It’s amazing how much of a difference a cultural shift like this makes. The world he drew out became something new and (dare I say it?) interesting. I also appreciated how he makes use of what appears to be an analog of Islam that is clearly an important and pervasive element of the character’s lives without turning the story into one of religious diatribe.

But those surface trappings are not the only things that make this book stand out. Many authors aim for moral ambiguity by making all of the characters into assholes. Instead, here we have people who largely believe they have the best of intentions at heart, even when they are being selfish, petty and cruel. The choices laid out before them are hard ones, with no simple choice and no clear compass. Even some of the bigger douches have their reasons for being douches. It was refreshing to experience in a genre usually coated in black and white.

Of course, all the novelty in the world will only take you so far before you need a sold story, which this has. Ahmed moves along at a brisk pace developing a steadily worsening situation and throwing plenty of sword and sorcery . The action is tight and his prose is poetic without being self indulgent. Plus, he manages to work in the lifeblood of this society, culture and world in a way that never stops the narrative for a convenient infodump. Plus, ghuls, dammit. Ghuls!

Pure and simple, any fan of fantasy should well and truly adore this book and others of you like myself that don’t usually like it will still stand a decent chance of enjoying the hell out of yourself. I just hope that he has a long term goal for the series and that it doesn’t turn into one of those interminable meandering bits of nonsense so many other series have turned into.