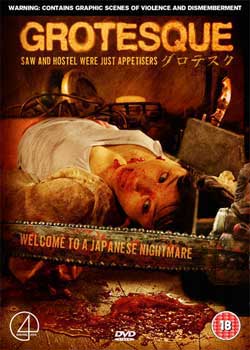 A young couple get abducted by a perverse sadist named Tachikawa who ties them both up in his basement and begins torturing them. If either of them happens to pass out from the intense pain, he revives them with smelling salts before going back to work.

Grotesque is really a mix of emotions. Brilliant, disgusting, well written, sadistic and painful to your sense beyond belief. Now if you are like me when a film proclaims things like – “King of Japanese”, “Saw and Hostel were just appetizers”….etc You wonder if the marketing matches the reality. In this case I have to agree with the plugs. This is actually more brutal than Saw and Hostel combined. Yet somehow it also has bouts of tenderness and compassion. Imagine that !

The premise is pretty solid and basic from the start. A stranger kidnaps a couple passing by, by knocking them out and throwing them into his van. Cut to the “lair” or some sort of facility. The young couple wakes up in chains, bondage’s, ropes and ball gag in mouths. Attached to a door or door-looking board they are now rats in a trap. The stranger wastes no time into prodding and poking them with his sharp instruments. Impaling the mouth and stomach of the male victim, the female victim gets to watch propped up across from him. This kind of starts like the trend we expect. …….Oh here it comes another film where the captor tortures the victim for 90 minutes. Well not quite, the story has its turns, motives and dynamics. Make no mistake “plenty” of torture is in this film. Some of the most brutal I’ve seen to date for that matter.

This is seasoned with mind games and life or death games in which the captor indulges for the satisfaction of highly internal sexual pleasure. What that is exactly, is kind of unknown but he lets us know when he gets there. Before really getting into the unpleasantries, he teases the female, prods here, cuts her clothes off and then seduces her to the point of orgasm. The male captive is forced to watch and yet the couple were only on there first date. A bond of sorts develops and a hate/trust sort of relationship begins with the sadistic captor …..or doctor for better terms.

Being a doctor means he can torture with accuracy without killing. He also tends to the wounds after infliction. How much you ask…? and what does that entail? Well let’s see ..a chainsaw and fingers incident in where he strings together a necklace for each of them to wear. Some titillating severing and quite few more awful visually unnerving scenes What us worse is that the doctor describe in detail what he is about to do. The subject is then given a choice in which either result is horrific. If someone get out of line ..they get extra tortures.

At one point the doctor proclaims ” I’m going to drive these nails into your nuts”…it will really hurt but if you surrender I torture the girl in your place. That is the rhythm of this film. Just when you thought you had it pegged on direction, you get a blast of something else. This is where the brilliance becomes in, The viewer becomes engaged even if you are compelled to look away. The range of emotional and human survival is unparallel in the film’s progression. And while this review reveals a few things, there is alot more here that hasn’t been discussed.

I give it an A for a great and outrageous ending that actually becomes 2 endings. Production is kept very minimal with minimal sets. That aspect is quickly forgotten in place of visceral impact.

I’m not sure what exactly to tell viewers. If the description is too much, then don’t watch it it. Though beyond it being a torture p*rn sort of film it has great carry rover from other Asian horror films. I would of thought this to be a CAT III film, but the ratings didn’t indicate that upon checking. The film is directed by Kôji Shiraishi and stars Hiroaki Kawatsure, Tsugumi Nagasawa, and Shigeo Ôsako.

I think the film is really important as a staple for the culture we are currently in. A little bit of history tells me that the film was rejected in the UK for release, and I can see why. Is the public ready for all this? or is this just another to join the pack of extreme violence in cinema? A solid effort that I am going to recommend to selective viewers….not for kids, families or anyone who doesn’t like extreme horror. There ya go. Now figure out which one you are and do the appropriate thing.