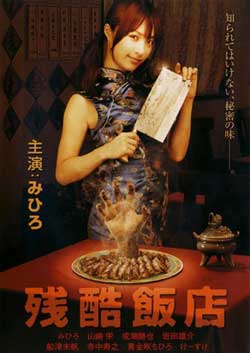 There’s something strange going on with the filling in those dumplings the town’s raving about… What the hell are they made of?

The Examination: You truly won’t believe how the dumplings are prepared in this gonzo sex ‘n splat circus.

One thing about Asia’s Cat III films, you can count on the limits being pushed to the utmost extreme just short of up-close penetration. Otherwise, it’s game on, J-sploitation-style and in the case of Koji Kowano’s Cruel Restaurant, sex, rape, gore and a truly twisted punchline are thrown devilishly at the viewer in high stakes foolishness.

A local restaurant with a reputation for serving the best dumplings in town falls under suspicion from a reporter, a pair of inept detectives and a food critic seeking her missing sister whose last known whereabouts is the restaurant in question. As the movie opens with a severed arm washing upon a nearby beach, immediately the inquisitive characters all hone in on the restaurant (conveniently within the same timeframe) and are thwarted in one way or another by the high-strung chef, Mr. Chin.

The movie is mostly focused around the gorgeous Ms. Lin (Mihiro Taniguchi, credited simply as Mihiro), the restaurant’s waitress and a seeming understudy of Mr. Lin. The more she is stalked by the main detective and a basket case apprentice apparent, the more Cruel Restaurant attempts to throw its audience for loops. As bodies begin to mount through the movie, the lingering hypothesis is that the cleaver-happy (and alpha dog protector of Ms. Lin) Mr. Chin is serving up the carved meat of his supposed victims in the popular dumplings.

From here, Cruel Restaurant lets us dwell on this assumption while we learn more about Ms. Lin’s past. As she and Mr. Chin turn the aspirant tyro away, we learn that Ms. Lin herself was an apprentice to a geezer martial artist/dumpling maker and forced into sexual subservience as training for the family’s secret dumpling recipe. Of course, this is merely an excuse for us to enjoy repeated exposure of Mihiro’s tight little bod, even if the sexual twaddle does figure into the film’s outrageous resolution. To up the ante so to speak, Koji Kowano directs Mihiro into a long and debauched rape sequence by the scorned apprentice who douses her with eggs, ketchup and flour as part of his own sick foreplay.

Where Cruel Restaurant tries to trick its audience is to having us believe everything happening to Ms. Lin is a figment of her imagination, everything from the talking severed head of her rapist to her purported butchery job of the food critic. In these proceedings, Cruel Restaurant jacks up the gore in drippy fashion. Considering the lopped-off arm in the opening scene looks horribly phony, the bloodier the scene Kowano calls for, the more convincing it comes off.

It would be dishonorable of this writer to give away the film’s finale, but let’s just say some dumplings are apropos with sushi in this nauseating eatery. This film is quite nuts, if it’s not indicative through this write-up. Cruel Restaurant is borderline horrible yet there’s something stupidly fascinating about it nonetheless. It doesn’t hurt Mihiro is pure eye candy, which compensates for the stomach-churning revelation of how those allegedly tasty dumplings are derived.