Home | I AM ZOZO – Ouija Board Thriller Announced by Image Entertainment

I AM ZOZO – Ouija Board Thriller Announced by Image Entertainment

Image Entertainment, an RLJ Entertainment (NASDAQ: RLJE) brand, has acquired U.S. rights to Scott Di Lalla’s Ouija board thriller I Am ZoZo from Outsider Pictures and One World Studios Ltd. The film was written and directed by documentarian Scott Di Lalla (Choppertown: The Sinners) and stars Kelly McLaren, Courtney Foxworthy, Demetrius Sager, Caleb DeBattista, and Caleb Courtney. The film was produced by Zack Coffman and executive produced by Martin Perlberger. I Am ZoZo was filmed entirely on Super 8mm and recently received Best Feature and Audience Choice Awards at the 2012 US Super 8 Film Festival. Bill Bromiley, Chief Acquisitions Officer for Image Entertainment made today’s announcement.

“Di Lalla’s background as a documentary filmmaker brings realism to I Am ZoZo whose subject matter is terrifying in itself,” said Bromiley. “We are excited to share with viewers Di Lalla’s uniquely artistic vision of this supernatural horror genre.”

I Am ZoZo centers on five young friends who play with a Ouija board that inadvertently summons the malevolent Ouija demon “ZoZo.” The film’s horrific account of possession is based on widely reported real experiences with this ancient and evil spirit that attaches itself to people exclusively through Ouija boards.

The deal was negotiated by Mark Ward on behalf of Image Entertainment, Paul Hudson of Outsider Pictures and Zack Coffman of One World Studios Ltd.

Tags I Am ZoZo image Entertainment 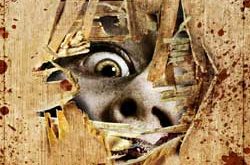