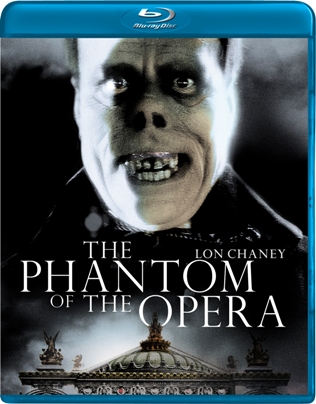 “At the Opera of Paris, a mysterious phantom threatens a famous lyric singer, Carlotta and thus forces her to give up her role (Marguerite in Faust) for unknown Christine Daae. Christine meets this phantom (a masked man) in the catacombs, where he lives. What’s his goal? What’s his secret?” (courtesy IMDB)

This week I’m extremely pleased to discuss a film that is good – mostly – sometimes. This is the first film version of The Phantom Of The Opera (1925), starring that Man Of A Thousand Faces, Lon Chaney Senior. Have no fear of oppressive over-orchestration and cacophonous caterwauling, for this was made in 1925, when the absence of sound technology protected all cinema-goers from such a disagreeable experience. The Phantom Of The Opera is what they call a Universal Super Jewel, named that to raise it above the undistinguished low-budget formula films that normally kept the studio in profit. A reader at Universal decided Gaston Leroux‘s 1911 novel would make a popular film, concluding that “If we do it, for God’s sake, let’s not botch it!” – although I believe a more colourful term was used, rather unusual since it was a black-and-white film.

Naturally, this sensible advice was ignored by the studios when they hired Rupert Julian to direct. An expatriate New Zealander, Julian was an unimaginative hack who, in 1918, had directed and played the lead in The Kaiser Beast Of Berlin (1918), a huge box-office success in that dangerous year of bullets and influenza. I am happy to say they had enough residual good sense to cast Lon Chaney as The Phantom, and it was his acting, along with a number of remarkable sets designed by Ben Carre, that makes the 1925 version of The Phantom Of The Opera a film well worth watching.

The Phantom Of The Opera was a much-troubled production. For a start, the director and the star wouldn’t speak to each other. I knew Lon Chaney personally, and he was a very nice man who got along with everyone, so I’m blaming Rupert Julian again. He wanted a much broader performance than the one Lon had in mind. The cinematographer was forced to act as go-between to convey the director’s instructions to the star, but Chaney just ignored Julian and did as he pleased, and rightly so. Lon had already given many great performances and was not about to be hampered by a hack.

Alas, that cannot be said of his leading lady Mary Philbin, who came second in a Chicago beauty contest in 1920. One of the judges was powerful actor-director Erich Von Stroheim, who suggested she come to Hollywood. When Mary arrived a year later, Von Stroheim had already cast the major roles in his current film Foolish Wives (1922), so he gave her a walk-on part and promised her a prominent role in his next film, giving her the lead in Merry-Go-Round (1923). But both his extravagance and his lengthy shooting habits resulted in Von Stroheim being fired from that film and his replacement was none other than Rupert Julian, who imagined himself as good a director as Von Stroheim, a sad and pathetic delusion with absolutely no basis in reality.

Mary Philbin’s acting in Phantom Of The Opera is the the sort of performance that gives silent film acting a bad name. As the none-too-bright Christine, it seems to take her an eternity of flailing arms and gesticulation before realising her mysterious mentor and the malevolent Phantom are one-and-the-same, which Rupert Julian is also to blamed for. By way of proof, she was made the leading lady opposite Conrad Veidt In The Man Who Laughs (1928), another Universal Super Jewel and a much better director, Paul Leni, was able to draw a more subtle performance from her.

I myself was involved in Phantom Of The Opera. I modeled for the mask the Phantom wears to the Masque Of The Red Death. We knew that even a murderous phantom would dress-up for a ball, and his usual mask just wasn’t stylish enough. You can see a large-scale version of it several times among the backstage props. A fight scene in a graveyard where my head was used as a weapon was filmed, but cut when it became clear I was stealing the scene from my co-stars. The story of my career! That change was just one of many made during filming and test previews. Subplots were added and then removed, and comic scenes were filmed then discarded, it’s really quite amazing the film is as coherent as it is.

After having seen the 1925 version of Phantom Of The Opera, your first question will probably be “Who on earth was that messenger from the shadows who appears to give a vague warning and is never seen again?” He’s the theatre’s rat-catcher, which was initially a bigger role but gradually discarded, although for reasons obscure, that single scene was left in. And what happened to that horse Christine rides on her first journey into the underworld? I hope it found its way out okay!

The ending was also changed. Originally The Phantom simply drops dead while playing the organ after having done a good deed, and the avenging mob arrive at the Phantom’s lair too late. This ending was universally acclaimed as completely lame, so Edward Sedgewick, better known as a comedy director, was brought in to shoot the final pursuit through the streets of Paris. He did quite well, despite not having access to his usual custard pies, banana skins and clumsy cops. Despite all these problems, The Phantom Of The Opera was a major box-office success and many critics listed it among the ten best films of the year. The combination of marvelous sets and Lon Chaney’s fine acting was a winning one.

Finally, I’d like to pay homage to the courage of Parisian opera lovers. I’m in absolute awe of the way they flock to a performance of Faust, just two nights after so many of their fellow opera buffs were squashed beneath an enormous chandelier, now restored to its place above their heads. Maybe they should try something safer, like running with the bulls in Pamploma. So please join me next week with your morbid curiosity well-prepared for another step beyond the inner limits of the outer sanctum with a touch of evil from the amazing zone known as…Horror News! Toodles! 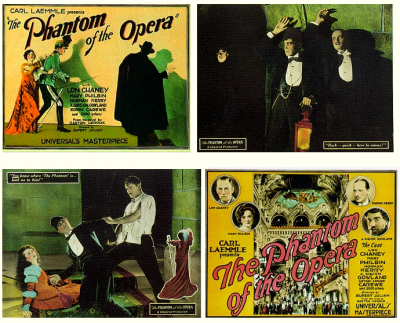