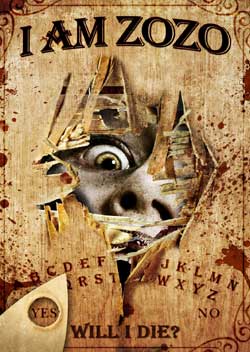 I Am ZoZo is a psychological thriller about five young people who play with a Ouija board on Halloween and attract the attention of a malevolent demon. The film is based on real experiences with an ancient and malevolent spirit called ZoZo that attaches itself to people exclusively through Ouija boards.

In the world of DTV (Direct To Video) film releases, cover artwork is really important. A dog of a film can get some really snazzy cover art and sucker someone into renting/purchasing it (I’m talking to you NIGHT OF THE NAKED DEAD). I Am ZoZo has some very interesting artwork on it’s cover, definitely designed to catch your eye but does the movie come close to replicating anything that the cover promises? Unfortunately the answer to that question is no. 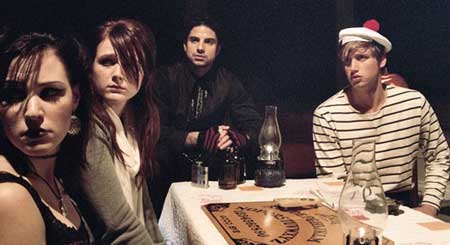 It all begins in a way that we’ve all seen a million times before, a group of young adults driving up to a remote cabin in the woods to hang out, drink & do what unruly 20-somethings do when they’re off partying in a cabin in the woods. After some quick introductions and establishing that there isn’t any electricity in the cabin, they discover a Quija board and begin to play with it. One of them, Mel (Courtney Foxworthy), just happens to be a Wiccan so she sorta runs the game while the others try to interpret anything that any spirits they come in contact with say to them. After some muddling around they manage to get in contact with a spirit that calls itself ZoZo. Directly after that, ZoZo seems to take a shine to the one character that just happens to have issues, Tess (Kelly Mclaren), and then stuff gets hard for everyone involved.

And that’s because (SURPRISE!!) ZoZo is one malevolent son of a gun.

Now while all of this might sound familiar (Ever see a flick called Witchboard?), in the right hands this scenario can still work wonders and scare the crap out of us. But writer/director Scott Di Lalla decided to take a different approach here and in doing so gives us a vastly different movie from the one the cover art promises. I Am ZoZo isn’t really a horror film…it’s a drama with a few horrific elements and quite frankly those moments aren’t that horrific. 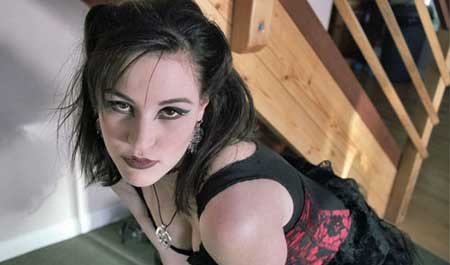 It kills me to say that the film is just dull because it had a ton of potential to be something really creepy. The idea of a evil spirit waiting for someone to contact it through a Quija board and ruin their life is intriguing but what we get here is literally a chatfest that never rises above anything more than a dull drama. It’s almost as if that’s what Di Lalla aspired to achieve and while I have no problem with watching a good drama that’s not what the box art promises. The characters aren’t interesting enough on their own to warrant investing nearly 90 minutes into them and while ZoZo is mentioned often, he’s never seen. He performs some deviltry in the beginning and at the end but it’s momentary and not at all scary. And while I’m not gonna get into them, there are some really dumb moments that just made me scratch my head & wonder why I do this for a living.

All of this is based on a supposedly true story and the film features a cameo from Darren Evans, who claims to have some experience dealing with ZoZo. I’ll bet his story is a lot more interesting than what’s presented here too. There’s a really interesting interview with Mr. Evans that, if nothing else, proves that he believes that ZoZo is real. And believing is half the battle isn’t it? But I couldn’t believe that such an interesting premise was shoved to the side and left to wither while I listened to a lot of dull chat from people I had no interest in. 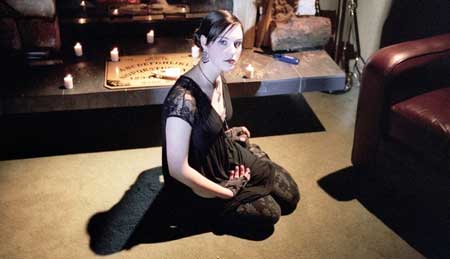 I Am ZoZo was shot in super 8 & while that’s a laudable enough enterprise, it adds nothing to the overall look of the film. I’m supposing that Di Lalla wanted to prove that a full length feature could be shot using super 8 film and he succeeded in doing so. But while he was busy making that a possibility, he forgot to write a scary script. I can honestly say that NOTHING happens in this film…NOTHING! And it doesn’t even give us a little stinger at the end, something to make us feel better about watching it…something scary. Nope, it just ends with no fanfare whatsoever and a odd, but interesting sounding end theme playing over the credits. Whoever the lead singer is, he sounds like Neil Young did circa 1973 or so, I kinda dug it. 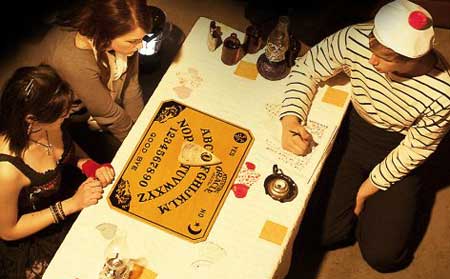 I Am ZoZo barely works as a drama but it doesn’t work at all as a straight up horror film. It just talks, and talks some more all the way to its decidedly distaff end scene. It looks/sounds good but buyer/renter beware…you’re not getting what the cover promises.

I Am ZoZo – One of five shrouds

I AM ZOZO – Ouija Board Thriller Announced by Image Entertainment 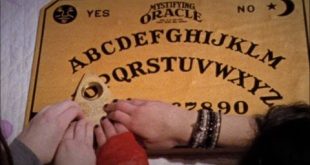