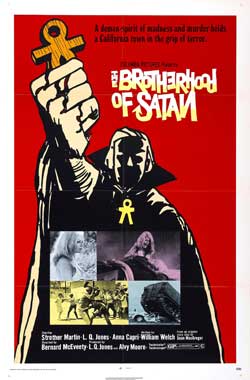 A family is trapped in a desert town by a cult of senior-citizens who recruit the town’s children to worship Satan.

From the flurry of Satan-titled films that have rolled out over the years, I’m always up for reviewing another in hopes that it has some sort of 70’s weirdness going on. This 1971 release surely is no exception to that rule though its premise and rhythm are a bit off for my tastes (even with its inherited weirdness). Directed by Bernard McEveety “The Brotherhood of Satan” arrives on “that” Satan-title trend trying its best to entertain but tripping over its intentions in the mix. My first exposure to this film arrives on the double set bluray release by Mill Creek Entertainment, which by the way, does a pretty decent job at getting an old forgotten film into bluray-appropriate showcasing.

The film begins as Ben (Charles Bateman), his daughter K.T. (Geri Reischl) and girlfriend Nicky (Ahna Capri) are out off on a road trip heading thru the Southwest. As they make their way across country they come upon a horrible accident that left a car and its family smashed like a pancake just outside of the town of Hillsboro. This proves to be enough cause for alarm that they run to Hillsboro to report the findings. Upon entering, they are approached by one slightly paranoid local sheriff, (L. Q. Jones) who runs things with his assistant Tobey (Alvy Moore) (who both in addition to the townsfolk come running towards the family in an almost manic style introduction).

The event is escaped by a quick hightailing it out of there only to find that they are destined to stay when they crash their car into a roadside telephone pole. This begins the quirky explanation of a town that seems to have it residents trapped with an inability to leave. It is also explained that the children of the town have gone missing and that murders of many of the adults are stacking up rapidly. This “stacking up” becomes literal as we are brought into a storage shed that displays the dead in a macabre style setting basically telling the tale of the much carnage that has occurred over the last few days. We are given a “hint” fueled by Satan possessed children who inflict weird mind games upon their parents (who quickly die off without any physical interaction). 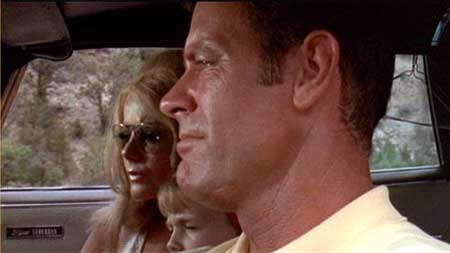 Running alongside is a back story that has a coven of witches gathering (now in their old age) for a ritualistic ceremony that pays homage to Satan and the promise of eternal life. The film tries its best to make this all work under the 2 stories but also does so in a way that comes across rather silly. The FX are generally weak here and the dialog is …well, a bit odd when the coven exchanges rants back and forth. As we learn, the children provide an almost sacrificial purpose that never really is entirely revealed. The reveals are noted in several illustrations that are shown like slides during the film to paint in some of the historical back droppings.

What works here is that the film is just B-grade and dorky feeling at times presenting a film that is obviously flawed but rich in its flawed fragmented layout. Actress Ahna Capri is the hottie here that resembles quite a few other actresses of her time…namely Ann Margaret. The 70’s trend is very apparent in their styles and film look. 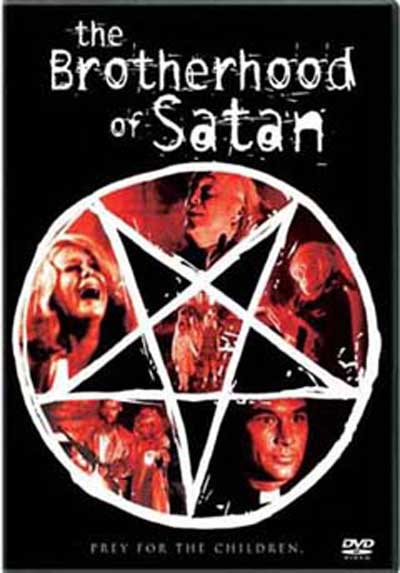 The ending of the film is a bit abstract as well, which I’m guessing was assumed by the director to be more understood than it “actually” was. “The Brotherhood of Satan” was reported to have been filmed in Albuquerque, New Mexico which provides the barren setting. The film also uses the expression “Come in, children.” several times to trademark it (in a sense). The “Come in, children.” expression was later used as an alternate title for the film release itself.

Interested? Check this out on the bluray double pack release by Mill Creek Entertainment 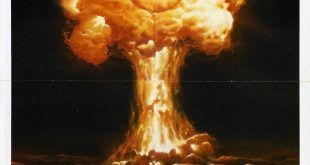