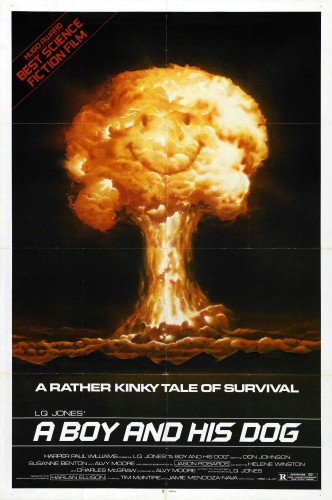 SYNOPSIS:
“Don Johnson plays a young man in a post-nuclear war world who has an interesting friend, a telepathic dog. The dog gives him an advantage in dealing with the barbaric world he lives in. When Johnson finds one place that has escaped the devastation of the war, he also finds some rather odd attitudes.” (courtesy IMDB)

REVIEW:
A Utopia is a good place. A Dystopia is a bad place. Science fiction in the optimistic nineteenth century tended to be Utopias, but the twentieth century (living with such scourges as nuclear weapons, pollution, unemployment and several world wars, besides such irritants as television, Freudian psychology and Heisenberg’s Uncertainty Principle) has concentrated on the Dystopia. A theme which would dominate such futures is life after the collapse of civilisation as we know it, after the bomb, or plague, or something simpler like running out of oil. Oddly enough, such films can have their cheerful moments, too.

A Boy And His Dog (1975) was put together by a strange team: Director L.Q. Jones (well-known bad-guy character actor) and science fiction author Harlan Ellison. With another actor, Alvy Moore, Jones had started a small production company specialising in low-budget horror films, of which the best had been The Brotherhood Of Satan (1970). As so often in Hollywood, it is the small independents who will take risks with material that the major studios would be frightened of touching. Ellison’s original award-winning story quietly assumes that after nuclear war, conventional human priorities will certainly differ, in ways that might seem very offensive to us today. 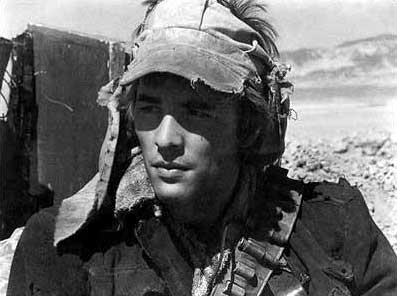 A decade before starring in Miami Vice as detective Crockett, Don Johnson plays the teenage boy, Vic. His dog, a shaggy mongrel called Blood, is in telepathic communication with Vic, and we hear his voice, too. Crisp, world-weary and middle-aged, as spoken by actor Tim McIntyre. In fact one of the highlights of A Boy And His Dog is the machine-gun dialogue between Vic and Blood, taken almost word-for-word from Ellison’s original story. They are like a comedy team cast in an absurd play, and the film has some bizarre humour and a terrific performance by Tiger, who plays Blood (a veteran actor by 1975, Tiger is best known for his role as The Brady Bunch family pet). Anyway, their partnership is symbiotic: Vic finds meat for Blood, and Blood finds girls for Vic to rape. All this happens in a wasteland of dried mud and dust from which the tops of buried buildings occasionally project, relics of the pre-war days before 2024. 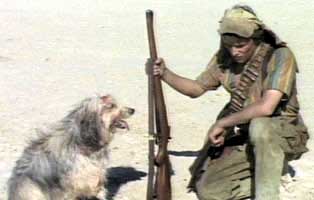 The title, with its evocation of innocent boyhood days before the adult responsibilities of love and maturity, is not entirely ironic. The terrible world Vic and Blood inhabit (brief, violent skirmishes for food being everyday stuff) is all they know and it’s not too bad. They can even go to the movies – scratched, yellowing old prints projected in a tumbledown shanty. In one good scene Vic and Blood are lying on their backs, silhouetted against a splendid sky, wholly content. As if this world were a paradise with infinite possibilities. Blood asks “What do you want to do tonight?”

Into this bedraggled Eden comes a female serpent named Quilla June. Vic is about to rape her, but she seduces him and then persuades him to come underground where another quite different life goes on. There he finds a stern, repressive, agrarian society policed by a killer robot dressed as a country yokel. People are painted with grotesquely cheerful clown makeup. Vic has been lured there because they need his sperm to impregnate the local girls. This sounds cool, until he learns to his consternation that they intend to mechanically milk him! Eventually he escapes with Quilla June, who now loves him, and rejoins Blood above ground. Blood is hungry. Vic looks at Blood and looks at Quilla June. We cut to Blood, now replete, saying “She had marvelously good taste.” The cannibalistic ending was Ellison’s but the gag was not, in fact he hated it for its unfeeling crudity, which he regarded as sexist. 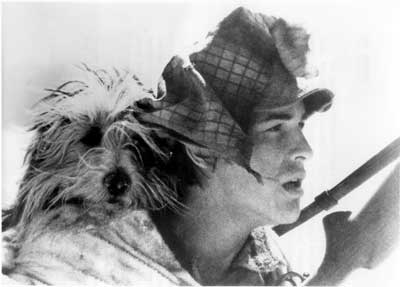 A Boy And His Dog may not be a great movie, but it is one of the most imaginative science fiction films of the last century, and one of the most plausibly brutal, too. And it’s on that sour note I’ll bid you a good night and look forward to your company next week when I have the opportunity to put goose-bumps on your goose-bumps with more ambient atmosphere so thick and chumpy you could carve it with a chainsaw, in yet another pants-filling fright-night for…Horror News! Toodles!