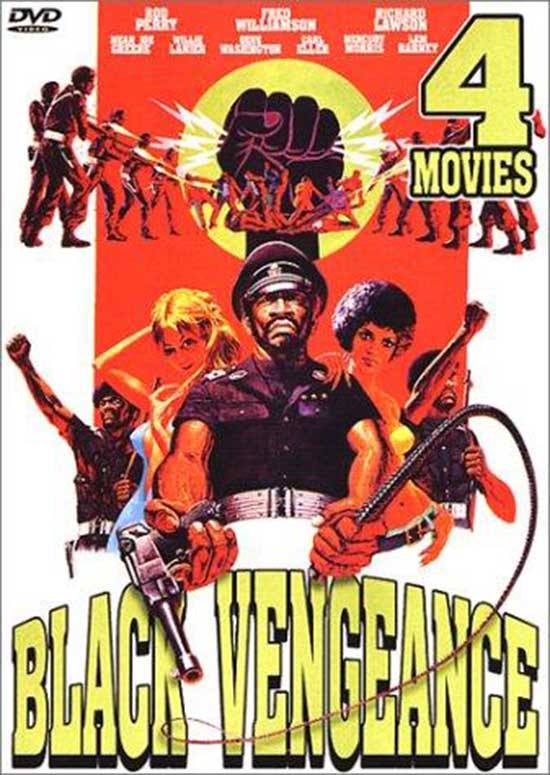 General Ahmed has started an inner-city People’s Army to try and relieve the misery of the citizens of Watts. When the locals are put under increasing pressure by Mafia thugs, Ahmed’s second-in-command Colonel Kojah asks for permission to start a protection squad to take more direct action. Ahmed fears this protection squad will just turn into a vigilante mob, and his prediction soon proves correct. Will Ahmed be able to wrest control back from the power-mad Kojah, or will he be the mob’s next victim?

The Black Gestapo is an interesting entry into the Blaxploitation genre of the 1970s. The movie centers on General Ahmed, who runs something called The People’s Army in the Watts neighborhood of Los Angeles. His organization was given a grant from California’s governor to help clean up the area, which Ahmed uses the funds to set up food banks and rehab centers. His main problem is the white mobsters that are running drug rings, prostitution, and protection rackets in the area. After his girlfriend is attacked, Ahmed agrees to let his second-in-command, Colonel Kojah, to set up a security team to help keep people safe. Kojah, however, has his own agenda. He runs the mobsters out of Watts and soon he and his men have taken over their criminal enterprises. It soon falls to Ahmed to stop his out of control colonel. 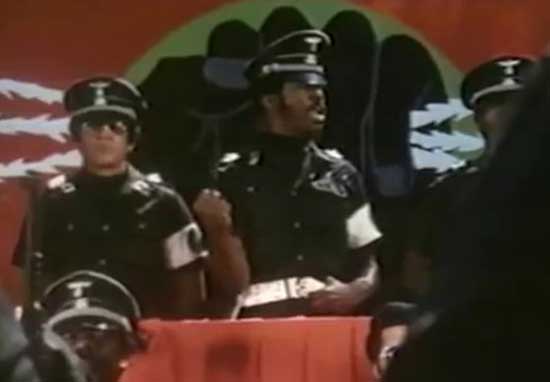 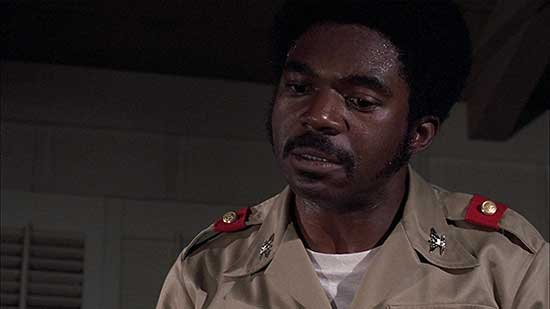 After the end credits to The Black Gestapo rolled, I found that there was a lot to like. It’s a movie with a fair amount of action and moves at a reasonable pace, so it never gets boring. It’s an exploitation movie, so it does have the nudity, violence, and grittiness one would expect. If you’re a fan of those elements, you should be pleased with what it has to offer. Another thing that really works is in the final act of the film you get to see General Ahmed go full Solid Snake by sneaking into Kojah’s compound and killing the majority of the man’s corrupt force. It’s completely awesome and fun to see Ahmed single-handedly kick multitudes of asses.

The name of the movie, while provocative, was well chosen. Kojah essentially created his own version of the Gestapo. His men operated by their own rules, becoming a law unto themselves. The instilled fear into the very people they were meant to protect and abused them as much as the external threats to their neighborhood once did. Kojah, in his own bid for power, became as much as an enemy to the Watts area as much as the mobsters he was trying to chase out. The more militant and violent his group became, the more they began to mirror the German Gestapo of World War II. The film’s title may have been chosen just to attract attention and assault people’s sensibilities, but the filmmakers at least did a reasonable job justifying the name.

On to more technical matters, the cinematography, editing, and sound were pretty solid. The acting itself, while not exactly award-winning caliber, was fairly decent as well. There wasn’t anyone so terrible that they detracted from the scenes they were in. The finished product was a very competently put together package. 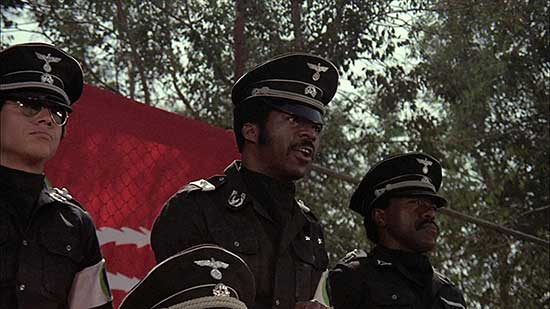 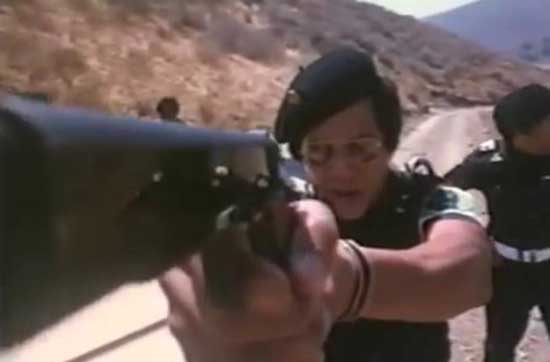 While there are some positives to be found, there were still quite a few problems. It did bug me that a bunch of the characters verged on being cartoonish, which made it hard to take some of them seriously. The Mafia antagonists were walking mobster stereotypes which just served to undercut the menace they were supposed to exude. It doesn’t help that once Kojah’s men fight back the Mafia guys just give up. It’s unrealistic when one considers the reputation of organized crime. While the mobsters came across as being kind of silly,  it was Colonel Kojah who truly bordered on the ridiculous. The movie made him so aggressive and militant that he started to be over the top. He’d get an exaggerated bug-eyed look on his face in some scenes that I couldn’t help but giggle. Another issue the film never shows him trying to justify his actions, like most villains are wont to do, nor does it provide any depth to him. His only real motivation seems to be simply that he’s the bad guy. 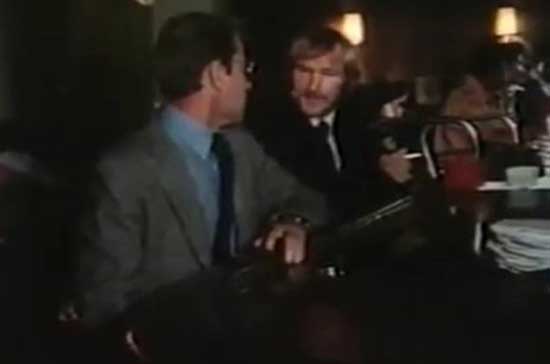 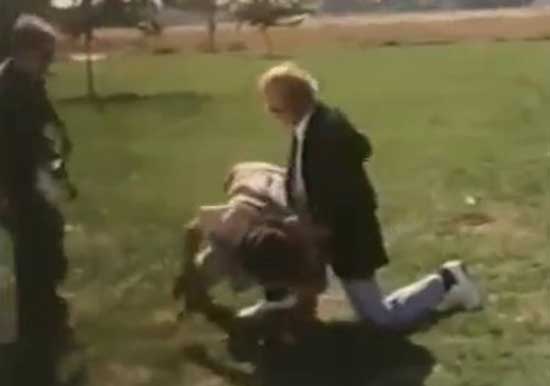 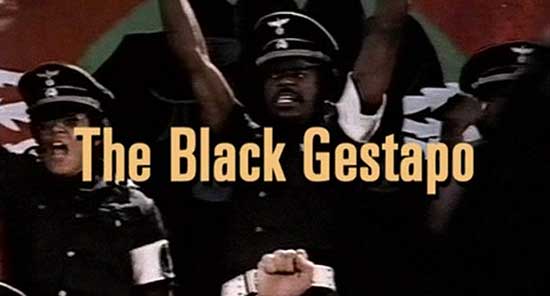 Frustratingly enough, our main hero, General Ahmed, is absent for a good portion of the film. The entire second act is dedicated to showing Kojah’s men taking over the crime rackets that the Mafia once ran, setting up a compound to operate out of, and committing varying acts of violence. Ahmed is barely seen at all while this is going on, so we’re not given much of a chance to get to know the character or see him developed in any meaningful way. He’s just set up to be our protagonist simply because he’s the good guy without much of chance to really understand who he is and why he’s taken on the responsibilities he’s assumed. We also don’t know why the governor of California would give Ahmed and his organization funding over other potential candidates, why he chose to form a paramilitary group, or anything about his background. There’s no reason for us to expect him to use commando-style tactics that he does in the end because we know nothing about him. Was he former military? A Vietnam vet? Not getting to know anything about Ahmed ultimately hurts the character and our chance to buy into his later acts of badassery. 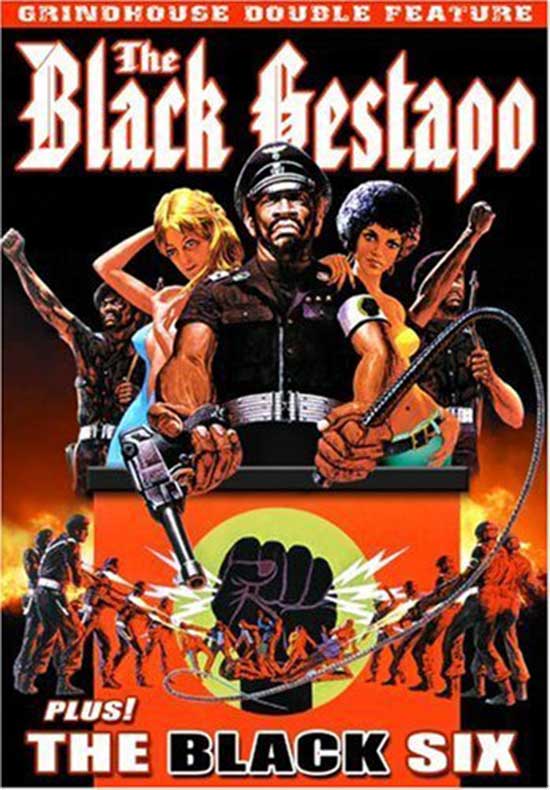 Black Gestapo is a flawed movie, make no mistake. However, the movie still manages to be entertaining enough to overcome most of those gripes to make for a fun time. I found that I enjoyed this particular flick, and I think it’s worth a watch, particularly for fans of exploitation and blaxploitation films in particular. It’s not the best of those genres, but it still kicks ass.