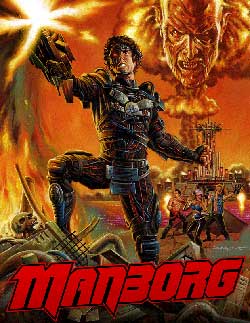 A soldier, brought back to life as a cyborg, fights alongside a band of adventurers against demon hordes in a dystopian future.

I may remain far too engulfed in an after glow of giddiness to complete a coherent thought here, but I’m going to give it the ol’ college try at any rate.  I speak not of the pain killers prescribed me recently due to an abscessed wisdom tooth when I describe my delight, though those little devils were pretty freaking awesome as well.  What I’m rambling on about is the joy of witnessing a unique new voice in film making, and the goofy, lasting grin a mere movie can plaster across one’s countenance.  That is an impressive feat indeed, friends, and precisely what our latest offering effortlessly accomplishes.  Long story short, “Manborg” is better than Percocet. 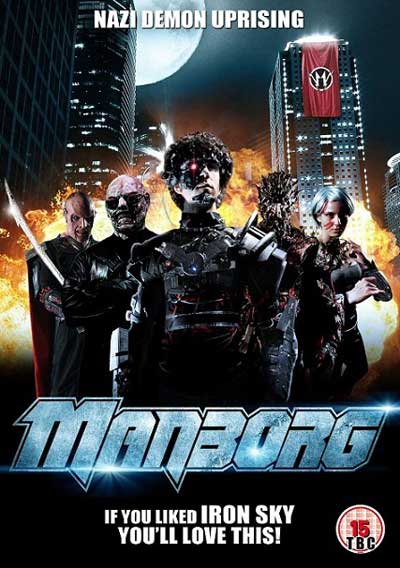 Both a winking spoof of and homage to the cheese ball sci-fi action flicks of the 80’s would be the go-to description, but “Manborg” is so much more than mimicry.  A product of Astron 6, a Canadian franchise who cut their feature length teeth on both this film and the straight horror flick “Father’s Day” (which I now must see) in the same year, this is a textbook example of what can be accomplished with barely a budget to speak of.  I’m growing to adore the new crop of Canadian film makers.  Two of my favorite “ABCs of Death” segments were mad Canuck concoctions, perpetrated by Kaare Andrews and Jason Eisener.  The latter also directed one of the wonkiest films of 2011, “Hobo With a Shotgun.”  In just 62 minutes, director Steven Kostanski and writer Jeremy Gillespie have also  won their ways into my heart.  These dudes are talented as hell. 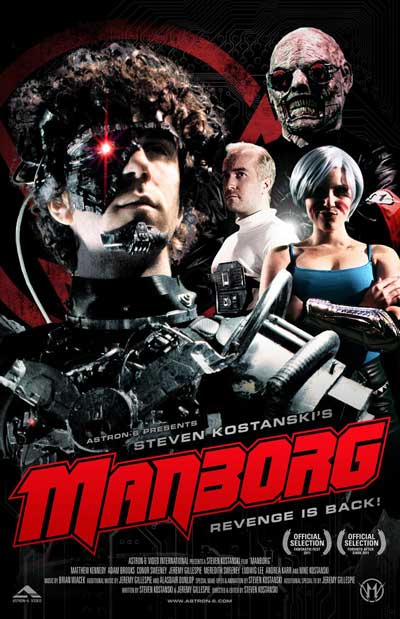 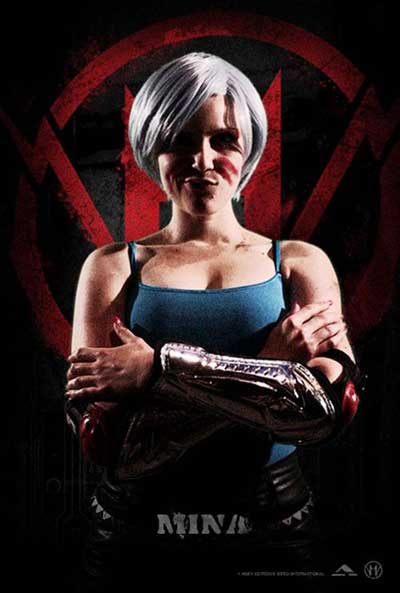 We begin amidst a war between Earth and an army of demons from Hell, here via a portal to the underworld unwittingly opened by Doctor Scorpius (Adam Brooks, who also portrays main heavy Draculon), and the mortals are getting it handed to them.  A weak but courageous soldier (Matthew Kennedy) watches as his platoon leader brother is murdered on the battlefield by Draculon.  After unsuccessfully waging a one-man attack against the horde, he is resurrected with robotic parts (including guns and an elbow rocket launcher) for reasons later revealed by Scoripius.  He awakens in a dystopian society ruled by the evil empire, and is soon captured by Draculon’s Killborg henchmen.  That’s right, he has Killborgs, brought to life with the woefully all-but-forgotten employment of stop-motion animation.  This is geek heaven stuff. 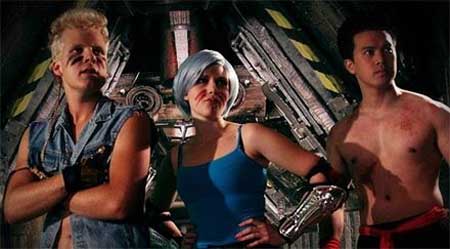 While imprisoned, Manborg (the only name we ever know him by) befriends three human fugitives, consisting of hot-headed Aussie Justice (Conor Sweeney), his sister Mina (Meredith Sweeney) and martial arts master #1 Man, portrayed by Ludwig Lee with a hilariously blatant overdubbing that makes every word out of his mouth a hoot.  Together, the rebels thwart Draculon’s right-hand man, The Baron (writer Gillespie) and escape to the wastelands surrounding the city, where they plan their final attack on the demonic stronghold.  Each performance is spot-on, the actors pressing tongues firmly against cheeks and running with it.  The stand-out, however, is Gillespie’s Baron.  It is an interpretation of sheer comedic brilliance, and one of the funniest I’ve had the pleasure of witnessing in quite a spell.  Easily flustered and self-doubting, he steals every moment he’s in, and his awkward attempts to woo Mina make for some of the movie’s best scenes.

The overall look of the production is a marvel unto itself.  Utilizing stylized green screen technology in much the same way Robert Rodriguez did for “Sin City” and “Shark Boy and Lava Girl,” even the slower moments are visually arresting.  The colors, enhanced and obnoxiously vibrant, pop off the screen.  Computer generated backgrounds, bearing more than a passing resemblance to the design of Los Angeles in “Blade Runner,” still maintain their own distinct style.  The artful blend of digital, stop-motion and practical effects is a far cry from seamless, but that only adds to the charm, another attribute “Manborg” has in spades.  The demons’ make-up, though a bit too constricting to the actors, suits the purpose and detracts not from the proceedings.  The effects, as well as nearly all technical duties involved, were engineered and created by Kostanski, Gillespie and Brooks.  Like I said, talented as hell. 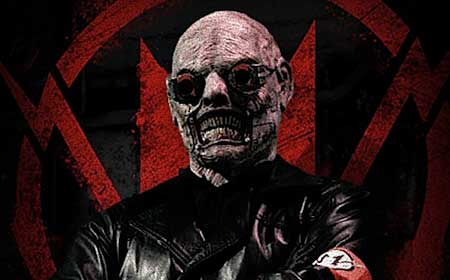 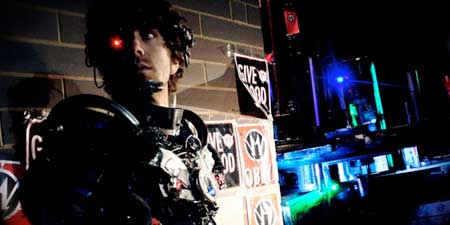 The only true quibble (and it is nothing more than that, a minor complaint) I have with “Manborg” is the extremely brief run time.  This will most likely be the only instance in which I ever wage this particular grievance.  Though possibly a result of budgetary restrictions, a few sequences are rushed to the point of incoherency.  This may be part of the mad master plan however, as the pacing is nothing short of breakneck.  “Manborg” doesn’t let up for longer than a minute, approaching utter chaos but never stepping (too far) over the line.  Apparently, there’s a theatrical version that clocks in at 75 minutes, which I’d like to see.

In my youth, the old man had a penchant for shunning big Hollywood movies that dominated the New Releases section at the local video dive and picking some low-budget oddity we’d never heard of, searching for that “diamond in the rough.”  Like those I view as your humble servant here at HorrorNews, there was a lot of rough and very few diamonds.  However, to this day I still get that same nerdy thrill whenever I stumble upon one.   “Manborg” needs to be seen by anyone with a love of the genre.  “Manborg” should be taught to budding independent film makers in courses across the globe.  “Manborg” is a diamond.  Bravo. 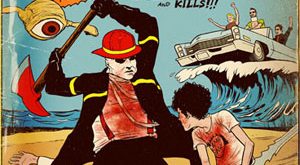 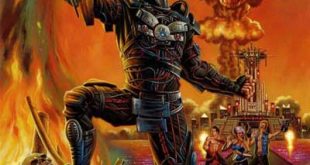