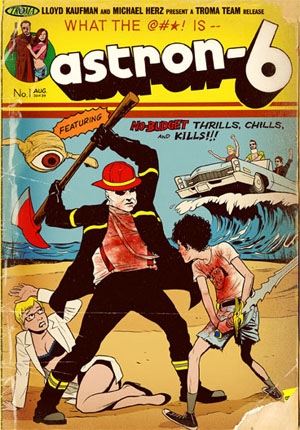 Astron-6 is the brainchild of these five iconoclastic, multi-media artists who share a fascination with the mechanics of fear and laughter. They subvert the expectations of the seasoned viewer with the nightmarish and absurd. Their imagery and recurring themes are often torn from the childhood of the irony-craving, internet savvy Generations X and Y. That is, they often lampoon genre films of the 1980s.

When Lloyd Kaufman hands you a DVD and asks you to review the film, you not only jump to it, but you also almost feel obligated to give it a good review. So after giving it a few days, I sat down to watch “Astron-6”. Much to my surprise, I found out that this 2-disc set really isn’t a film at all. It is a collection of shorts from Astron-6, who are five friends from Canada with a love for film. This is mostly a mixed bag but what each short does show is that these guys are extremely talented and have a wicked sense of humor. If you’re a Troma fan, then you may have heard about their upcoming feature “Father’s Day”. These are the guys behind that film. Each of them take turns writing, directing, and acting in these shorts. Some are better than others. Some bored me, others had me in hysterics. Since this is a short film collection, if you don’t like one, maybe you should try the next one.

This is the first time I have had to review a short film collection like this and I’m not sure how I should go about it. I don’t want to go through every one of the films on the disc but I will touch upon a few of them in order to give you an idea of their tone and what these guys are about. When their logo appears at the beginning of the shorts, it immediately evokes a feeling of nostalgia for the films of the 80’s. There is a bit of video tracking that clears itself up as the logo plays along. Their shorts range anywhere from thirty to just a couple of minutes long. Each one has its own unique tone and one is never the same as the next.

The films that run close to thirty minutes may have been the funniest and most entertaining. “Cool Guys”, “H.I.Z.” and “Punch Out” were the ones that really made me stop and think about how cool these guys really are. The films mix everything from John Hughes to Friday the 13th, and set everything in the 80’s. It all feels authentically 80’s and at the same time they have their own unique voice and sense of humor shine through. Then there is the “Heart of Karl”, which is a complete 360 and a much more serious film where Max (Conor Sweeney) has to try and lead his brother Karl (Matthew Kennedy) through a disturbing world to safety. You have to know that these are really low budget affairs but visually, I just loved the look of this film. Another highlight for me is the music video for the song “Haunted” by Darkhouse. The video is directed by group member Adam Brooks. It’s a catchy song and the overall look of the video works.

The first disc contains the majority of what I felt were gems, including the ones that I mentioned above as well as an extended preview of their upcoming feature film “Father’s Day”, which looks absolutely insane and I personally cannot wait to see it. The second disc contains some solid work as well including, “Fireman” and “Siam I Am”. The only film that I really just didn’t get in to was one titled “Nobodies”.

The group Astron-6 is comprised of Adam Brooks, Conor Sweeney, Matthew Kennedy, Jeremy Gillespie, and Steven Kostanski. If ever a group of people were meant to work together, it’s these five cats. This is a disc well worth seeking out and much fun can be had with the films that are contained within. I would say that they have mastered the short film, the real test will be to see how their style and humor translates over to a feature film. With a strong influence from films of the 80’s, as well as grindhouse fare, and even a little Cronenberg, Astron-6 could be the next cult sensation. 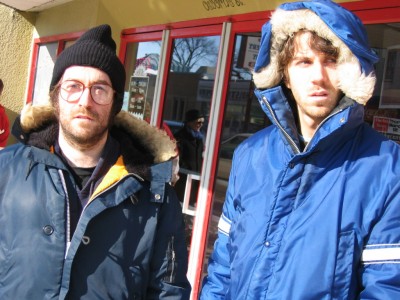