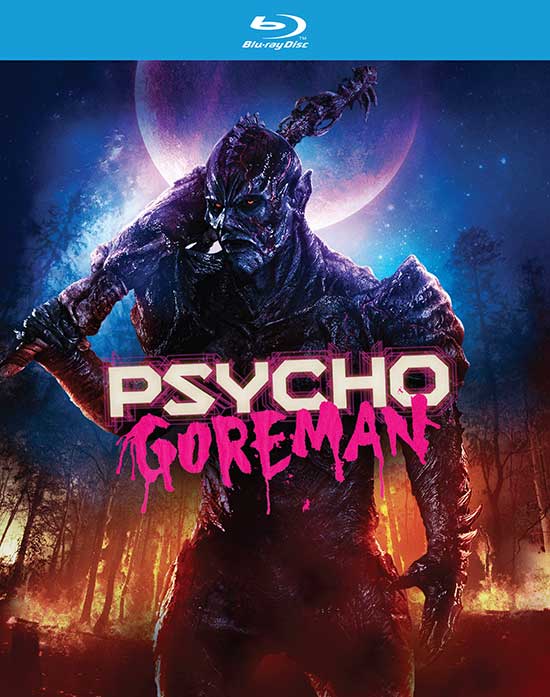 In PG: PSYCHO GOREMAN, siblings Mimi and Luke unwittingly resurrect an ancient alien overlord who was entombed on Earth millions of years ago after a failed attempt to destroy the universe. They nickname the evil creature Psycho Goreman (or PG for short) and use the magical amulet they discovered to force him to obey their childish whims. It isn’t long before PG’s reappearance draws the attention of intergalactic friends and foes from across the cosmos and a rogues’ gallery of alien combatants converges in small-town suburbia to battle for the fate of the galaxy.

Directed and written by Steven Kostanski, Psycho Goreman is one movie I kind of wish I could say that I grew up watching.

We meet Mimi (Nita-Josee Hanna) and her brother Luke (Owen Myre) are playing crazy ball in the backyard. (which is basically Mimi’s version of dodgeball.) Mimi has Luke digging a giant hole in the yard. They find a rad neon pink gem that reminded me of the bloodstone from Subspecies. (Watch Subspecies… if you haven’t seen it.)

Mimi and Luke have to go to bed. Mimi and Luke’s dad gives a speech about humans being monsters. Isn’t that something, it’s usually scarier too when the humans are the monsters. We meet a bunch of gentlemen who are getting in all sorts of mischief. They have an encounter with Psycho Goreman (PG) (Matthew Ninaber) who is this bad ass, gnarly intergalatic creature that Luke and Mimi may have brought to life.

Steven Vlahos is the voice of Psycho Goreman (PG). Psycho Goreman is a bit nostalgic. It sort of brings a little bit of the eighties back. (I didn’t get to dig a hole in my yard and unearth a super cool creature. I’m slightly bummed about this now.) This intergalactic creature isn’t playing around. Psycho Goreman’s quotes and warlord demeanor is wild. Luke and Mimi go looking for him and Mimi isn’t scared of nothing.

Psycho Goreman explains what the neon gem does. In the meantime, the effects and make-up are great. Mimi and Luke have control of him now and they also try to name him. They go through a variety of names. They come up with Psycho Goreman or PG for short. 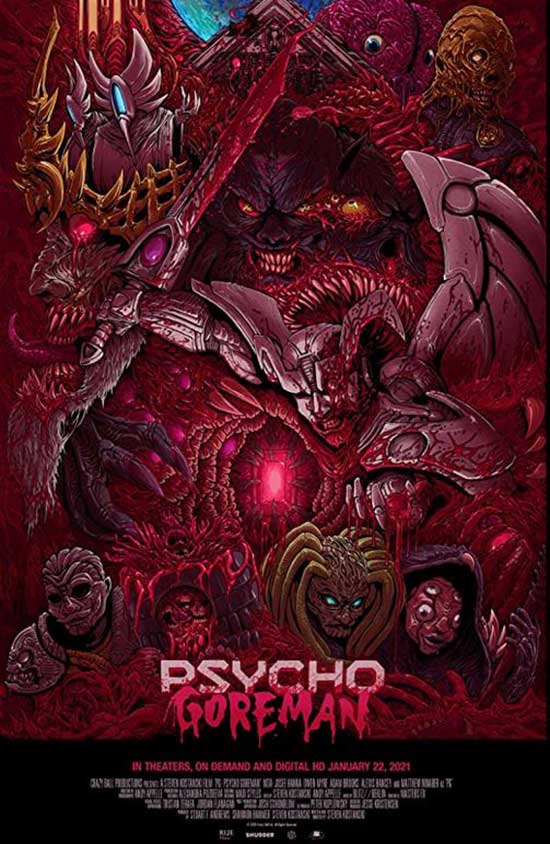 We meet a group of creatures that range from an awesome sort of Transformers mix and a talking brain with eyes. The effects and the various designs are great. Kostanski did a good job with creating this insane galaxy that Psycho Goreman comes from.  Mimi wants to turn PG into some kind of sideshow. She brings a friend to meet PG. It doesn’t go well but PG tells his story. Nita-Josee Hanna does a good job of playing Mimi as sort of obnoxious but brave.

The bring PG a TV. That wasn’t a good idea, PG uses that to contact his galaxy. There are some funny moments. Mimi and Luke’s parents meet PG. Okay, so now they have a band with an intergalactic warlord playing the drums. Slayer meet… Mr. Bungle, too late that’s already happened. PG may have turned their friend into a giant brain.

Luke is having a dream. He’s in a graveyard with dead coming back to life. It feels like a magical homage to George A. Romero. There is a grindhouse feeling with this movie. It’s campy and fun but also gritty. So, Mimi and Luke are walking around with PG and a police officer who now looks like he walked out of Troma film.

We get a few moments with more nostalgia from the eighties and nineties. I half expected He-Man and Shera to show up. The creatures vary from a washing machine thing that spits out blood, a wild Predator style creature that also looks like a tree. The movie has lot of heart to it. It’s definitely original. “What the frig”, indeed.

Psycho Goreman has heart. It’s a fun movie. There are a few lessons we might take in. The eighties and nineties were wild times. It was also the last of being able to go and rent movies from Blockbuster or Hollywood video. It nudges the heart and soul a bit. It’s not quite the same, or as adorable E.T. but PG dishes out some life lessons. Mimi and Luke battle good and evil. The artwork is beautiful, the practical effects were so appreciated. Thanks, Steven Kostanski, for making Psyscho Goreman (PG).

The DVD has a bunch of great special features including: Director commentary, interviews with the cast and crew, fight choreography, the music of PG, behind the scenes featurettes, concept art gallery, PG Psycho Goreman trading cards gallery, behind the scenes photo gallery, and more.