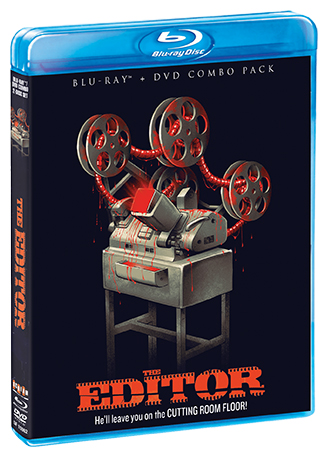 A one-time (and now one-handed) master film editor toiling in the cinematic sweatshops of 1970s Italy becomes the prime suspect in a series of brutal murders, in this loving tribute to/parody of the gory giallo thrillers of Mario Bava and Dario Argento.

Astron-6 is a genre outfit known for their attention to detail, skewed sense of humour and homages to by-gone film eras. Their first (awesome) feature Manborg paid homage to the B-grade action/sci-fi movies of the 80s, whilst their second feature, Father’s Day lampooned 70s exploitation and revenge cinema. Both films remained faithful to the genre(s) they were sending-up, playing as serious as a film of this could whilst littered with humour and nods in every direction.

The third feature from Astron-6, The Editor, is a tribute to Italian Giallo, Poliziotteschi and spaghetti horror films of the 60s-70s and a genre fan’s wet dream. Painstakingly faithful to the aforementioned genres in every way, from the score, cinematography, (over)acting and costumes, The Editor lampoons the genres while remaining respectful at the same time, never being a complete spoof though littered with nonsensical dialog and visual gags galore. The Editor is an impressive piece of film in this regard.

The Editor is story about Rey Ciso. A former prodigious film editor, Rey lost the fingers on his right hand after being overworked and over-stressed. Now with a wooden fingered glove, Rey cuts film for shlock horrors and trash pulp, much to the dismay of his wife Josephine, a now washed-up actress who pays little attention to Rey and creams for other men. Rey’s sweet and innocent assistant, Bella is the only glimmer of beauty in Rey’s otherwise shitty existence but when the cast and crew of the latest film Rey edits begin dying in ever increasingly violent and gory ways, the body count, nudity and non sequiturs rise as Rey is fingered as the prime suspect by Inspector Porfiry, a newbie on the beat trying to prove his worth and find his wife attractive again after she was blinded by fright. Will Porfiry find the vital evidence to link Rey to the string of murders, or will Rey prove his innocence before it’s too late?

I really appreciated the way The Editor remained faithful in almost every little detail. The colours used, the zooming in, the over-dubbed voices which were every slightly out of synch, the gore, the knife POV and of course, gloves, this film is a technical feat that was meticulous in detail. Massive kudos to Astron for what they’ve done.

The Editor is not for everyone . This is genre in every conceivable way. The obvious target audience are those who enjoy the Giallo films it sends up but also have a twisted sense of humour. Many a gag lampoons the genres, from the misogynistic attitude that women need to be slapped to be kept in-line and happy (even the woman agree to this in the film), to the over sexualised nature, gore and visual gags that play in the background of a number of scenes; there is a lot going on in this witty, over-the-top movie. Lovers of the genres will enjoy spotting the references and nods to many films The Editor winks to. Those who’ve never watched a Giallo and think Dario Argento is a venereal disease will lose a lot of the humour and references the film crams in, however that’s not to say they won’t find it enjoyable though. At the very least it’s an experience you should find entertaining on some level. 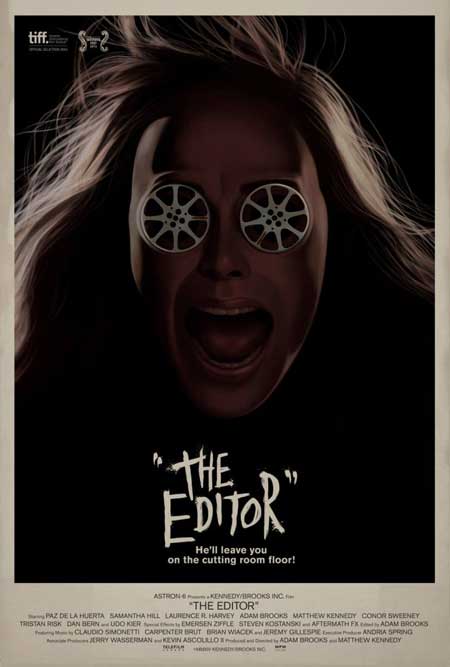 For me, I’m more a fan of Spaghetti Horrors over Giallo or Poliziotteschi films and though I found all the nods and winks entertaining, the jokes did wear thin after a while as repetition got the better of the script. The story itself, if you remove the gloss of technical feats and comedy, is weak too, with a third act that is kind of forced into action rather than organically eventuating. An argument could be that Astron-6 were trying to remain, really, really faithful to the genres, but I find that invalid. The story could have easily been stronger while still remaining faithful. It’s like the writers ran out of steam in the final stretch.

Would I watch this again? Though I found it entertaining, it doesn’t entice me to want to watch it again.

Would I recommend this to anyone? As stated earlier, if you love those old school Italian films, you will definitely have fun with The Editor and you should make an effort to watch this. For those who’ve never seen those films before, I still say give it a shot, but maybe not with as much haste, though it’s an experience worth the view.

The Editor is now available from Shout Factory on bluray