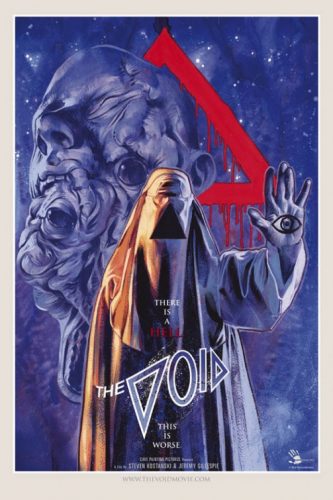 In the middle of a routine patrol, officer Daniel Carter happens upon a blood-soaked figure limping down a deserted stretch of road. He rushes the young man to a nearby rural hospital staffed by a skeleton crew, only to discover that patients and personnel are transforming into something inhuman. As the horror intensifies, Carter leads the other survivors on a hellish voyage into the subterranean depths of the hospital in a desperate bid to end the nightmare before it’s too late.

Open on a chaotic scene: it’s late at night, and a man and a woman are running frantically out of a house, clearly scared of something. Two guys appear through the doorway after them, both carrying guns. As the fleeing couple heads for the nearby woods, a gunshot rings out, and the girl falls to the ground, critically wounded. Her partner in the escape continues to the cover of the trees, then watches in horror as their pursuers drench her body in gasoline, set her on fire, and drive off in hopes of finding their other target: him. Cut to an ominous white-cloaked figure, a mysterious black triangle adorning its face, watching from the distance. This is how to start a horror movie, packed with action and mystery and a dark sense of foreboding that is already warning us, within the first two minutes, that everything is not going to be even close to okay. This is how The Void begins, and it only gets crazier as it continues.

There has been quite an early buzz around Jeremy Gillespie and Steven Kostanski’s newest collaborative effort. While both are members of the filmmaking team known as Astron-6 (see also Manborg, Father’s Day, and The Editor), The Void is not an Astron-6 production. This is probably most noticeable in the difference in overall tone – while movies like Father’s Day and the like deal with dark material, they do so with a bit of quirk and absurdity to them. However, while there might be a chuckle or two along the way, The Void starts out dark and brutal and only gets more so as it goes on. So there’s a good reason lots of people are talking about this new horror movie: it’s creepy.

Our main story begins when Officer Daniel Carter (The Conspiracy, The Last Will and Testament of Rosalind Leigh) comes across the guy who escaped in the intro, James (Evan Stern), crawling down the road. He looks bad, beat up, maybe even sick, so Carter takes him to the closest hospital, where we meet a good number of our cast: medical student Kim (Ellen Wong, Scott Pilgrim vs the World, Silent Night), nurse Beverly (Stephanie Belding, Watchmen), Dr. Powell (Kenneth Walsh, The Exorcism of Emily Rose), and nurse Allison (Kathleen Munroe), who also happens to be Carter’s ex. We already know something is wrong, but it gets even worse when Carter walks in on Beverly killing a patient, stabbing a knife into his eye, before peeling her own face off. When she attacks the officer, he is forced to shoot her. And then things really get crazy.

The Void is a movie that knows how to set a mood and draw its audience in. The hospital is on the verge of closing down after a fire wrecked a large section of it, and so it is falling apart, lights are flickering, some rooms are crumbling, and it is all but vacant of people – the perfect setting for a scary movie, think along the lines of Anthony DiBlasi’s The Last Shift, but in a hospital instead of a police station. We’re in the middle of nowhere, in the middle of the night, with mysterious things happening, and when the recently dead start coming back to life, albeit with newly-sprouted tentacles and a penchant for removing their own skin, combined with the guys with the guns from the beginning barging in and attacking, talking about the end and insisting that James needs to be killed, we realize we are even less certain as to what is happening and who we can trust. It’s this sense of paranoia and claustrophobia that really comes through strong here, especially when our “good guys” are getting killed off one by one and we realize the place is suddenly surrounded by dozens of the white-cloaked people. 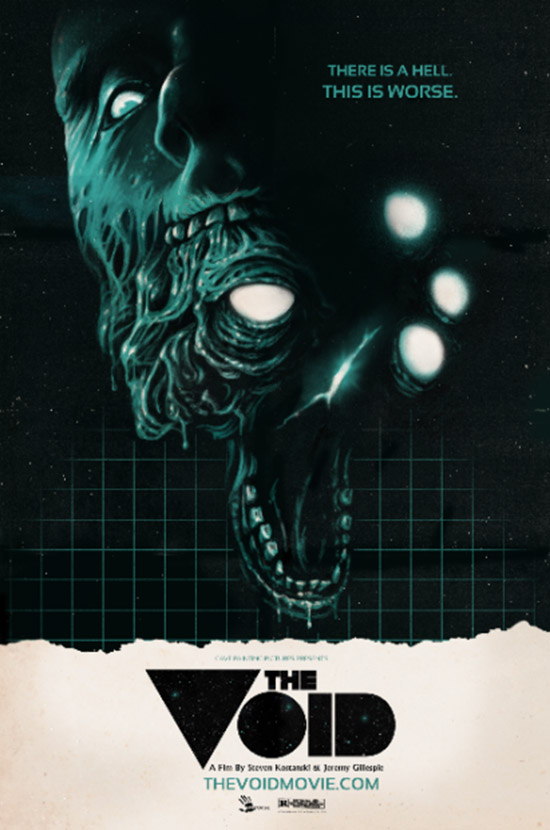 It is fairly evident that the filmmakers’ influences come from a variety of places, but not in that “hit you over the head with a list of movies we like” kind of way. This film has that good feeling we often associate with 80s horror, not because they’re trying to make it artificially resemble that, but because they succeed in setting the atmosphere early. We can’t help but think of other movies with the hospital setting, movies like Halloween II or The Exorcist III. In fact, there is a strong John Carpenter vibe throughout, from the trapped-in feel of Assault on Precinct 13 to the distrust and fear of The Thing. 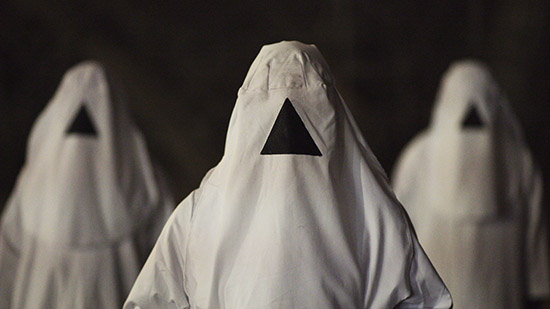 Toss in a bit of H.P. Lovecraft mythos and the occult, and perhaps a touch of Hellraiser, and here’s a movie that really stands out, one packed with monsters and cults and evil, a refreshingly original story that proves that there are still new ideas out there while also managing to bring its audience to the threshold of hell.

In case I haven’t made it clear, The Void is a fantastic new horror movie. It is creepy, it is dark, it takes familiar concepts and combines them into a new and original story. The acting is good, the effects are great, the evil characters are haunting, and the story ultimately goes in a direction that is not only unexpected but that also manages to up the terror factor. I could name off a whole long list of “for fans of…” references, even more than I already have here, but instead I’ll just say this: this movie is for anyone who loves original horror movies.