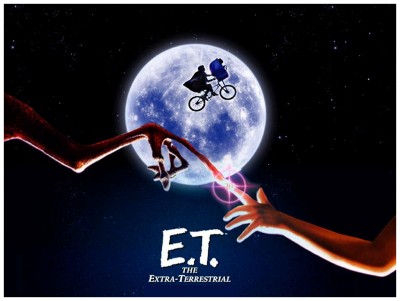 SYNOPSIS:
“While visiting the Earth at night, a group of alien botanists is discovered and disturbed by an approaching human task force. Because of the more than hasty take-off, one of the visitors is left behind. The little alien finds himself all alone on a very strange planet. Fortunately, the extra-terrestrial soon finds a friend and emotional companion in ten-year-old Elliott, who discovered him looking for food in his family’s garden shed. While E.T. slowly gets acquainted with Elliott’s brother Michael, his sister Gertie as well as with Earth customs, members of the task force work day and night to track down the whereabouts of Earth’s first visitor from outer space. The wish to go home again is strong in E.T. and after being able to communicate with Elliott and the others, E.T. starts building an improvised device to send a message home for his folks to come and pick him up. But before long, E.T. gets seriously sick, and because of his special connection to Elliott, the young boy suffers, too. The situation gets critical when the task force finally intervenes. By then, all help may already be too late, and there’s no alien spaceship in sight.” (courtesy IMDB)

REVIEW:
Steven Spielberg‘s vision of childhood – innocent and open, unable to distinguish between fantasy and reality, with triumphs and traumas which adults find incomprehensible – can be found in much of his work. But it had its fullest, most plangent treatment in a comparatively modest little film called E.T. The Extra-Terrestrial (1982) which became the most popular film ever made within a few weeks of its release. Spielberg, not a conscious intellectual, would probably be sarcastic about comparisons with the poet William Wordsworth but, for both, the world of childhood is central to their vision of adult life. Wordsworth quite simply saw children as being closer to God than is possible for grown-ups, and the actual process of growing up he saw as a slow corruption and darkening of their vision. To be an adult is to have lost not just one’s innocence but also one’s joy. Wordsworth called it The Vision Splendid: “At length the man perceives it die away, and fade into the light of common day.” To grow up is to become confined: “Shades of the prison-house begin to close, upon the growing boy.” 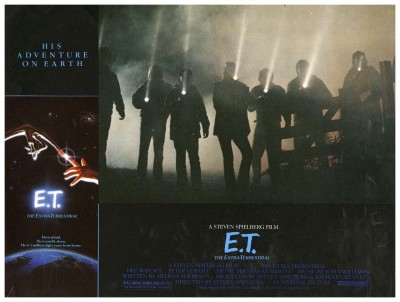 Spielberg’s genius is to teach this lesson over again, but to render it acceptable by giving it a commonplace twentieth century context where children are not just vessels of the pristine light, but cheeky kids. Just as Close Encounters Of The Third Kind (1977) restructures an ancient fairy-tale, so E.T. The Extra-Terrestrial restructures Peter Pan, William Wordsworth and – the most daring stroke of all – the death and resurrection of Jesus Christ. E.T. is himself a child, a lost alien whose family has accidentally deserted him. He makes friends with Elliott (Henry Thomas) who is himself lonely and fatherless. E.T. is the secret magic friend of childhood, but the adult world intrudes and E.T. finally dies. It is not a direct crucifixion – nobody actually ‘kills’ him – but the nature of our fallen world has caused him to become sick. Fortunately, he rises from the dead and, in a sequence of transcendent joy, he teaches the children how to fly like so many Peter Pans on bicycles and soar to freedom high above the repressions of the adult world. 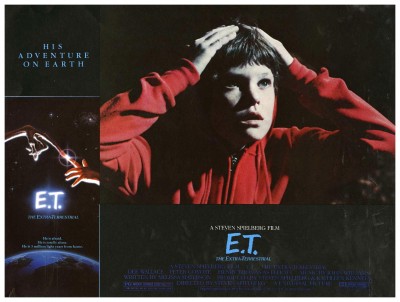 In the thrilling opening E.T. (a soft-eyed, charming, ungainly, pleasantly reptilian creature designed by Carlo Rambaldi) is studying earth plant life in the woods near a Californian suburb when he is accidentally left behind by his spaceship, which leaves hurriedly to avoid detection. While government agents and scientists search for him, he wisely hides out and is befriended by a nice ten-year-old boy. E.T. and Elliott have an immediate kinship, and the boy soon discovers he also shares the alien’s feelings. E.T. also becomes a special friend to Elliott’s older brother Michael (Robert MacNaughton) and younger sister Gertie (Drew Barrymore), but the children’s recently divorced mother (Dee Wallace) is too distracted to realise that something weird is going on in Elliott’s room. 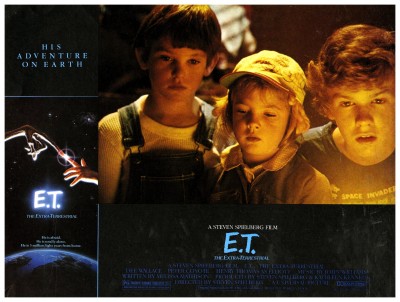 The love blossoms between the kids and E.T. but the fragile creature becomes sickly and longs to return home, so the film becomes a twist on The Wizard Of Oz (1939): three youngsters help an adult return to his own world – there’s no place like home. In truth, the film has far more sympathy and understanding of children than The Wizard Of Oz, a celebration of youth and innocence – unlike The Wizard Of Oz, these children refuse to grow up. For many, the key scene is when the scientist (Peter Coyote) tells Elliott that he’s been dreaming of meeting an alien since he was a little boy, but we recognise that when he was a boy he wanted to play with an alien but, as an adult, all he wants to do is perform experiments on him. 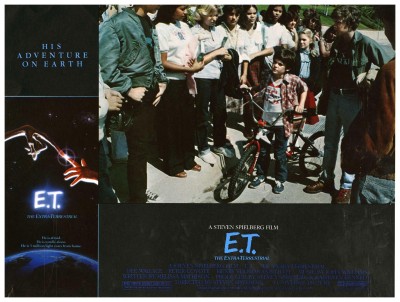 The film has suspense, wit, magical special effects and numerous scenes that have etched themselves into the memories of moviegoers everywhere. Though Spielberg occasionally manipulates us into shedding tears, the film is genuinely sweet. E.T. is a wonderful creation with universal appeal, and kids respond to him with such affection because he truly satisfies their need for the so-called ‘imaginary playmate’ established by psychiatrist Ian Stevenson, the ideal friend for all kids, especially those who don’t have two parents always there, who wish their stuffed toys could hug them back. Adults, of course, are also taken with E.T. – when he dons a bathrobe and waddles through the house, he may remind you of your favourite quirkiest visiting relative. It is all enormously well-done, and viewers who resist the undoubted charm of the film have the embarrassment of enduring accusations of hard-heartedness from the tearful majority. 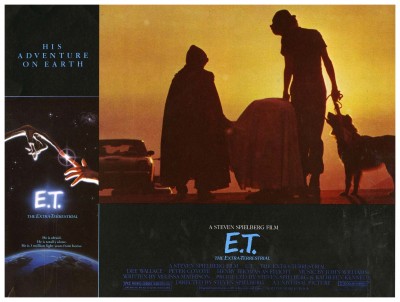 Not to be overlooked when trying to figure out the amazing success of the film is the performance of Henry Thomas. In a very difficult role he is so appealing that we gladly accept him as our surrogate and allow him to fulfill our dream of meeting the perfect alien. The adult world is almost always seen from a child’s point-of-view, with the emphasis on legs and bodies with the faces too high up to be visible. The greatest strength of E.T. would have to be its fantastic set-up. One of Spielberg’s greatest gifts was his uncanny ability to create a grungy and realistic suburban environment that would be unsettled by supernatural disruptions, creating an escapist and modern form of cinema that was identifiably his own. The dysfunctional family environment that Spielberg creates in the initial scenes gives the film a weight and emotional pull that few children’s films these days can match. 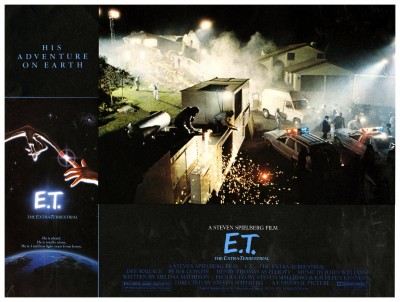 For the twentieth anniversary DVD re-release in 2002, Spielberg wanted to update the effects: “I didn’t want to mess with it too much. I had him run in a more realistic way, which I think looks a lot better, and there were certain things we had to change that just wouldn’t be suitable now. I changed the guns to walkie-talkies and we had to change the dialogue when Elliott’s mother says to the kids when they go out for Halloween, to not go out looking like a terrorist.” The majority of E.T.’s acting was done by Felix Silla (Cousin Itt of The Addams Family and Twiki of Buck Rogers In The 25th Century) in a rubber suit, but the latex mask limited the number of facial expressions. All-in-all Spielberg updated 110 shots over a six month period, including matte paintings, flying bicycles, the spaceship, and E.T. himself. In fact the DVD re-release has a two-minute introduction by Spielberg in which he explains how he touched up the film and how proud of it he still is some two decades later. 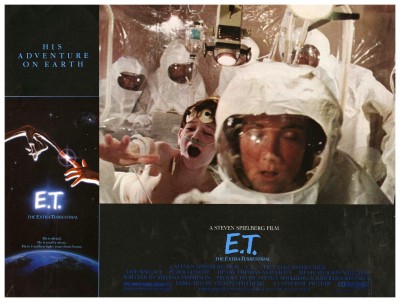 Other special features include a fifty-minute documentary entitled Evolution And Creation Of E.T. starring all the major cast and crew. Spielberg reiterates some of the comments made in his brief introduction and goes into greater detail on the meaning of the film, particularly in regards to how personal it was for him. The cast and crew also discuss its meaning, its deeper subtext, and why the film has resonated with such a large audience. The development of the E.T. creature is also discussed as well as the digital modifications for the special twentieth anniversary edition re-release that a modest Spielberg describes as being “Like an artist touching up a masterpiece, making it better.” The Reunion is seventeen minutes of thoughts and recollections by Spielberg and his cast especially made for the re-issue. The profound impact of the film on the actors is highlighted, especially considering how young the leads were and the effect it had on their careers…or not, as the case may be. 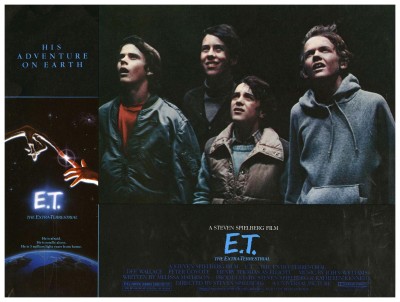 The Music Of John Williams is a ten-minute profile and interview with the legendary composer renowned for his scores for virtually every Hollywood blockbuster known to mankind. The Twentieth Anniversary Premiere is an eighteen-minute behind-the-scenes look at the debut of the re-release, which is quite interesting as it basically shows the remarkable job that was done for the premiere that included the film being digitally shown at the Shrine Auditorium in Hollywood with John Williams and the Los Angeles Philharmonic Orchestra playing the score live. There’s an animated guide to our solar system narrated by a raspy bong-damaged voiceover imitating E.T. as well as pre-production designs by Ed Verreaux, Carlo Rambaldi and Ralph McQuarrie, production stills, marketing, trailers and an internet-assisted DVD-ROM component that includes screensavers, downloads, trivia and some cute games that are far better than the original Atari E.T. game from three decades ago. 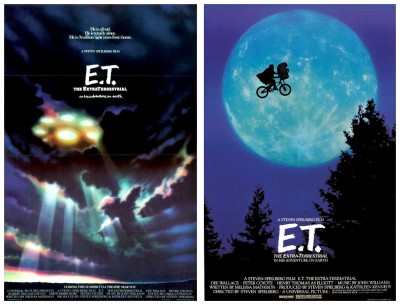 Steven Spielberg‘s technical expertise – combined with his seldom erring instinct for mythologies that keep their power in the secular world – has worked miracles both commercially and aesthetically for almost half a century now and is still going strong, with at least a dozen new projects currently in pre-production. It would be no surprise at all if his future accomplishments were even greater than those in his past, for he is a thoughtful, extremely talented man and tries terribly hard to remain true to his vision. It’s with this thought in mind I’ll ask you to please join me again next week to have your innocence violated beyond description while I force you to submit to the horrors of…Horror News! Toodles!