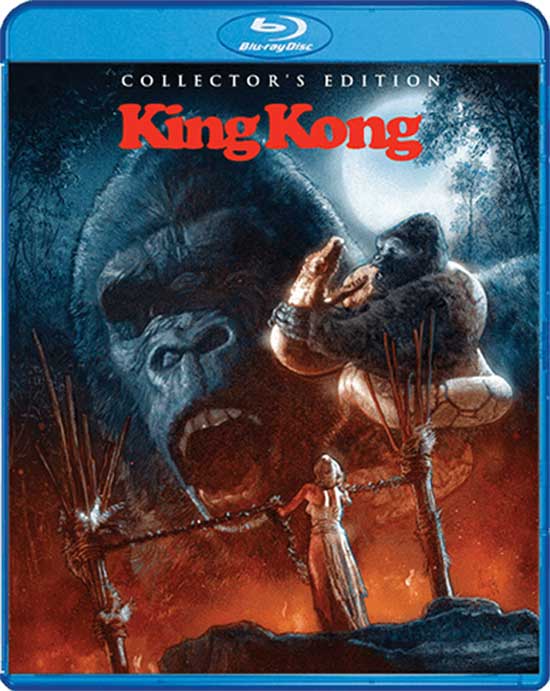 “The owner of the oil company Petrox Corporation, Fred Wilson, invests all his possessions searching oil in an unexplored island. The vessel leaves Surubaya, in Indonesia, with the stowaway Jack Prescott, who wants to protect an ape called Kong. While traveling, they find the castaway Dwan in the middle of nowhere in a rescue boat in the ocean and bring her on board. The group finds that the island is inhabited and the local natives worship a huge gorilla called Kong. They abduct Dwan to offer her in a sacrifice to Kong. The crew hikes into the jungle trying to rescue Dwan. King Kong falls in love with Dwan and protects her against a huge serpent. When Fred finds that the oil in the island is not ready for exploitation, he decides to capture Kong and bring him to New York for exhibition. In the middle of a show, King Kong escapes, bringing panic to the locals.”

With the success of Jaws (1975) a number of filmmakers quickly rushed their own ‘monster movies’ into production, but one producer, Dino De Laurentiis, had the clever idea of remaking the most famous monster movie of them all – King Kong (1976). Early in the film one of the characters points to the trail of damage left by the rampaging ape and asks his disbelieving companion: “What do you think did all that? A guy in a monkey suit?” 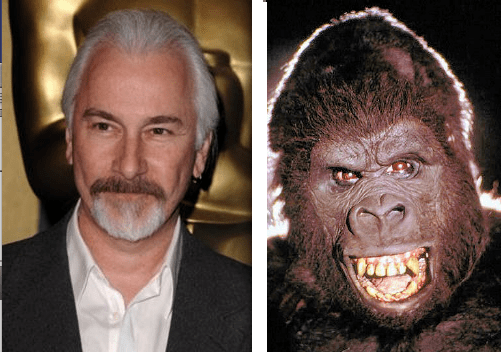 And here lies the rub, because Kong is just a guy in a monkey suit. The original King Kong (1933) represents the art of model animation at its peak, in fact the title is synonymous with the process, and much of the film’s attraction lies in seeing how skillfully Willis O’Brien and his team, by means of stop-motion photography, breathe life and personality into forty-five centimetres of metal, rubber and fur. However, Dino went ahead with his animation-less King Kong without a qualm, and even claimed that his film would surpass the original on a technical level because his giant ape would consist of a full-size model and thus appear more realistic. Even when the film was released, the accompanying publicity had the nerve to claim that “The Kong that looms on the screen is an ingenious forty-foot mechanical monster weighing six-and-a-half tons, able to cover fifteen feet in a single stride, electronically controlled by a complex hydraulic valve system that can roll his eyes and give sixteen separate movements to his hands.”

Yet the Kong we see on the screen is future makeup legend Rick Baker in an ape costume. The mechanical Kong does appear in the film but only very briefly – in the stadium sequence where the ape is unveiled in his cage and then breaks out – and it certainly didn’t make any fifteen-foot strides, although it did move its arms a bit. More importantly, it didn’t even match-up visually with Mr. Baker in his ape suit, the most obvious difference being in the shape of the shoulders and the overall colouring. Yet this mechanical monstrosity, designed by Italian effects man Carlo Rambaldi, supposedly cost millions of dollars to make. Several critics of the time accepted the publicity at face value and reviewed the film in a way that suggested the forty-foot (12.2 metres) model was used throughout. 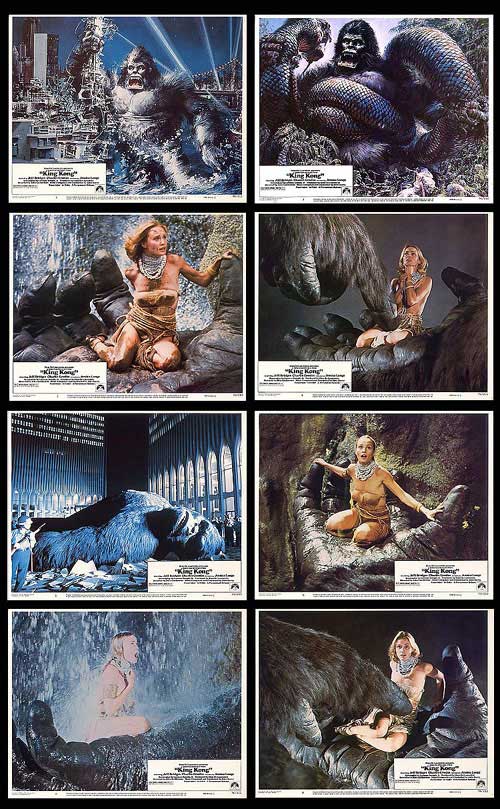 Much more effective were Kong’s full-size mechanical hands. Used in close-ups, they were a genuine engineering marvel and appear amazingly realistic in all their movements during the film. The optical effects supervised by Frank Van Der Veer, involving traveling mattes and split-screen work, are also of a high standard. Rick Baker does an adequate job inside the suit – commissioned and built within a few weeks when it was realised the full-size model was not going to work out – but the suit isn’t gorilla-like enough. It’s too slim and the legs are too long, with the result that sometimes Kong resembles a giant ape-man rather than a giant gorilla. Reputedly the original costume was more ape-like but the director, John Guillermin, insisted on it being altered for fear of losing audience identification with Kong. It certainly bears no resemblance to the Kong pictured on the film’s poster. 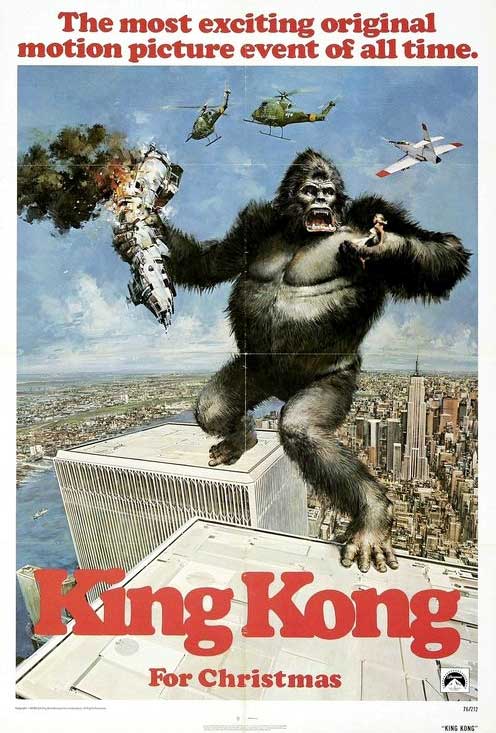 Apart from the special effects, how does it compare with the original? Not very well. On the credit side, Dino chose a director who is very good with big action subjects like The Blue Max (1966), The Bridge At Remagen (1969) and The Towering Inferno (1975). He also has a better script written by Lorenzo Semple Junior, who also wrote the very funny, very camp Batman television series in the sixties, Doc Savage (1975) and Flash Gordon (1980). Admittedly, no one on Earth writes quite like Semple, but the illusion of reality is central for lovers of fantastic fiction, they do not want to be constantly reminded that they are watching a fiction. Semple’s insistence on parody has the effect of making the stories seem unreal – I can’t help but wonder what his draft of Dino’s Dune (1984) looked like. Unfortunately, Semple’s overall story for King Kong is much weaker – gone are the set-pieces of the original involving Kong’s battles with the various prehistoric monsters that inhabit the island. All the remake can produce is one solitary – and very awkward-looking – giant snake.

Many of the visual thrills have been replaced by pathos, the emphasis being on tragedy rather than spectacle and excitement. The original King Kong had plenty of pathos too, but it wasn’t dwelt upon at the expense of the film’s action. The makers knew that if you allowed your audience to start taking seriously a love affair between a girl and a fifty-foot ape you’d be asking for trouble, but Dino and his team do make that mistake. They try to have it all ways – they want their film to be a spectacle, a parody, a tragedy and an allegory about the rape of the environment by big business, but in the end they don’t succeed properly in any of these categories.

Nevertheless the film is often entertaining. There are many funny lines and the cast is excellent, particularly Charles Grodin as Wilson, the cynical oil company executive who is determined to bring back the big one at all costs, even though it’s not exactly what his company had in mind. Rene Auberjonois is suitably off-beat as Bagley, Wilson’s scientific adviser, and Jeff Bridges is fine as Prescott, Kong’s rival for the girl. Newcomer Jessica Lange makes an adequate substitute for Fay Wray – she’s an updated version, of course, in skimpier costumes, more calculatingly ambitious, and with a tendency to talk about astrology, but she has the obvious streak of vulnerability that all true damsels-in-distress need to be successful, even though she does, at one point, accuse Kong of being a male chauvinist pig-ape.

As I stated in my review of the 1933 original, I’m sure I don’t have to mention the gazillion or so giant monster movies inspired by King Kong, and I certainly don’t have to mention the wonderfully self-indulgent Peter Jackson film – and I mean that in the nicest possible way – Sir Peter’s excellent 2005 version was also pure indulgence for me and most fans of the original 1933 masterpiece. But that’s another story for another time. Please join me next week when I have the opportunity to throw you another bone of contention and harrow you to the marrow with another blood-curdling excursion through the Public Domain for…Horror News! Toodles!