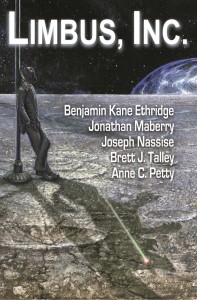 When Matthew Sellers, a struggling bookstore owner receives an unusual visit from a rambling stranger, his world seems to come undone. Ichabod Templeton claims to have a message of life and death consequence. A book in his possession is allegedly meant to be passed along to Sellers with sole intent to publish and distribute. Within the books contents are a collection of reports all centering around the infamous employment recruitment agency, Limbus Inc. Will the puzzled shop owner be able to decode the mystery contained within the pages or will he simply resign to skepticism concerning Limbus Inc?

The Slaughter Man: Written by Benjamin Kane Ethridge, The Sticker is a slaughter house labourer coping with a messy work scenario. While his marriage comes apart he takes drastic measures to fulfill his ultimate potential.

The Sacrifice: Written by Brett J. Talley, is a story about Ryan who struggles from Post-Traumatic Stress Disorder from time served in the military. Reluctantly he inquires with Limbus after watching a late night television advertisement. Mr. Dixson has been hired to find a kidnapped fourteen year old, Angela Edicott. Is there something beyond the surface Ryan is not seeing? As the layers are peeled back regarding the bizarre position, Ryan finds he may be suddenly terminated without notice.

One Job Too Many: Written by Joseph Nassise, is about Nate Benson, the product of inter-office racism. His manager, Southwick detests soldiers of the war and all they stand for. He fires him with severance pay at first available opportunity. Nate hears about Limbus Inc. from an old drinking buddy at the local watering hole. Once recruited, Nate is assigned one dangerous assignment after another. At last he’s commissioned to perform the ultimate inconceivable task. Will he see the project to the end or will his wits be enough to promote survival?

We Employ: Written by Anne C. Petty: Dallas is a down and out college drop out. A business card shows up in the unlikeliest of circumstances from Limbus Inc and after inquiring they hire him under the vocation of dog walker. Upon meeting his immediate superior Charlotte he soon learns his new job is out of this world.

Strip Search: Written by Jonathan Mayberry, Private detective Sam Hunter has been hired by Limbus Inc. to solve the case of seventeen murders. The victims were all teen aged girls. Hunter’s assignment is to find the missing Bambi before the cycle comes into full bloom. Will the PI blow the case wide open before it’s too late?

JournalStone Publishing continues to release one gripping, innovative release after another. This time around, a collection of short stories penned by some of today’s most talented contemporary authors of our genre fill the bill. The concept of a central theme surrounding an employment agency was conceived by co-contributor Anne C. Petty. The prologue and excerpts containing Sellers and Templeton were created by the immensely talented author of That Which Should Not Be and The Void, Brett J. Talley. Each tale is as equally creepy and compelling as the next. I’m amazed that very few, if any novels have been created in the horror genre about a recruitment agency. All the essential components and elements are already there, virtually screaming at the audience. Anyone who has faced a bout of unemployment or a means to an end knows full well the degree of vulnerability, near desperation that can very easily coincide. The terror elements are already churning and boiling on verge of erupting into full blown mayhem.

Each author from Ethridge to Nassise, from Petty to Mayberry is diverse in their expertise yet share a common bond. Their gift for conjuring a sense of intrigue, manifested with rising tension of the unknown and where our protagonists will ultimately end up is unprecedented in today’s contemporary horror fiction realm. We devour each of the authors’ words at break neck speed with an appetite of digesting more and more of what’s served up on the paranormal menu.

I’m reminded of the classic Twilight Zone series or perhaps One Step Beyond or the Outer Limits. The overall theme of this anthology would make an impressive blue print for a series of episodes in any of the fore-mentioned television shows. There is something very sinister, very curious about the institution of Limbus Inc, yet each of the characters are driven to explore further. This makes for highly suspenseful, Sci-Fi, action based thriller.

Perhaps what I like most about this collection is how each author is showcased for a mass audience whether they’re new to JournalStone or avid diehard fans such as yours truly. It provokes a sense of wonder in exploring other endeavors from each story teller and of course the many other captivating volumes available from JournalStone.

Whether you’re a fan of the paranormal, the unknown, simply appreciate a good solid collection of short stories or wish to expand your horizons on further works of any of these authors, I encourage you whole heartedly to apply to one, Limbus Inc.