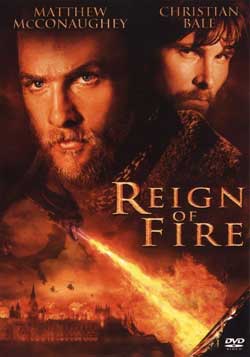 A brood of fire-breathing dragons emerges from the earth and begins setting fire to everything, establishing dominance over the planet.

Director Rob Bowman ( The X – Files, Elektra ) brings us “Reign of Fire”,  a post apocalyptic movie about man’s future co-existing with treacherous fire breathing dragons. Yeah, you read right. Dragons. The movie was released in 2002 with a trio of strong actors in Matthew McConaughey ( U-571 ), Gerard Butler ( 300 ) and Christian Bale ( The Prestige ). Beautiful Swedish Actress Izabella Scorupco ( Goldeneye ) also stars opposite Bale and company as Alex. 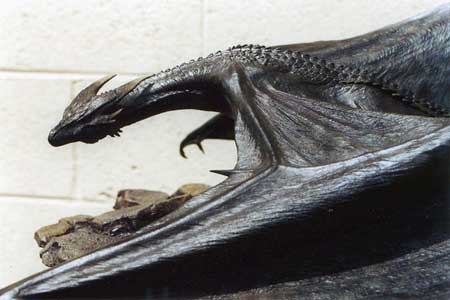 The movie, written by a few writers ( Gregg Chabot, Matt Greenberg ), takes place in the year 2010 when fire- breathing Dragons have been re-awakened and have taken over the entire planet by scorching everything in sight. Bowman and company make “Reign of Fire” a film more about the actual human struggle and not about a  90 minute over the top fantasy where dragons fly around burning the landscape. It was good move on the writer’s part to show the audience that a fantasy movie can be rooted in dynamic realism and yet convince us that these legendary creatures can exist and wreak havoc on our world and our hearts. Bowman delivers an imaginative tale of suspense and survival. The movie, ( shot in Ireland beautifully and with grit by DP Adrian Biddle who shot “Aliens: ), was unfortunately a victim of a somewhat mis-leading promotion campaign that emphasized the action/dragon quotient. Many were either surprised or disappointed that the movie is a drama about how we live with adversity in a seething environment with a disastrous backdrop. Even the movie’s poster showed a herd of flying dragons destroying London. Oops. Not so good. I must admit that I wasn’t too disappointed fortunately with the confusion. I found “Reign of Fire” to be entertaining, lively and a deeply compelling fable – like entry in the vast canon of dragon films. 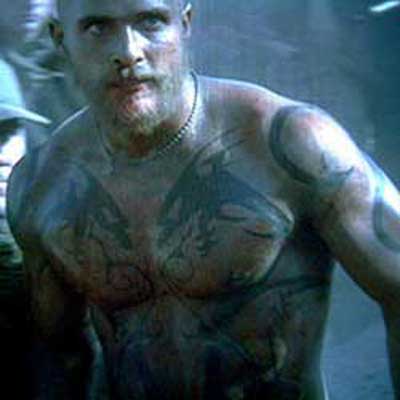 The elegant Alice Krige ( Star Trek: First Contact and Ghost Story ) stars as the mother of Bales’ character, Karen Abercromby. Karen is the head of an underground construction project going on in subterranean London. During the dig some workers inadvertently penetrate a large cavern that is filled with dormant dragons. They are awakened by the workers and they proceed to wake up with a fiery hunger. They incinerate the men working on the dig and start to rise to the surface. Young Quinn Abercromby ( Ben Thorton ) is almost killed while trying to shelter himself in a lift. His mother, Karen manages to save Quinn from the ascent of the monsters but not before she herself is pulverized to death. After the dragons are freed they begin to terrorize the planet.

They appear suddenly from the underground lair and fly to all the corners of the earth bringing total destruction. What I liked right away was Bowman’s decision to show the way the dragons attack the earth and it’s populace through news footage, talking heads, news reports and newspaper stories and clippings. It brought a very detailed realism to the story increasing it’s plausibility. I felt it was a nice touch and it was effective and bold. Bowman handled the opening with depth and paid homage to monster films of the past. Especially movies of the atomic era. There are theories being bounced around about the origins and purpose of the creatures but with nothing to actually help those that are left behind we have to resort to deadly methods to eradicate the dragons. By using nuclear weapons we make things go from bad to worse. 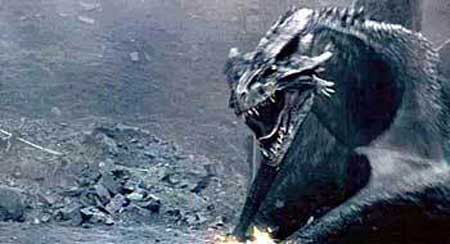 10 years later, in 2020, Quinn is now a man with a great responsibility. He leads a band of survivors in Northumberland. They reside in a craggy and desolate castle and are slowly starving to death. Quinn tries very devotedly to help his small and isolated community. While trying to harvest some tomatoes from a nearby farm they get attacked by a dragon killing the son of a friend of Quinn’s. Unfortunately many of the survivors are taking matters into their own hands because despite Quinn’s efforts they have lost some faith in his leadership. Bowman shows us how hard it is for Bale’s character with some well placed pauses that show just how frustrated Quinn can get while trying to help everyone to survive not only from hunger but from being targeted by the dragons. The film gets kicked up a peg when McConaughey and his crew, called The Kentucky Irregulars arrive at the castle. McConaughey plays Denton Van Zan who is a bald, bearded military bad ass that shows up with a helicopter and tank. A battle ensues between Van Zan and Quinn and his men. The confrontations displays that Van Zan, though a very tough hombre, does have a plan to dispatch the dragons once and for all. It is a sound plan but it causes Quinn to re-evaluate his purpose and his dedication to the survivors he leads. After heading out with Van Zan to go out on a mission they eventually destroy the one malicious dragon that attacked and killed Eddie’s son.

Bowman’s cast including the compelling Scorupco all play extremely well off of each other in this movie. They all play it straight and are at times a bit melodramatic but always credible. Scorupco is battle weary as is Gerard Butler’s Creedy. McConaughey is a hard and leathery stereotype but his portrayal is earnest. Bale manages very well here with the conflict and the resiliency that creates immediate sympathy for his character of Quinn. The real stars are the incredible locales, sets and of course the dragons. Fortunately for us, Bowman reveals very little at a time and each sequence that shows off the creatures is a delightfully vivid moment where we watch the movie take on a fantastic vibrancy. It is enhanced by some terrific exchanges between Bale and McConaughey. 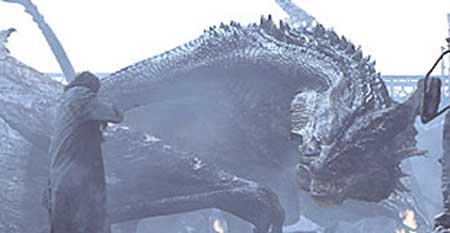 They are polar opposites yet need to set aside a huge chasm of differences in order to obtain the same goal. At one point Van Zan tells Quinn: “We have paid a terrible price, and now we’ve got a chance to make a difference. We will.” The dialog is strong, tough and Bowman shows us that his episodic television prowess at direction is a strength. He handles the budget well and he never cuts corners. “Reign of Fire” maintains a wild and vigorous pace that when in high gear proves to be fun displaying what makes the movie a high adventure. The movie’s last act is bold and Van Zan in all his “Quint” – like glory relishes in confronting the demons during a last stand with Quinn in a scorched London. Bowman fuses fantasy, drama and science to establish his film but it is the mythos and the fabled tapestry that makes “Reign of Fire” an incredibly fun fantasy movie. The CGI is sometimes a bit dodgy, dark and can be understated but Bowman’s FX team succeeds in meshing and blending the shots with a smart eye and attention. All together, the story, cast, locales and great action set pieces make “Reign of Fire” a pretty rousing dragon flick with a serious message and a hardcore troupe of characters to propel it. Oh yeah and the dragons are kick ass too. “Reign of Fire” is secure in the company of other likeable dragon movies like “Dragonslayer” and “Dragonheart” Enjoy!