The storage locker craze is, well… crazy. From Auction Hunters to Storage Wars there is simply not enough out there so obviously there should be a movie about them, right? Well – here it is in the form of Storage 24 which comes to us from across the pond. Storage 24 at first seems to be about the trials and tribulations of the 24 hour storage industry. It would have been stellar if the producers had been able to get some of these colorful personalities to guest spot in the movie. 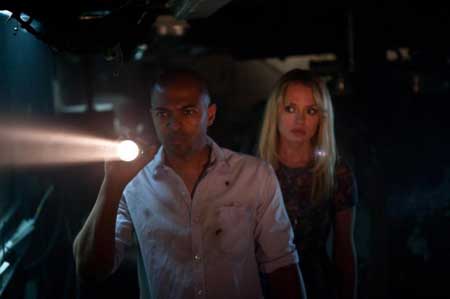 I will say that it is a crime that storage lockers have been left off of the horror movie radar. They are most definitely a unique location to set up a hellish romp. It really is mind bottling. They can store your crap… be a meth lab… an apartment… bug out shelter for the end of the world, a killer’s den of fun, and a great place to chase down a bevy of sorority girls if it is an indoor storage center. So many possibilities! 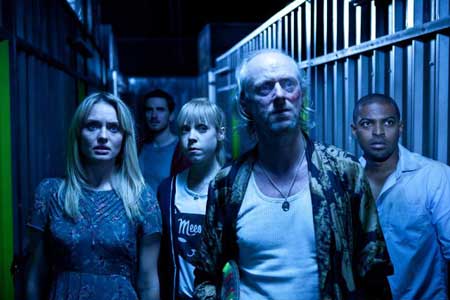 Many of the cast may not look familiar to American viewers unless you, like me, watch a lot of BBC television shows and movies from the UK that just do not get a release over here. If you are like me (and you really should be) then many of the cast will look familiar. This seemingly no name cast in this Universal Studios picture deliver in a way that is crisp and believable and honestly a breath of fresh air.

Storage 24 opens on a beautiful London day. The sky is blue – birds are singing… people are bitching about ex-girlfriends and getting their crap out of storage. As we start to get comfortable learning about these people and their issues as well as their commonalities we are rocked by an explosion. We don’t actually see it since we are inside the storage facility. It allows are brain to wander but as a woman and her dog approach the facility it happens… a plane engine! It crashes into a car and as she walks she discovers a large metal box. In the background cars are exploding… sirens blare and dark soot fills the sky. She turns back to the box… empty. This can only mean one thing… 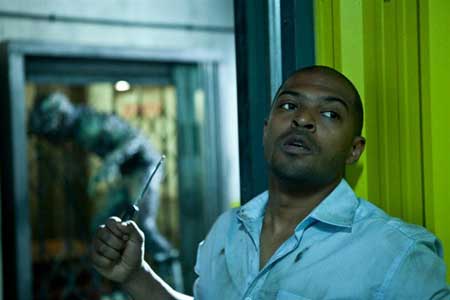 As with any creature feature there has to be a first, unsuspecting victim. The passerby’s cute puppy does what all stupid dogs do and that is runs into a dark building and gets gobbled up by who knows what. Like any good, upstanding dog owner she decides to go after her precious baby even though it is pretty obvious that he’s been someone or something else’s kibble. The series of explosions jolted the shoddy wiring of the storage center and caused those inside to get stuck inside the maze of storage containers. 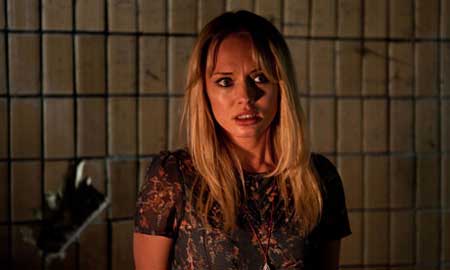 Storage 24 is dark and creepy with a cast of wonderfully real and unique characters. The film possesses very strong visuals and above bar performances by its talented cast. The lack of background music and useless errant sound evoke strong emotions when necessary both in fear and lighthearted moments. This is a combination that only the Brits can seem to meld together into an all-around great movie. 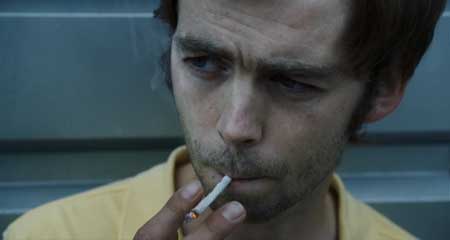 The problem with lower budget creature features is that they can easily become redundant, cheesy, and downright silly. Storage 24 doesn’t do that and hits on all cylinders from frame 1. I’m reluctant to comparison shop but if you liked Species, Mimic, or Relic then Storage 24 is right up your alley and deserves a watch. It’s a great ride with all the things you expect and love about creature features and none of the same boring crap. The creature isn’t in your face and as a result Storage 24 relies heavily on its gifted cast, great choice of set, excellent direction, and terrific use of close-up and mid shots to make you feel like part of the story.

5 out of 5 bloody German Shepherds… easily.

Storage 24 is now on bluray per Magnolia Films 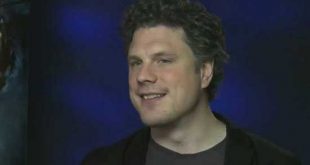