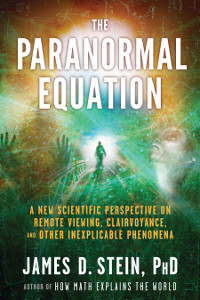 You can’t help but wonder with a firm sense of curiosity what entails within a book that is titled “Paranormal Equation”. For one, my experience in metaphysical books is that science and paranormal tend to not agree with each other. One group bases on fact, while the other requires a certain amount of spiritual embracing. Author James D. Stein, is no stranger to this conflict himself. You might say he is a welcome hybrid that loves science and mathematics and yet holds a deep regard for certain aspects of the metaphysics side of things.

This alone is worth investigation, but as Stein details his thoughts on this he fully notes the conflict of interest and that many will have issues with a stance that sways in the middle. The first chapter is devoted to Stein’s wrangling with the public opinion that is divided over these issues much like a presidential race. I thought it was a welcome attempt at comforting us and preparing us for his thoughts on the 2 subjects while educating us on the facts that he is fully aware of this gray line he wavers over.

The book begins by informing us on how some of these matters have become “silly” over the course of time. The fascination with numerology, astrology and what is really meant by the term supernatural. He covers TV, pentagrams, and the subject of crystals all of which are more in line with fiction than anything. It’s comforting to know that he “gets it” before taking us on his journey of the book’s purpose and his take on these subjects.

Stein states that the supernatural tends to recede with the advance of science. You might even say a large portion of this book takes this stance proving that over the years we have shifted beliefs and discoveries thus turning what was mystery and enigmatic into common ground. It is pointed out that technologies such as microwaves are invisible but yet we all tend to get what they do and how. This understanding is yet still allusive when it comes to spirits and supernatural elements that science cannot measure.

While many examples are stated, I believe the author is on to something that we tend to …forget. As we grow, as a culture and society, we change our perspective within the emergence of discovery. Stein goes on to talk about how ghosts and spirits have yet to be proven even with the technology at hand. I’m sure there are alot of TV networks out their that would cringe at that statement, seeing that ghost hunting has become so popular, but if you think about it, we really don’t have an overwhelming collection of evidence that is clearly been embraced by science.

While the book has moments that get “mathematical”, I also confess to having a hard time putting this down while reading. The book takes on a conversational tone that is very embraceable for readers. I think Stein is stating what we tend to know within ourselves. I was about halfway thru this book when I realized that while I found the book comfortable to read and interesting, that it also was becoming harder to review from a informative perspective.

Its true purpose lies within this conflict, argument and issue in how science struggles with certain elements. Moreso Stein takes most of the book to explain why and for what reasons. he even helps our understanding by stating how scientists and mathematicians approach issues, and what they cannot do without the proper means to test and conclude. While this might all seem ambiguous, it’s an impressive attempt at putting reason to a much debated issue. In summary, the book presents Stein’s perspective on where we’ve been and where we are going with this same issue.