Home | Cinema of the Cannibal God

Cinema of the Cannibal God

Cannibal films surprisingly come in many various guises but the majority of us horror fans think of one specific niche sub-genre made famous by (primarily) Italian film makers throughout the 1970s and 80s. Combining gore, adventure, xenophobia and sadly in some cases a dash of animal cruelty these films became notorious and their legend grew but were they actually any good and do they live up to the infamy and hype?

Set in undeveloped Jungle regions such as the Amazon or South East Asia, highlighting the advanced-primitive, civilized-uncivilized divide, and often employing the almost realistic feel of the previously popular mondo films, the aforementioned cannibals were always primitive natives with rituals so strange and barbaric, a case in point being the famous impaling in Deodato’s Cannibal Holocaust for the loss of virginity in one tribeswoman, and this perception allowed the directors to indulge in seemingly any form of gratuitous violence they could think of. One could even go as far as to say these were the beginnings of what we now know as torture P*rn, with the graphic violence set pieces obviously an influence on Eli Roth who would create the sub-genre with Hostel. 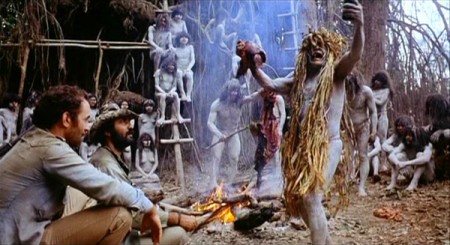 The birth of the primitive cannibal sub-genre can arguably be traced back to 1972 with Lenzi’s ‘The man from deep river’; starring Italian film stalwarts Ivan Rassimov and Me Me Lai and following the great Italian film tradition of replication, in this case it is the re-imagining of the 1970 Richard Harris western ‘A man called horse’. What this film (The man from deep river) did was prove that cinema audiences, although mainly non-Italian, were open to these kinds of films showcasing the exotic and strange cultures that regular people may never get to witness or experience.

Usually once the Italian movie industry find a style that works they go for it, as shown by the burst of spaghetti westerns, gialli and zombie movies throughout specific periods of the past 30-40 years, and so it is surprising perhaps that it would be another five years before the cannibal boom and market saturation occurred. Although we may never know why, one could attribute it to the rise of the gialli during this period and the lack of interest held by Italian audiences in these films increasing the financial risk to film companies.
However, times and tastes changed and by 1977 audiences wanted to see white folk get eaten by supposedly backwards, uncivilized savages and were willing to pay for it. It would be the soon infamous, Ruggero Deodato with ‘Last Cannibal World’ kick-starting the sub-genre with the standard fish-out-of-water tale as a group of oil prospectors crash-lands into the jungle and run foul of the natives. A lot more brutal than Lenzi’s earlier cannibal effort, Deodato shows us the graphic and sometimes sexualized violence and torture that would become synonymous of the films and rather regrettably for the director himself even if he did not shoot them, the film continued the burgeoning tradition of scenes of real life animal killings were shot in order to boost popularity with the Asian market. Relatively successful all over the world, Deodato would provide the true blueprint and benchmark for others to follow.

Growing in popularity with the people, if not the film critics, soon even big name stars would feel the wrath of cannibal clans, with Stacy Keach and former Bond girl Ursula Andress appearing in journeyman Sergio Martino’s only cannibal film, ‘Prisoner of the Cannibal God’ (1978) which at least added some legitimacy to the sub-genre and may have contributed to the momentum of the cannibal boom, However, 1980 proved to be the watershed moment for the sub-genre as Deodato unleashed his second foray into the genre with Cannibal Holocaust which not only raised the bar cinematically but also in terms of controversy due to its graphic and realistic nature, resulting in the director having to go to court to prove the actors were actually still alive! 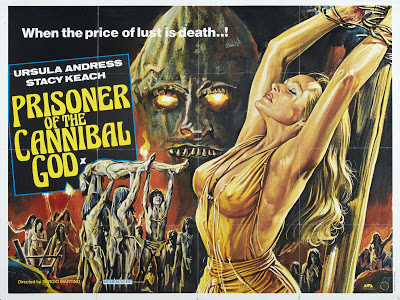 Splitting critical acclaim and received positively by audiences the film proved a huge success returning far far more than its modest $100,000 budget. What made this film so special wasn’t just the extreme violence but also the cinematography as a large element of the film utilises a found footage technique designed to mimic the mondo films of the early 70s, also we must not do a disservice to the superb plot and the questions it raises regarding our own civility to others and how we perceive other cultures and this is something that makes the film stand out from its peers, whether intentional or not. Although that’s not to say it is all positive, the film features, as had become the normality, several scenes of unnecessary animal cruelty for which the director would be indicted for back in Italy.

Hot on the success of Cannibal Holocaust, would be Lenzi’s return to the sub-genre which he helped create with Eaten Alive (1980) and Cannibal Ferox (1981), both moderate successes with the later highly recommended to fans of Cannibal Holocaust. It even uses a few of the same locations and actors! Of particular note for recommending Cannibal Ferox is the delightful way in which Italian horror star Giovanni Lombardo Radice is dispatched, a truly visceral experience and the punishment faced by his female compatriot, potentially even displaying some influence from Hooper’s ‘The Texas Chainsaw Massacre’ (1974).

Other notable films of this period included the mis-titled ‘Zombie Holocaust’ (1980), Mondo Cannibal (1980) and the unique, well for the sub-genre anyway Antropophagus (1980) which deviates from natives to a shipwrecked insane cannibal. 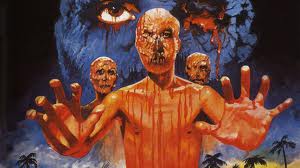 Unfortunately, Cannibal Ferox marked the decline of the sub-genre in both quality and output as tripe such as Massacre in Dinosaur Valley (1985) aka Cannibal Ferox 2 sought to cash in on the home video market disappointing many fans with its attempts to trade off the earlier success of Lenzi’s enjoyable film.

While cannibals still remain on our screens today, albeit through different manifestations and artistic influences (from Hannibal to Wrong Turn) and despite Eli Roth and Quentin Tarantino professing their love for the style, there was around a 20-odd year gap from the last Italian cycle before one jungle cannibal film made it out alive to tell its tale with a major release, in the form of the 2007 released ‘Welcome to the Jungle’ which sought to almost repackage ‘Cannibal Holocaust’ but lacking both the shock factor and potency of its influence it failed to ignite any further interest in the genre. 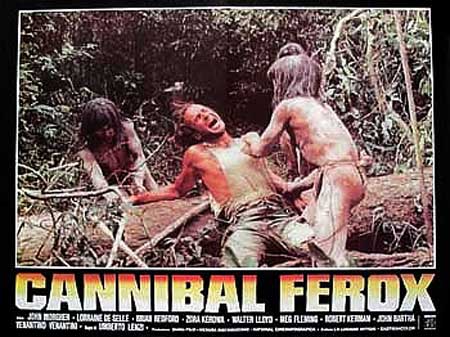 However, all that might change with the upcoming release of Eli Roth’s ‘The Green Inferno’, (not to be confused with the 80s Italian Jungle action movie) which is sure to be well marketed and true to the Italian legacy of jungle cannibal films but will it be a success? Or have we all become bored with the plethora of meat cooking shows already on our screens? 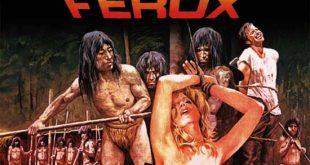