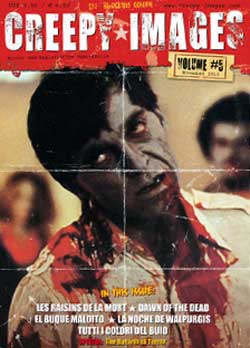 A Fresh new copy of the magazine “Creepy Images” arrived today, of which I proceeded to secure some proper viewing time to just soak in the images within. We’ve covered all the previous issues which in fact are all of importance especially to horror movie memorabilia collectors, though at least for the moment, it never ceases to amaze me, someof the gems that are dug up and presented here. The magazine which is obviously German originated is presented in full English text.  Burrowing thru, you won’t find many magazine like this that features on the same page……a man making out with a severed head and a naked woman being nailed against a wall. Yes this and more are a bit of what makes up this collector feature item magazine.

The issue features a great section on some old “Dawn of the Dead” promotional materials and lobby cards that were all titled per the French film title of “Zombie”. Now I don’t know about you, but I never really get why the title “Zombie” was SO overused as a film title. “Dawn of the Dead” was perfectly fine and at the time there was already a mass confusion on the Fulci title of “Zombie” which was already a mix up with its sequels by the same name.

I’m guessing if the Internet was around the titles would have been alot more specific. “Creepy Images” has also included a small sampling of the French promotional booklet that was circulating with the film. “Torture Mill of the Captive Women”…love the title finds inclusion with plenty of retro looking nude shots posted across additional Lobby Cards. It’s formal name is “Foltermuhle Der Frauen” which I cant pronounce and scans of its 20 Lobby Cards make up a nice section. “The Blind Dead” films find there way into the issue again, which seem to be a re-appearing addition. Though of course the art is always different. I’m getting the feeing that those films were really well promoted with all the poster variations distributed about. “All the colors of the Dark” gives us some retro giallo lobby cards. The yellow and green tones they used are quite interesting to say the least. Though “La Noche de Walpurgis” takes that idea even further with a series of colorful adverts cards.

The article “The Rebirth of Terror” provides a helpful introduction on how the system of Theatre art and Lobby cards has evolved on the years. As mentioned, the art originated on a “return back” policy which later made more sense to leave the stockpiling to the theatre holders.

Cool stuff – Check it out!