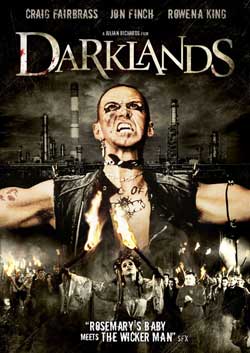 A reporter investigates ritual profanations and finds himself involved with a Druidic cult.

I think the best way to describe this film is to say that it is The Wicker Man meets Rosemary’s Baby (and I’m aware that I’m not the first person to say this). However, it would be an insult to these two movies to place Darklands even in the same league as them. Whereas The Wicker Man was at least vaguely based on a potentially real situation (because the community was closed and didn’t have a vast number of people), Darklands just pushed itself too far (it seemed like every person in Wales was involved in this cult conspiracy. Really?). I strongly oppose movies which insult the viewer’s intelligence and stray miles away from any sort of believability. Because Rosemary’s Baby consisted of a gradual escalation of events, and the cult was (naturally) shrouded in secrecy, the audience is slowly drawn into this other ‘world’, however the cult in Darklands were quite happy to conduct their religious rituals (which involve sacrificing farm animals) in public places and leave it for the world to see. 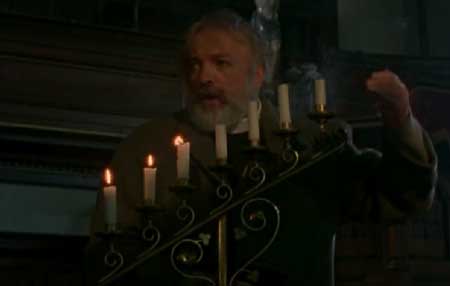 The storyline for Darklands involves a journalist Frazer Truick (played by Craig Fairbrass) who starts to investigate a mysterious cult that has been conducting animal sacrifices for a fair while now (most recently in a church, of all places). He teams up with a new recruit (who just happens to be an attractive young female) and she has some additional information about the cult which sparks his interest even more. The two begin a ‘not-so-professional’ relationship, but Frazer starts to get suspicious of her. In fact, nothing is really as it seems and it is up to Frazer to unravel this plot before it is too late – because there will be serious consequences otherwise, serious personal consequences.

I find it odd that this movie has been described as being part of the ‘revival’ of British horror, because I personally had never heard of it until I sat down to review it (but maybe that was just ignorance on my part). Besides, I feel like too much of it is stolen from other films to truly be described as something innovative and special. Though, it is indeed refreshing to see a welsh ‘horror’ movie, because it’s not something one comes across too often. And I must admit, it did immediately get my attention through its use of violently killing a pig within the first few minutes of the film. Don’t get this confused though, because overall Darklands isn’t too bloody at all. Oh, and there’s a healthy dose of sex for all of those red-blooded males out there (though one of the sex scenes has got to be the most unsexiest one I’ve ever seen – believe me, when you see the movie, you’ll know what one I’m talking about!).

I also find it interesting that, despite being released in the UK in 1997 (so long ago, it was actually released on VHS!), Darklands is only just being released in America and Canada in 2012. What exactly were the delays all about? Well, I decided to use my initiative and look this up myself. The company that were selling the film actually went bust and this forced a battle for the rights of the film. The director of Darklands, Julian Richards himself said that, ‘it took me 10 to 15 years to unravel the legal knot and regain control of the film myself’. Reading this, I did have a new-found respect for Julian Richards for having enough passion and for enthusiasm for the film that he would endure this hideous battle to share it with the rest of the world. 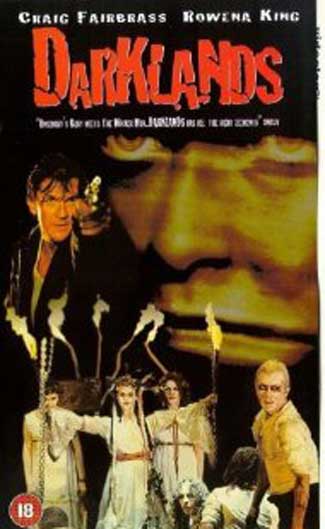 Considering Darklands was Julian Richards debut film (which he wrote as well as directing), I suppose it isn’t quite so bad. Although, I’d definitely recommend him to stick to directing instead of writing – this is ultimately where the film fell down, I reckon. It just so happens that I’ve seen another of director Julian Richards’ movies (called The Last Horror Movie) and it was most bizarre, but it was different so I give some respect to it. I reckon that Julian Richards could potentially climb the ladder within the film industry, as he just keeps getting better and better, and this is exactly the direction you’re meant to go in!
My main criticism for this one would be that there didn’t seem to be any purpose behind the actions of this cult, and I genuinely believed that if I continued to watch until the end, this itch would be scratched. Sadly not. I simply do not understand the motivations behind the cult and exactly what benefit comes from this human sacrifice that they’re all so obsessed with. And I wonder how and why Frazer actually fits into all of this – it just doesn’t make sense. The history of real-life cults proves that they always have reasoning’s behind their actions, no matter now mad it seems to the ‘outside world’. So I think that whoever did the research for this one should take a serious pay cut.

I would say that Darklands is on the worse side of average, in all honesty. I think that some of the ingredients were good, but the combination of the lot just ended up falling flat on its face. This film would have benefited greatly with some answers (decent or otherwise) and a plotline that wasn’t quite so nonsensical!