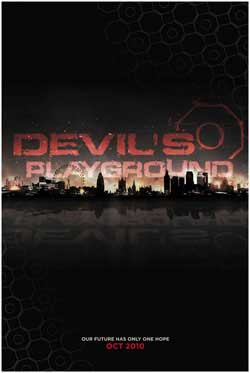 A medical experiment in England goes horribly wrong (imagine that!) and thousands of people are turned into incredibly fast, parkour performing zombie-like creatures. A small group of survivors (including Angela, the only person who was a part of the experiment that didn’t change) struggle to stay alive as they are attacked by the zombies over and over again. Will they make it out alive or are they all destined to be ripped to pieces by the ever-growing army of infected people?

I think that “Devil’s Playground” could have been called “Resident Evil: 28 Days Later” as it pretty much steals elements of both of those films. We have people injected with some mysterious drug (cough, cough, the T-Virus, perhaps?) and then turning into crazed, zombie-like creatures who run like track stars. While the movie suffers from a huge lack of originality (which is its biggest problem) it is at least watchable and once you get past the fact that you’ve already seen it all before it really isn’t that bad.

There are some things that really work for the movie. The “zombies” are brutal, bloodthirsty bastards who gleefully tear their victims to bits. I am more of a fan of the fast zombies than the Romero ones that lumber around like old people with starch in their pajamas (I think the fast ones are a lot more intimidating) so I was glad that the filmmakers made the ones in this film lightning fast. There are a lot of bloody and graphic death scenes here, and as I guy who loves his gore I approve. If you enjoy bloody death scenes as much as I do then you won’t walk away feeling disappointed.

I also really liked the overall tone of “Devil’s Playground” as it was dark and foreboding. There is just a sense of dread and hopelessness here and I wouldn’t want to find myself in the same situation as the characters in this movie. It has a nice end of the world vibe to it and no matter where the characters go they aren’t safe. There are several good scenes where crowds of people are fleeing from their lives down busy streets from the zombies that are very effective (mostly due to the fact they are shot during the daytime) and I think that people who are bothered by the idea of a zombie apocalypse actually happening will be a little unnerved by some of the scenes from this film.

Most of the characters were pretty likable, which helped me enjoy the movie as well. Cole (Craig Fairbrass) is a total badass who kicks ass all over the place through most of the movie. He doesn’t even need a gun in most cases and he kills zombies left and right with a hammer. I also liked Joe and Angela (Danny Dyer and Myanna Buring) even though I thought that the back story about Joe killing the kid was forced and wasn’t really necessary (as was Angela’s if you ask me since it never really goes anywhere and the filmmakers never bothered to explain why she was immune to the effects of the drug that caused everyone else to turn into zombies in the first place). The rest of the cast was pretty good as well even though it is obvious that they are just fodder (but it was nice to see Jaime Murray again, she ruled when she was on season two of “Dexter” a few years ago).

On the other hand the film was not without its share of problems. In addition to being painfully unoriginal it takes forever for anything interesting to happen. I was tempted to fast forward it a couple of times early on to skip past all the bland scenes but I was somehow able to resist. In addition, there are a lot of scenes that are just plain boring. There is too much time spent with the characters sitting around trying to decide what to do next and it gets old very fast. As a matter of fact the entire film runs like this: Zombies attack. People fight with the zombies. Some people die. People sit around talking about what they should do. Zombies attack. Repeat several times for 90 minutes. I also found parts of it to be a little confusing as well (what was the point of the experiment? Do they ever say?) but that could have been because I was so bored with what was going on I didn’t fully pay attention at times. 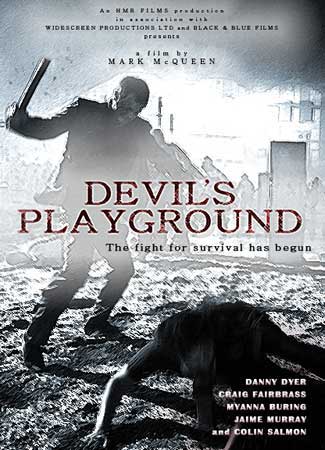 “Devil’s Playground” wasn’t anything new or fresh that I hadn’t already seen hundreds of times before. I liked that the zombies ran and that there was a lot of violence and gore, but would I watch it again? Probably not. I think that fans of “28 Days Later” (and those who have never seen a zombie movie before) may be into it while others will think that it is nothing really that special. Check it out if you are curious about it but don’t expect anything amazing.