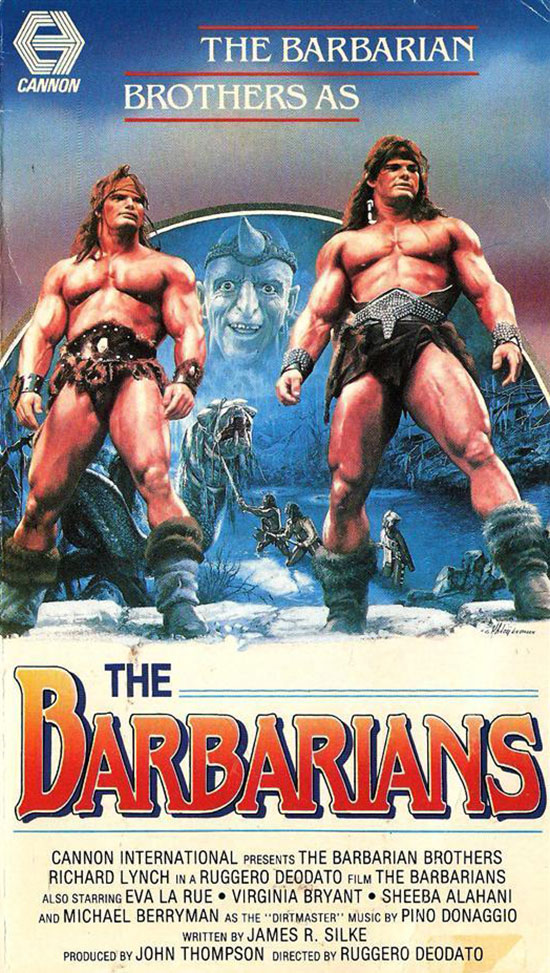 Two twin barbarians seek revenge from the warlord who massacred their tribe and captured them when they were small children.

In Barbarians we have another film starring Peter and David Paul, the bodybuilding identical twins that were making movies for a brief period of time before fading into obscurity. In this particular flick, the duo portrays brothers (I know, surprising, right?) who were adopted by a gypsy-like tribe of folks. The tribe is later slaughtered by a warlord who’s after the magical belly jewel that belongs to the queen. She had one of her minions hide the jewel (by the way, considering the nature of the area she sent him to, she pretty much told him to get himself killed). After the bloodshed, the twins are forced into slavery until adulthood. They make their escape and seek to save their queen, who is still held captive by the warlord. This leads to them reuniting with the gypsies and questing to reclaim the jewel while introducing the world to the horror of mullets. They’re also joined by a female thief who ends up being the brains of the operation since the brothers are dumb asses. 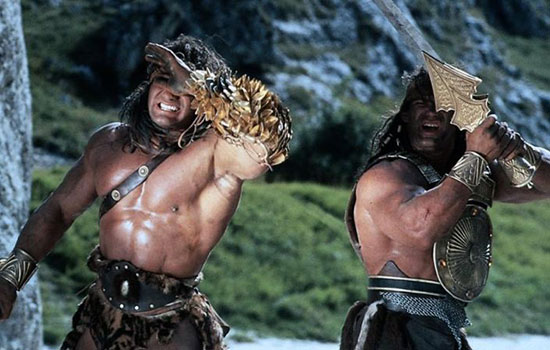 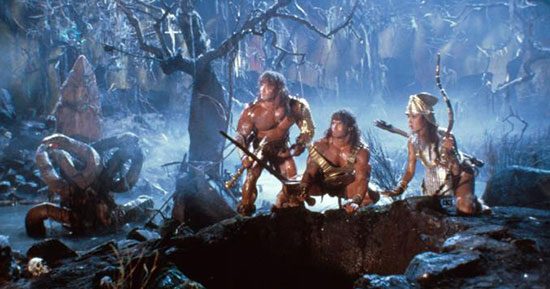 This a low-budget film that was made to cash in on a trend that pretty much already dried up (sword and sorcery movies). As such, it’s filled with a lot of flaws. The biggest glaring problem is the overall story itself. Filled with all kinds of cliches you’ve seen in a dozen other films designed to rip off Conan the Barbarian, this movie also has some serious logic gaps that pretty much stops the whole film from making a lick of sense. For instance, the king who started up the tribe of wandering entertainers was supposed to be wise. The reason provided to the audience is decided to take a magic jewel that provides special powers related to entertaining people instead of choosing riches or anything else. Personally, I think it’s a sign that he was a freaking moron. I think his people would actually prefer things like, I don’t know, maybe a kingdom where they can live in security with a decent economy. Instead, he forces them into a life of being traveling minstrels because that’s a much better option than mundane things like stability. He felt it was more important to have a mystical gem that never shows any real power throughout this movie’s runtime. The film’s narrator that this traveling group was beloved by all the kingdoms, because, you know, that’s how it’s always been for gypsies. Of course, if you believe that last part, then I have some fantastic bridge property in Brooklyn to sell you.

It also makes you ask, why the hell does the evil warlord want this gem so badly? Sure, it’s magical, but that magic only extends to entertainment like singing and dancing (we’re not sure how, though). The movie never establishes why this would be useful to the villain. I mean, if they had at least provided some form of explanation, that at least that would provide some form of motivation for his actions. For instance, they could have said he found a way to subvert the magic to other, more nefarious purposes. That right there may not be the most original concept, but at least it’s something! I also think my example proves I’ve actually put more thought into the plot than the actual screenwriters. 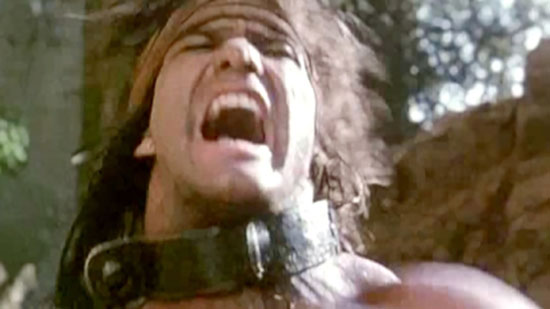 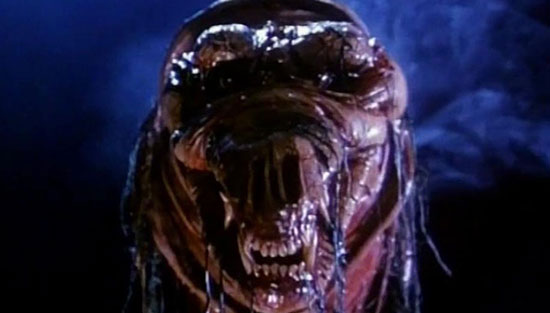 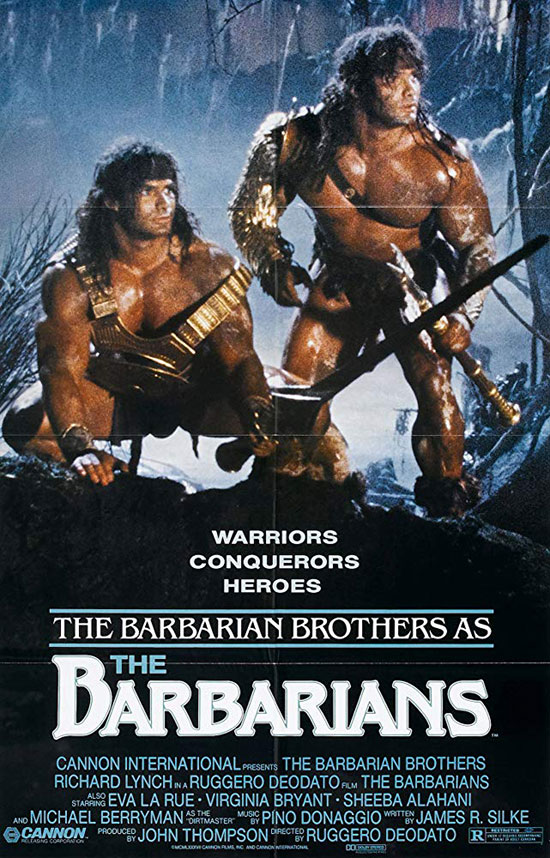 Other problems this movie has is some shoddy effects, including a crappy looking “dragon”, and some not so great acting. Richard Lynch as the main villain is the most interesting character, and Lynch provides the only decent performance in the whole film. The only other actor worth mentioned that actually had a long career in the industry was Eva La Rue. She never struck me as a great actress, but she’s at least serviceable (which does tend to make one look great when surrounded by terrible performers). 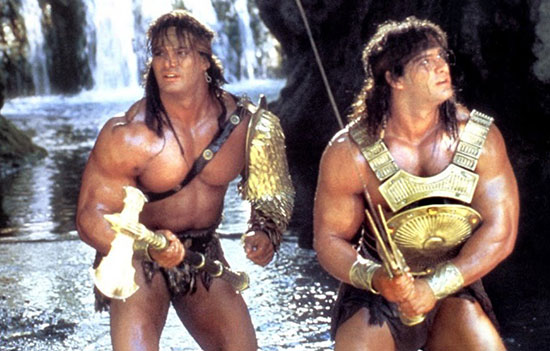 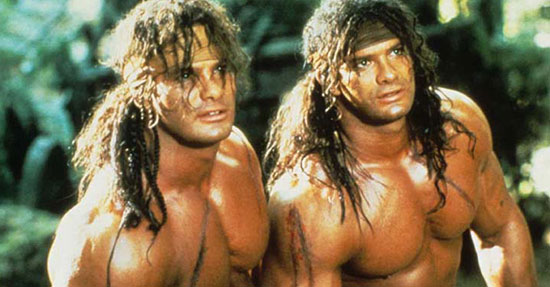 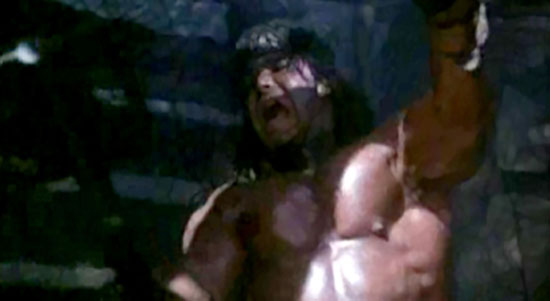 That’s not to say that everything was bad. The film still had enough of a spark to make it amusing. Peter and David Paul show the same kind of comedic timing that they did in the other film of theirs I reviewed, and that helps balance out their lack of acting ability. Another nice touch is that their characters are kind of dumb, and they never get conveniently smarter when the script calls for it. Eva La Rue’s Ismene is always the smart one of the group, and more than holds her own in times of danger. I was surprised at the level of consistency in the characters, and also by the fact that Ismene wasn’t used to be a constant damsel in distress. 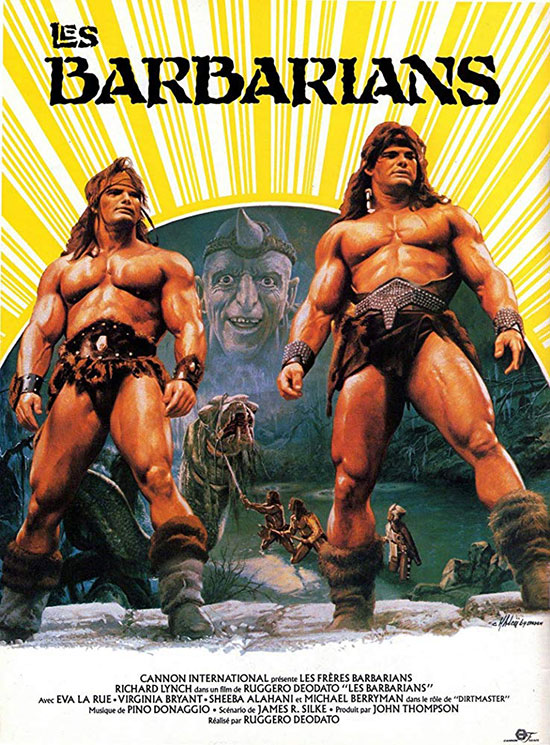 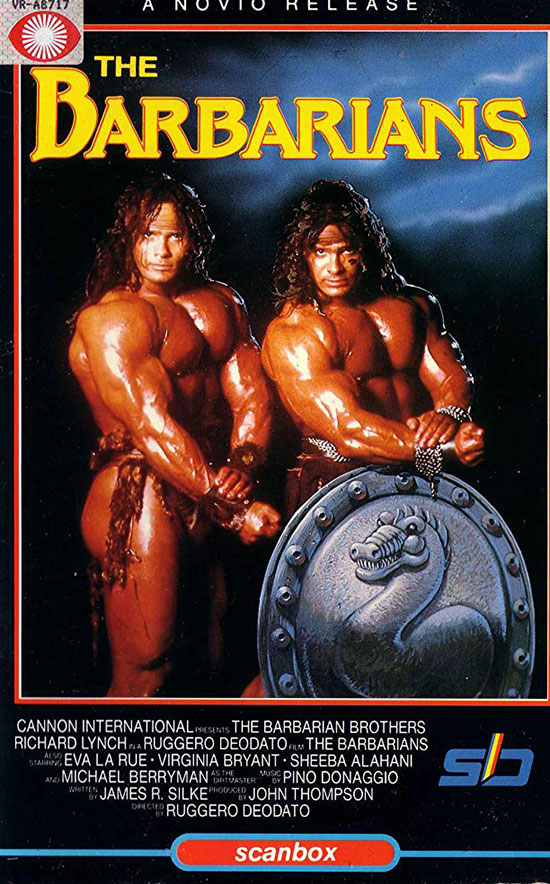 With that said, it was Queen Canary, the leader of the gypsy people, that fills the role of the movie’s professional hostage.

I’m not going to try to pretend like this is a good movie. It’s filled with cliches, questionable acting, and has a pretty nonsense story overall. However, it does have a few things going for it to make it entertaining. The brothers were fairly entertaining and likable, Eva La Rue’s character added some sass, and Richard Lynch made for a fun bad guy (as usual). Is it enough to overcome all the flaws? Perhaps not. However, I didn’t find myself hating the film after the end credits rolled. It’s a mostly harmless way to kill some time, which is the best thing I can say about it.