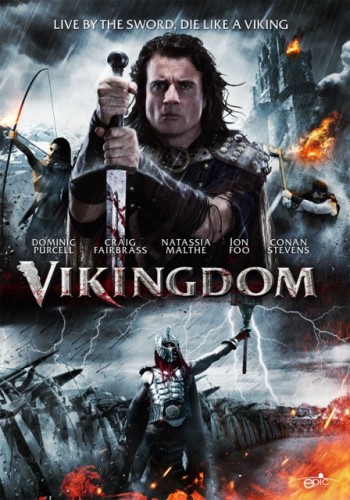 Forgotten King Elrick battles back from hell and beyond to retrieve the mystical artifact, Odin’s Horn, before the Mighty Thor and his army can unleash its powers to conquer the world.

What happens when Thor (Conan Stevens) gets pissed off over the idea that Scandinavia has become awash with the notion of Christianity, forgetting about the Norse gods they worshipped before? He transforms himself into human form and gathers together an army to kick some Nordic ass and overtake humanity! But before he can do that he has to recover some ancient relics that will open up the gates of heaven and hell (at the same time of course) on earth. And he has to get it done before the blood eclipse which happens every 800 years or so and is due to happen again soon! Luckily for all of those 11th century wanna be Jesus freaks in training former (& undead!) king Eirick (Dominic Purcell) has been recruited by Frey (Jesse Moss) to intercept Thor and stop him in his insane quest for power but first he needs to gather an army and recover a mystical horn that when sounded will send Thor back to Valhalla. 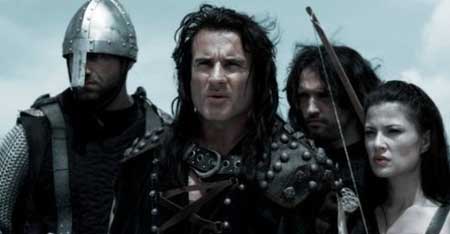 Whew…did you get all of that?

But that’s not even half of it in director Yusry Kru’s madcap Viking adventure Vikingdom: The Blood Eclipse, which is currently my favorite movie of the month. Not because it’s a particularly good movie but because it’s so batshit crazy I couldn’t believe my eyes most of the time, this is some seriously nutty film making!

I don’t even know where to start in trying to describe this movie in a rational manner but I can start with it’s influences. Films like Zack Snyder’s 300 & Robert Rodriguez’ Sin City were the obvious templates that were used while production of this proceeded. There’s tons of green screen work, slow motion action scenes, slow motion fight scenes (replete with slo-mo blood) and an army of topless Viking warriors having at each other with arrows and axes. The difference here is that those aforementioned films had an actual budget and script to work with. Vikingdom: The Blood Eclipse is a Malaysian production and only had $15 million to kick around so while it tries to look epic, it doesn’t quite make the cut. And it’s incredibly dense & overcomplicated plot (Written by James Coyne) which includes elements of The Magnificent Seven (1960), The Empire Strikes Back (1980) & Berserker (1987) makes nearly all of it incomprehensible but despite that I had tons of fun watching it. 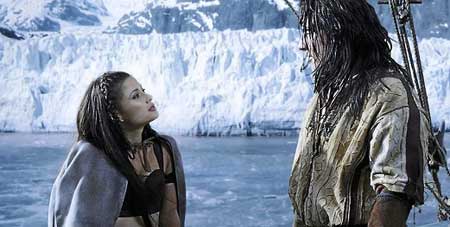 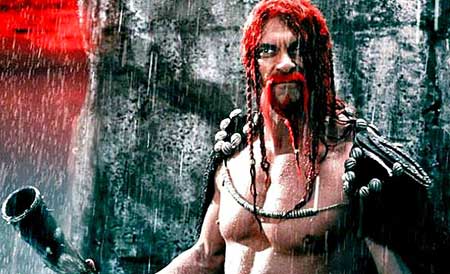 The casting is really bizarre as well but the performances are pretty good overall save for the emotionless Dominic Purcell (Blade 2) as Eirick and this is a problem since he’s in nearly every scene. His flat and free of nuance line readings make it seem like he doesn’t even want to be making a movie, let alone one with all of the speeches Eirick makes here. The character had died in battle but was brought back by his lover (who just happens to be a sorceress, or a god, or both) hence he’s undead (which might explain his zombie-like performance). He’s got the size & swagger of a Viking but none of the bombast necessary to make anyone care about his character or his situation. He looks seriously depressed most of the time (& a bit like Sylvester Stallone too). Craig Fairbrass (Cliffhanger) plays Sven, Eirick’s best friend and his imposing size lends an air of gravitas to his character but his English accent kills any chance of him being believable as a Viking. At the very least he embraces his natural voice and doesn’t try to pull off a Viking affect. Nastassia Malthe plays Brynna, who gets involved when her ship is commandeered by Eirick & company. Luckily she wields a mean bow & she can swing a sword with the best of them. Malthe is drop dead gorgeous and believably menacing but she wears what looks like a leather bikini top throughout the film which just didn’t seem too logical since there’s snow & ice nearly everywhere she travels and she never seems to get cold at all. The wacky script tosses in some kung fu too with the character of Yang (John Foo) who leaps, kicks & punches his way through his enemies with aplomb. 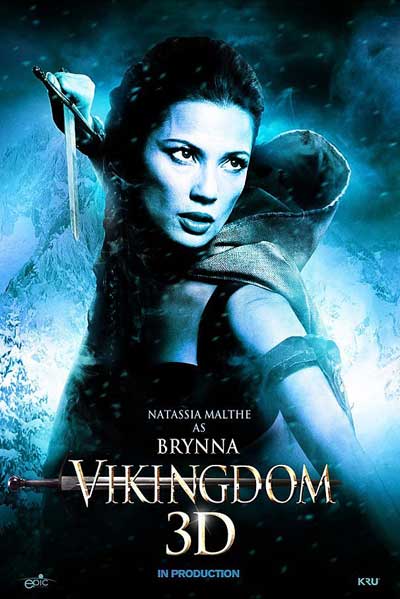 But it’s the character of Thor who stands out most of all here. As played by Stevens, Thor is a surly red headed megalomaniac who doesn’t take too kindly to the idea of Christianity. And while most will hear the name Thor and immediately think of Chris Hemsworth they’ll fall out of their seats when they see the massively imposing Stevens in the role. At over 7 feet tall he towers over everyone else in the cast (& there are a lot of tall guys here) and he carries a palpable sense of menace with him as he slices people in two or removes their eyeballs with his hand. He’s not the best actor around but I sure ain’t gonna tell him that, the man will crush my bones to dust & spread them to the wind in a matter of seconds… 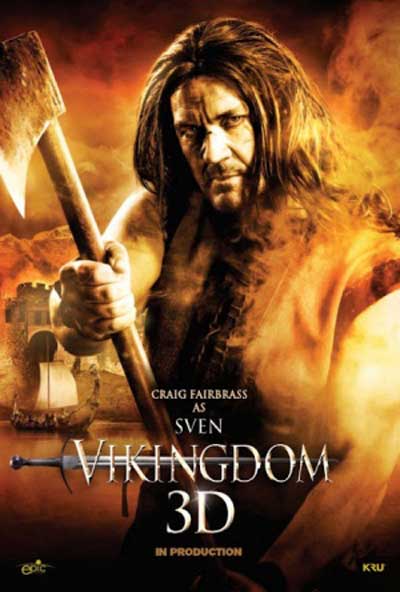 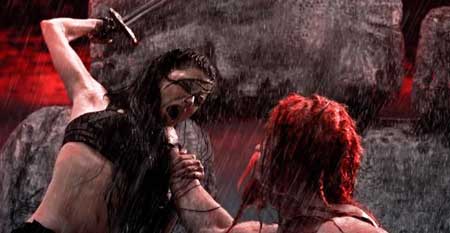 Vikingdom: The Blood Eclipse is violent but not overly so. The blood on display is mostly CGI and not always convincing but the battle scenes have a bit of heft to them and (on a few occasions) I heard a satisfyingly unnerving THUD when an axe landed in someone’s chest. But most of the CGI effects are decidedly low rent and a lot of them look rushed or unfinished. Production design on a period adventure like this one is important and while Tommy Mansur does a decent job there are still some scenes that just featured some plastic rocks & nothing else and those scenes looked awful. A few scenes look great but most look like they were filmed at a Medieval Times theme restaurant (the really awful wigs don’t help much either). There’s also what I think was supposed to be a dragon chasing our hero around in one scene that literally had no torso, just a head attached to a set of limbs pretty much. I couldn’t tell if it was a CGI construct or a man in a suit (Most likely a combo of the two) but it reminded me a lot of some creatures featured in a film called At The Earth’s Core, which isn’t too good since that movie’s creatures were of the Man in a Suit variety and it was released in 1976! In other words, it’s a silly looking creature but it’s only onscreen for a minute or two and you will most definitely get a laugh out of it. 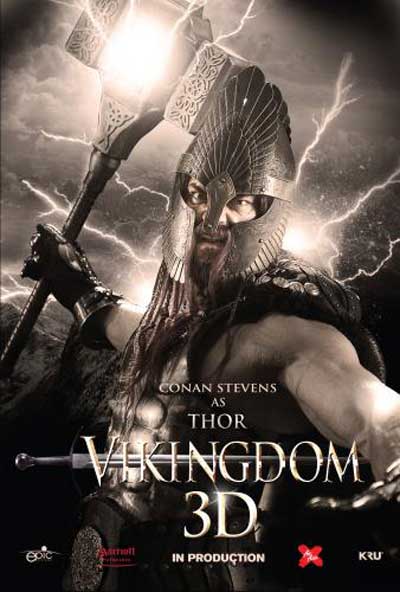 I have to give everyone involved credit for really overachieving here but sometimes shooting for the moon with a pea shooter ain’t gonna cut it. The film makers ambitions ruined what could’ve made a decent low budget flick but I gotta admit being wildly entertained by the whole thing…messy as it is. Some of it looks really good, some of it really cheap but none of that matters in the end since it had me grinning pretty much from the get go. And like I said earlier, despite it’s faults, it’s my favorite film of 2014 so far (never mind that today is January 16th wiseguys…)!

Vikingdom: The Blood Eclipse – 3 out of 5 shrouds.

Vikingdom: The Blood Eclipse (An EPIC Pictures Group film) will be released to DVD and Digital Download on January 21st.