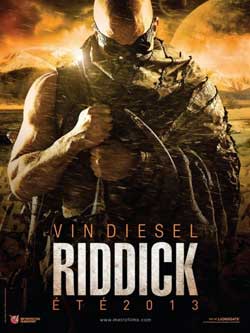 Left for dead on a sun-scorched planet, Riddick finds himself up against an alien race of predators. Activating an emergency beacon alerts two ships: one carrying a new breed of mercenary, the other captained by a man from Riddick’s past.

Nine years after the totally wrongheaded The Chronicles Of Riddick” & thirteen years after Pitch Black, we have a brand spanking new film featuring the continuing adventures of Richard B. Riddick (I like to call him Dickie Riddick myself) in a new film called…Riddick. The word on the street is that executive producer/star Vin Diesel mortgaged his home in order to finance this new film. Now the question is was that a wise decision for him to make? 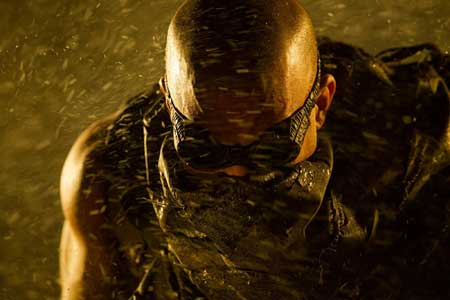 The film starts out pretty much as expected. We find Riddick back on the planet on which he had crashed onto in the original film, stranded and left for dead. How he ended up back where it all began is handled in the first five minutes of the film (Featuring a quick cameo from Karl Urban) which gives this film a link, however tenuous, to Chronicles…. Afterwards we get fifteen minutes of Dickie showing off his survival skills to everyone in the audience and while these scenes are actually pretty entertaining in a Discovery Channel fashion, they don’t illustrate anything about the character that we didn’t already know. Perhaps the filmmakers were trying to enlighten those of us who haven’t seen the previous two films in the series as to the manliness of the character? I use the word “Manliness” because as it stands here in this film, Riddick is apparently the toughest mofo who’s ever lived. 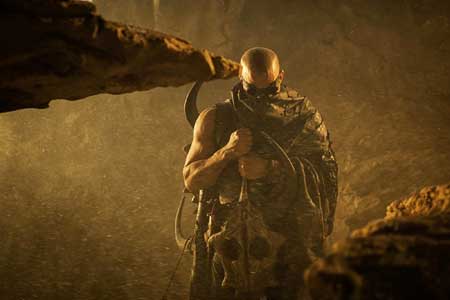 After the lengthy introduction to his super awesomeness (And the domestication of a dog/hyena/zebra critter that Riddick takes as a pet), the film goes falls right back into a standard action/adventure film featuring a gaggle of unremarkable (& interchangable) stock characters portraying bounty hunters who (After receiving a distress call from Riddick), land on the inhospitable planet looking to collect the bounty on his shiny bald head. Lead by Santana (A great performance by Jordi Mollá) this group of men are destined to die as soon as they show up onscreen, so much so that they might have well had red shirts on. But pro wrestler turned actor Dave Bautista makes a strong impression as Diaz, one of the men in Santana’s employ. They are soon joined by another group of bounty hunters, led by Johns (Former professional rugby player Matt Nable) and although they’re pretty much stock characters as well, one of them is played by Battleship Galactica’s Katie Sackhoff, and as Dahl she not only offers the only estrogen to be found in the entire film, she kicks a lot of ass too! 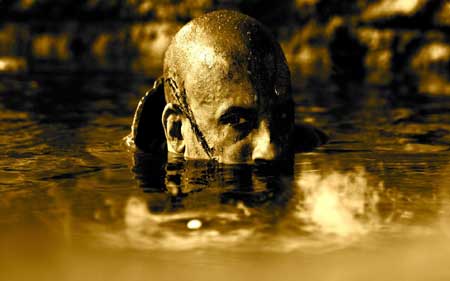 Of course there are the creatures that infest the planet as well. Same as in Pitch Black, they only come out at night and there are literally thousands of them to boot. Blind but sensitive to sound and voraciously hungry, they’re just as imposing now as they were back in heir film debut and the film really picks up a nice head of steam upon their introduction. The problem is the film doesn’t get around to that intro until about 3/4 of it has passed by and by then it’s a case of “Too little, Too late”. In all fairness, Patrick Tatopoulos’ creature designs are just as fabulous now as they were then with the creatures featured in the beginning of the film especially bizarre yet oddly believable at the same time. We just don’t see enough of them for my taste. 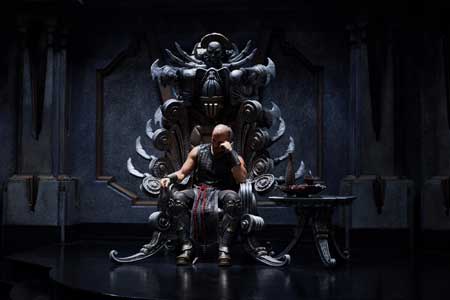 And therein lies the rub. It’s obvious that returning writer/director David Twohy wants to return to what made Pitch Black the success it was but Riddick aspires to be a clone to it and nothing more (Why it wasn’t subtitled “Pitch Black 2” I’ll never know). It isn’t that the film isn’t exciting, it has its moments. It’s also relatively exciting and the gore level is amped up quite a bit from the previous two entries so there’s plenty of the red stuff to go around. It’s got some really good performances to drive the film forward as well. But it’s so overwhelmingly ordinary in every other aspect of its production and so similar to its predecessors that it all feels rote and stale. Diesel brings nothing new to the character after all of these years and maybe that was the idea, but at least they tried to give Riddick a bit of a backstory in The Chronicles Of Riddick and while that was a really bad film, it tried to do something different with the character. Here he’s just a deep voiced, nearly monosyllabic bear of a man who simply will not die, no matter what the circumstances.

Some of the visual effects are cheap looking and there are some visible matte lines in a few scenes but I’m guessing that’s due to the much smaller budget they had to work with here. They aren’t dealbreakers though and don’t take away from the above average look of the film. All other tech credits are up to snuff and the film does manage to look as good as it can considering its minimal size and scope. 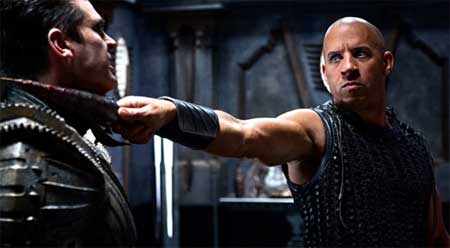 But I’ll be danged if I wasn’t bored of it all after awhile! Diesel carries the film adeptly but a script that hems so slavishly to the original film isn’t what was needed for the character of Riddick this time around. Riddick isn’t bad enough to be enjoyable on a purely cheesy level but it isn’t good enough to be enjoyable on any other level either. It just sits there like a lump, going through its (Very predictable) motions hoping that nobody will notice how meh it all really is. But it certainly isn’t the worst film I’ve seen this year, it’s biggest crime is that it aspires to be nothing more than a rehash.

And if Diesel feels like he can mortgage his home to finance a film that has no real aspirations then who am I to question him? Good thing he has that “Fast and the Furious” franchise to help him pay the mortgage…

Riddick (2013) is now available on blu-ray per Universal Studios