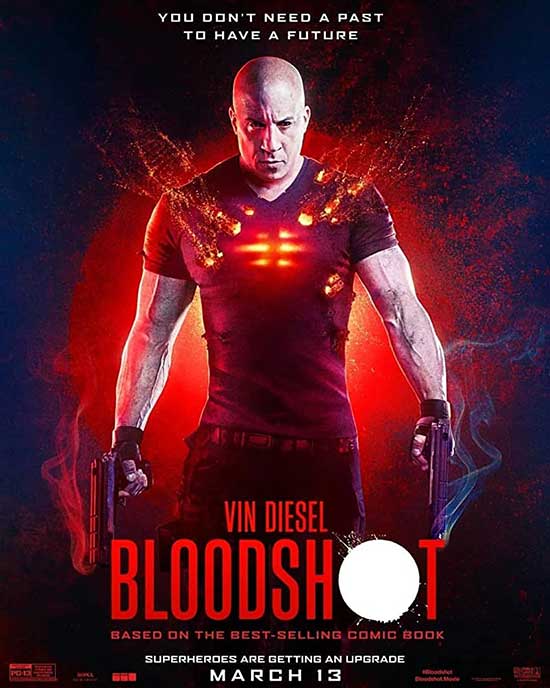 Ray Garrison, a slain soldier, is re-animated with superpowers.

Unless you’ve been living under a rock for the last few years, there’s no way you can have missed the impact comic book adaptations have had across the entire movie industry. From Marvel’s all-conquering Avengers and their numerous spinoffs to DC’s Batman, Wonder Woman, Aquaman et al, these once niche characters have exploded onto the scene and propelled themselves to box-office glory across the globe. Many less well-known comic book properties have hit big too, such as Guillermo Del Toro’s Hellboy movies (less so the recent Neil Marshall reboot), Men In Black and Guardians Of The Galaxy – which means movie studios have an increasingly eager eye out for any comic book characters that haven’t yet been adapted to the silver screen, in hopes of turning a massive profit.

One of the latest adaptations hoping to clean up is Vin Diesel’s Bloodshot; directed by David S. F. Wilson, this 2020 movie however fell short at the box office, finding itself caught up in the COVID-19 pandemic and being made available by Sony for streaming just two weeks after its début in cinemas. The movie is based on the Valiant comic book character of the same name, and was originally intended to star Jared Leto in the lead role, having been in gestation since 2012. As with most comic book properties, the plan was to kick start a long-running (and money-spinning) franchise in the vein of Iron Man; given the current lacklustre take of $29 million against a relatively modest $45 million budget though, it’s possible that Bloodshot will follow the lead of Universal’s vaunted Dark Universe saga and fall at the first hurdle.

Vin plays Ray Garrison, an elite special forces soldier; we meet him on a mission in Kenya engaged in his favourite activity of shooting everything that moves (whilst looking super cool in various slow motion shots). In a lengthy pre-credits sequence, Ray falls foul of bad guy Martin Axe (played by Brit actor Toby Kebbell, doing a slightly iffy Australian accent; check him out in Dead Man’s Shoes if you’ve never seen it). I’ll be honest Bloodshot went a long way towards winning me over thanks to Kebbell’s turn here; any movie where the villain makes his début in an abattoir, wearing a bobble hat, anorak and socks with sandals, and body popping to Talking Heads’ “Psycho Killer” gets an instant pass from me.

Once the pre-credits sequence – at the end of which it would appear Garrison has been summarily executed – is out of the way it’s business as usual for Vin as it’s straight on with his trademark white wife beater shirt; spoiler alert, he isn’t dead after all (would have been a short movie if he was). We’re introduced to Guy Pearce (an Australian actor doing an American accent – they like to mix things up here) as Doctor Emil Harting of “Rising Spirit Technologies” who lays on the sci-fi exposition nice and thick for us.

Turns out Harting and his crew have saved Garrison’s life – after his officially deceased corpse was kindly donated to them by the army – by grafting various enhancements onto his body. And guess what, Garrison has no memory of any events up to his death – he’s basically a blank slate. Before long though he overhears Psycho Killer again and all those repressed memories come flooding back, triggering off a rampaging revenge-driven killing spree.

It’s at this point you may start to spot the obvious similarities with other movies, notably Robocop at this point in proceedings. Before too long there are plot points lifted directly from The Matrix too (Ray can instantly download instructions on how to fly jets). Bloodshot definitely belongs in the science fiction category as it’s not a horror film; there are some decent gory shots though as it’s definitely going for a more adult-oriented approach. It’s actually quite a handsomely shot film, in a Michael Bay kind of way – there are lots of sunsets and low, revolving camera angles. There’s lots of use of the Zack Snyder “speed ramping” effect too, with the slow-fast-slow approach quickly getting tiresome when shoe-horned into action sequences.

The special effects are mostly impressive – although there’s the occasional descent into Matrix Reloaded horribly rubbery CGI fight scene shenanigans, there are some truly stunning sequences, not least being the digital recreation of an artificial world around Garrison and Harting, pixel by pixel. And much of the action has a solid, weighty feel to it. It’s a shame then that one of the biggest problems with Bloodshot is one that affects many superhero and comic book movies; there’s just not really any sense of threat. Garrison is so over-powered he’s nigh on invincible, and you never really feel he’s in any danger from the bad guys.

Vin Diesel is not on bad form here – I counted at least three different facial expressions so he’s definitely trying. Guy Pearce is as dependable as ever, and Eiza González as Garrison’s ally K.T. brings a surprising depth to her character. Best of the lot for me though was Lamorne Morris as Wilfred Wigans, who does a good job of taking a vastly overused character – the geeky comic relief IT genius sidekick – and actually making him likeable and interesting. And the story does a fair job of keeping most of its twists hidden – a couple are a little obvious, but for every one of those there was another I didn’t immediately see coming.

It’s a shame that Bloodshot immediately brings to mind better movies like Robocop and The Matrix – and Leigh Whannell did the R-rated bio-enhanced reluctant hero shtick much better with 2018’s Upgrade – as it does have a lot to offer. It’s edited well and clips along at a fair pace – it’s never boring as we’re thrown into another action sequence at regular intervals. There are a few plot holes, and no shortage of clichés (the two hackers battling with each other by smashing random keys on a keyboard as fast as possible; and as a biker a pet hate of mine, a motorcycle chase where instead of using a bike’s natural advantages of speed and manoeuvrability the rider spends 95% of his time doing burnouts, wheelies and stoppies) but overall Bloodshot is highly watchable and, while not offering anything particularly new, is very well put together. Only time will tell if the obviously planned sequels will ever see the light of day.